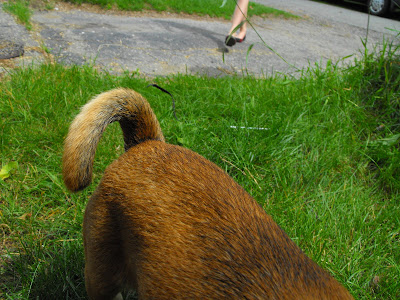 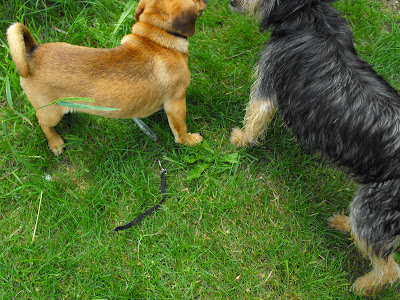 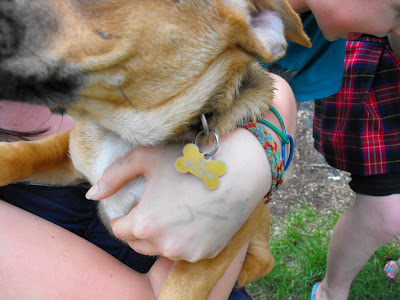 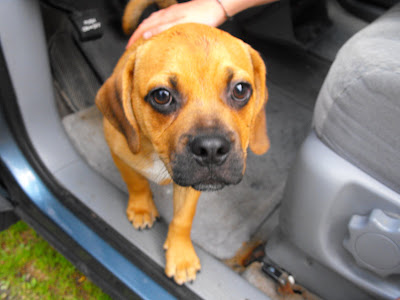 The weekend draws to a close at the Last House and I couldn't rest easy tonight without saying something here. Do I have a syndrome? Probably. Am I making it worse by indulging a little hit of blogging? Probably, but there you have it.

Our friend Annmarie,an architectural historian from Quebec, came by with her daughter who is a little younger than the Understudy,and their new "Puggle", "Snoopy." Snoopy may be the cutest creature since the Pygmy Jerboa ( q.v.).

We had lunch outside. The girls choreographed a dance to a Jonas Brothers song and and danced it for us all. Annmarie and I sat outside on the breezeway drinking Diet Dr. Peppers and complaining about not having enough money while Whusband led the kids and two dogs to the river at the back of our property. As I write, Whusband is trying to watch Madama Butterfly on PBS and getting irritated at us all for making up our own arias and singing along, e.g., "Now my life is going badlyyyyyy". And, "O why is my son is a plaaaastic puuuuuppettt!" (Which is true in this production). The kids asked why Madama's child is a plastic puppet and I said it was because his father was plastic.

Whusband did not approve of the Jonas Bros. as the soundtrack for the lives of our children.

All in all, a fine sort of Sunday.


Puggle puppies are difficult to photograph, as evidenced by the little photo essay above.

David Sedaris hardly needs any publicity from the likes of me, but
On Friday evening I rode home listening to him read essays from his collection "Dress Your Family in Corduroy Denim." I laughed so hard at the first essay that I almost wet myself (sorry, but true). I checked the New Yorker website and that essay is available only in abstract unless you subscribe, but here's another Sedaris gem for your reading pleasure. I hope it may finish your weekend the way it started mine (the laughing, that is, not the near-peeing). 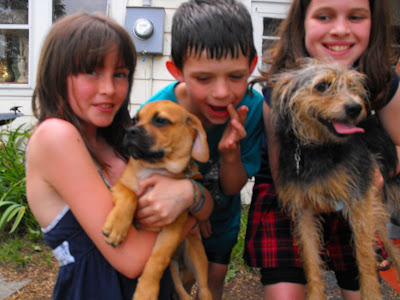 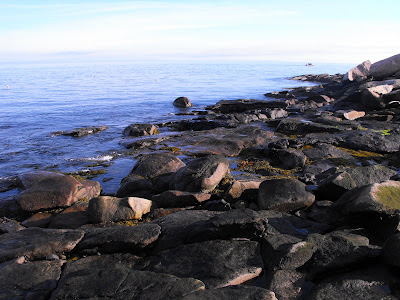 Mom's still here, eating ice cream just now and watching something on TCM, so I am sneaking in some computer time.

We have been back and forth to Gloucester, Mass., visiting Mom's identical twin sister and her husband at their Fisherman's Cottage smack dab on a rocky cove on a hidden corner of Cape Ann. It was worth three nights on a fold out sofa.

This morning I snuck out of the house early for a walk on Jay Peak with Maisy.

In case your own relatives or co-workers haven't buttonholed you lately to force you to look at their vacation pictures and you've been hankering for that experience, here are a couple little postcards of our recent travels. 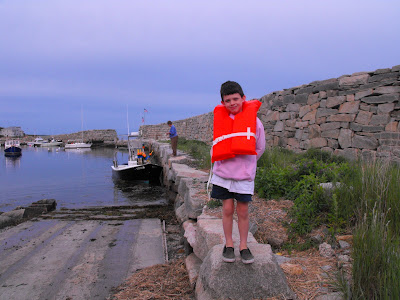 Shackleton went lobstering... That's my aunt in the background keeping my uncle's boat from floating away. 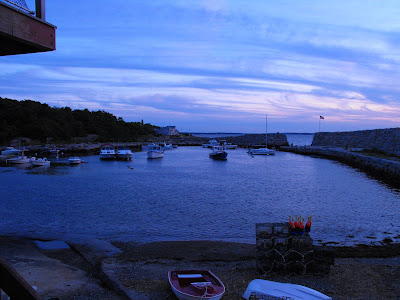 This is their front yard; a tame, wee bit of the Atlantic 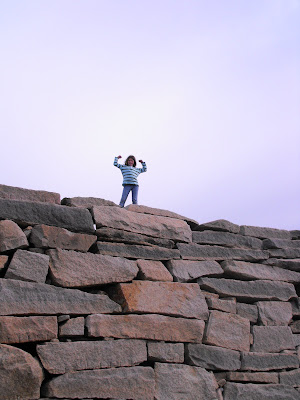 The Understudy conquered the seawall 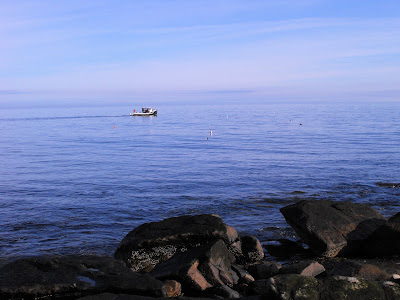 It's all like a postcard there when the sun shines, which it did for about 10 minutes.


This Morning in Vermont: A Bad Day for Skiing but Not Too Bad for Walking with the Dog 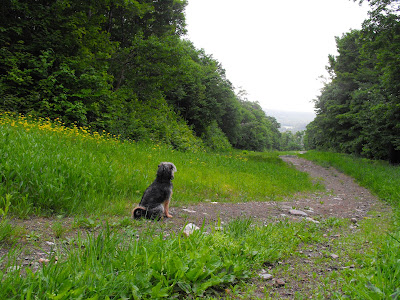 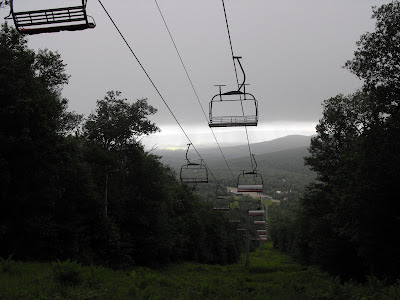 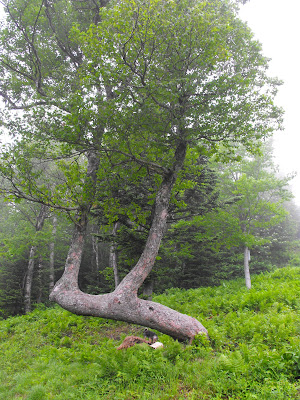 I have photographed this tree before, on the flanks of Jay Peak. How did it get that way?

Oh, and we got chickens to raise here at home last week. We moved them off the porch last night and into Whusbuand's "chicken tractor." (A coop on wheels). I'll keep you posted. Maisy is tormented by the sight of them, so close and yet so far behind the chicken wire. 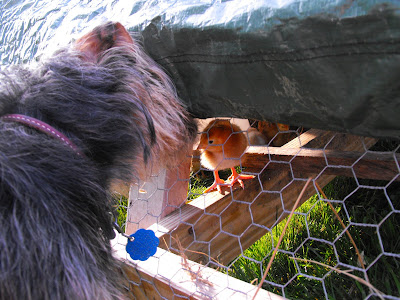 The sun was out on my long drive home tonight, after two days of rain. The sky was blue with cottonball white clouds hurrying by. There was a fresh breeze that moved the leaves without turning them the wrong way around.

I had to stop at the drug store next to McDonald's in Morrisville to get some lip balm. (Why chapped lips in June?). The important part of the previous sentence is "next to McDonald's". It was dinner time. Yet, I resisted the lure of a filet'o fish, strawberry shake and fries. "Away from me Filet 'O Fish Satan!" I thought. (I didn't actually say this out loud, you'll be relieved to know). And I pushed that evil filet'o fish away, and bought my lip balm and continued my trip north, fishless, fryless, shakeless. A small victory for self control.

Now, (this next bit seems like a digression but hold on to the end) remember the "imagist poets" from 10th grade English class? Here's a quick refresher:

so much depends
upon a red wheel barrow
glazed with rain
water
beside the white
chickens.

In a Station of the Metro

The apparition of these faces in the crowd;
Petals on a wet, black bough.

Nice, easy sledding in English for once (even if a bit bewildering at 16).

I was thinking of the imagists as I rounded the first corner after leaving the drug store -- maybe because there is a Mennonite bakery straight ahead at the traffic light called "The Red Hen". 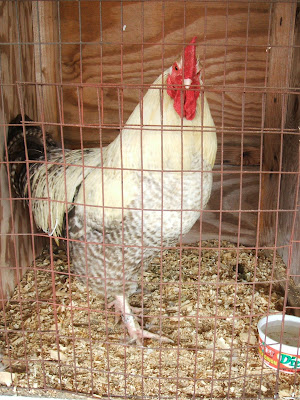 It was closing time at the Red Hen, apparently, because a pretty, young Mennonite woman was locking the front door. The thing about the Mennonite women, or at least whatever group of them have settled around here, is that they dress like they are on their way to Sunday school, in the Great Plains somewhere, in about 1878: long dresses, aprons, hair pulled up tight under a white cap at the back of their heads, you get the picture. The red light lasted long enough for me to see the store keeper pull the door closed, crank the key over hard in the lock, and then to hop into her black Volkswagen Jetta.

Is there not an imagist poem in there somewhere? Would you write it and send it on?
Maybe I'll do one too.

While we're on the subject, we drive by a big Mennonite farm in Hyde Park, Vermont almost every day. My kids are always craning to see the little girls who live there, since they look like they walked off the set of Little House on the Prairie.

There is a wooden sign in the front yard of the farm house with a message that gets changed from time to time. This winter, for a long time, it said "The Earth Will Be Burned Up." Hmmm. I don't suppose there's any disagreement about that. The question really is when and exactly why. We'll leave that discussion for someone else's blog. The sign was changed this spring to "Jesus Knows Your Thoughts". Recently, however, another sign has been added to the lawn. It is hand painted and stands right behind the religious warning. It says, "Fresh Brown Organic Eggs." Invariably, I think, well, I can't remember what I was thinking (probably, "we're late" or "I'm going too fast for this curve") but, Lord knows, now I am thinking of "fresh, brown organic eggs." Perhaps this is a bit of thought-craft by a clever Mennonite...?

I am supposed to be cleaning the kitchen/weeding the garden/preventing the children from burning themselves over the remains of the charcoal that cooked tonight's hamburgers as they melt marshmallows. My mom is coming for a 10 day visit on Tuesday and believe me when I tell you we are not ready... People who have been living in refugee camps in Africa might prefer their present accommodations to what we have on offer at the moment. So, I am not sure when I can get back to writing here and visiting my usual haunts but I will eventually. Meanwhile, I hope anyone who managed to read this far has a happy weekend.
Posted by Kim Velk at 7:27 PM 7 comments:

Email ThisBlogThis!Share to TwitterShare to FacebookShare to Pinterest
Labels: Vermont.

Not sure anybody noticed but I've been away from my crumbling keyboard and out doing stuff in the real world, namely traveling to old New York to see my Dad turn 70 in the company of many far flung relatives. We gathered under a tent in the side yard at Dad's and caught up on the last five years or so. It was interesting that this was made more challenging by my deaf ear. Really, it's gettting to be a problem. Perhaps something must be done, like a hearing aid or surgery. In other family news, my brother (41, long divorced) brought along the girlfriend he has been dating for about four and a half years (Russian, smart) and announced they were getting married. So, that was fun. I also got sick (with a cold) on party day, which gave all the shouted conversations under the tent a fevered haze. I am still hacking and sniffling so you can be glad for this reason, among many possible others, that you aren't actually anywhere near me.

Finally, although no one seems much to have liked my foray into fiction (except that most intelligent, perceptive and kind, not to mention polite, bloggging genius, Mme Defarge), I am think, think, thinking about a bigger writing project. This thinking has taken some of the starch out of my need to write here. (This blog, like many others, is partly the product of the mild OCD and ADD from which I suffer [the attention deficit in my case is that I don't get enough attention]. So the obsession and compulsion being otherwised channeled, well, I guess that's enough said. I'll go read a few blogs now.
Posted by Kim Velk at 8:19 PM 5 comments: