As the World Turns... 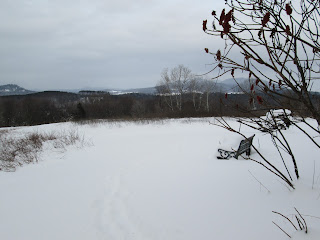 One last spin for 2012.  We are back up at the Last House after too long away for a very modest New Year's Eve celebration.  It will feature Italian Sparkling Wine Product at midnight.  Wooo hooo! The Infanta is off at her own New Year's Eve celebration, a sleep over with friends (one last first for 2012).  So it is just Whusband, Shackleton, Maisy and I.  No complaints though. The snow is fluffy and knee deep here and the world is all pewter and white.  A standing rib roast is in the oven, Maisy is under my feet (in the gap between the wing chair and the footstool).  A fine farewell to 2012 and best wishes to all for the year ahead.
Posted by Kim Velk at 4:56 PM 1 comment:

"The Weary Time Between Dinner and Dark"

Hi all (three of you).  Sorry for the inactivity here.  The dust lies deep and crisp and even.  But I am back! And with a little bit of thrillingly well-composed English prose for you.  (Not mine, as if!).

I have posted a few of my favorite passages from classic books here, very occasionally, and I am back with one more today.  I have been re-reading The Mayor of Casterbridge by Thomas Hardy, which I have not read since high school.  Hardy became one of my enthusiasms way back then, and re-reading him now I find more (great insight into the human condition) and less (plot device overreaching) to admire about him.  He was a poet as well as a novelist and it shows.  I bookmarked many passages as read, but this one was so wonderful I felt it my duty to share.  Here he is describing the losers of Casterbridge, the distinctions between them and the distinctions between town bridges to which they repair in their bad moments:

The miserables who would pause on the remoter bridge were of a politer stamp.  They included bankrupts, hypochondriacs, persons who were what is called "out of a situation" from fault or lucklessness, the inefficient of the professional class--shabby-genteel men, who did not know how to get rid of the weary time between breakfast and dinner, and the yet more weary time between dinner and dark. The eye of this species were mostly directed over the parapet upon the running water below.  A man seen there looking thus fixedly into the river was pretty sure to be one whom the world did not treat kindly for some reason or other.  While one in straits on the townward bridge did not mind who saw him so, and kept his back to the parapet to survey the passers-by, one in straits on this never faced the road, never turned his head at coming footsteps, but, sensitive to his own condition, watched the current whenever a stranger approached, as if some strange fish interested him, though every finned thing had been poached out of the river years before.

I am not much of a joiner, but if there were a society for the defense of well-written novels, I would join.  I know they are still out there, but the huge successes of E.L. James and her ilk has me depressed.  Happily, I do find lots of gems are there to be discovered, often in books now in the public domain.  Since no one has a financial interest in promoting them anymore, it seems they go largely unnoticed and aren't read unless under compulsion of an English teacher.  The good news is that they are often FREE on Kindle or on the internet if you have an interest.

I am always looking for recommendations.  I prefer works of staggering genius.  Contemporary writers are welcome but no mediocrities please.  Best wishes for the week ahead...
Posted by Kim Velk at 7:02 PM 2 comments: