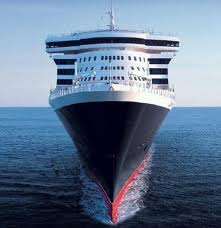 This year Shack is 10 and he gets to go on a "big trip" of his choosing. His sister went to England when she was ten - not having any choice in the matter since I sprang it on her on Christmas day that year. The deal was that since he had to wait three years for his trip, he got a choice - or at least a whiff of choice. He said for a while that he wanted to go to Russia and I said, "No. No place where I can't read the signs." He said "cruise" and I said. Ycch. I didn't say, (but I thought), cruises are floating hotels for the superannuated and the vulgar (if you are a friend or family member who enjoys cruising I don't mean you, I mean the other people, the tacky, boring ones who went along with you on the cruise you enjoyed so much.).

Well... then I got thinking. What about actually going somewhere on a ship(other than the casino or the buffet or some VD-ridden trinkets outpost)? What about making that "somewhere" England? This would not be "cruising" but "crossing": this would be making the storied journey across the most no-fun highest-class Ocean of them all: the Atlantic! - and to a place where I want to go (never mind about Shackleton).

I was smitten with the idea immediately and Shack thought it sounded good too. Where's my steamer trunk! My fur coat? My cloche hat?

Which means, of course,that crossing the Atlantic on a boat isn't forced on everyone, which kind of wrecked it.

Now it has to be chosen. And, I have learned, those making that choice have two options.

The only one that doesn't involve sharing deck space with shipping containers and dodgy third-world merchant seaman is the Queen Mary 2. We don't need the Queen Mary or anything, but it turns out that after one eliminates the freighters, she's all that's left.

Oh darn. I thought. Well, we'll just have to sign up for a little over-indulgence at sea. It can't be helped. In other circumstances the freighter would be the better option, but not for Shack's big trip. Once in a lifetime and all of that.

So I sent for the brochure.

If you haven't investigated the Cunard line lately you might be interested to know that they have apparently hired Hyacinth Bucket to write their copy and design their entertainments. Another change is that they have done away with steerage (drat), second class and first class - well, at least they have re branded them. Now on offer are "Britannia Club." (Read - low-rent district, at least as low rent as you can get at $250 a night) the "Princess Grill" (f/k/a second class) and "Queens Grill."

"Amenities" for the Britannia Class passengers are set out in a short list in the brochure and include (I am not making this up)"bottle of mineral water". Amenities for Princess Grill Passengers are in a much longer list and include "Fruit basket with Orchid." ("Excuse me, steward, someone has neglected to place the orchid in my fruit basket. What am I paying for in this Grill?") The Queens Grill passengers get "Butler service", "flower arrangement, fruit basket and bottled water replenished daily," "complimentary in-room bar" and on and on. 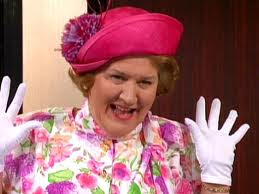 Shack and I watched the DVD that came with the brochure and did not see a single child anywhere - not in one picture, not in one frame. Lots of silver-haired attractive people in evening gowns and tuxedos having a laugh with glasses in their hands etc., but no kids, (also no oldies and no fatties which made it pretty obvious that the pictures in the brochure are all of models).

Soooo. We are getting the message that our kind aren't really wanted on the QM 2. Which, I have decided after just this little bit of reflection, is pretty much OK by me. Even if we had the cash handy for the fruit-basket-with-orchid splendors of the Princess Grill, I have a sinking feeling we wouldn't much enjoy it all. After we had a nice long gawp at the boat, I would be making fun of the minor Saudi princes, D-listers, guys who made a killing with Toyota franchises, and anybody else who could be enticed by the thought of the "Captain's Black and White Ball" or a sing-along in the Grand Lobby, "complete with lyrics."

One detail. I haven't really talked with Shack about this, after I got him all whipped up everything. I'll let you know what he says.
Posted by Kim Velk at 8:16 PM 8 comments: