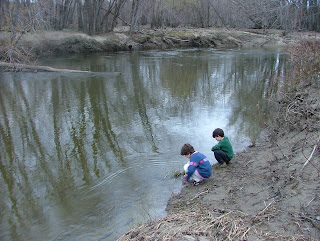 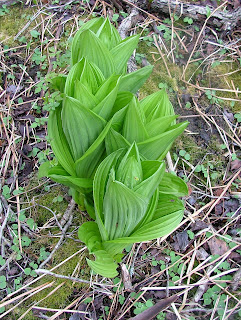 The Skunk Cabbage Has Made a Good Beginning 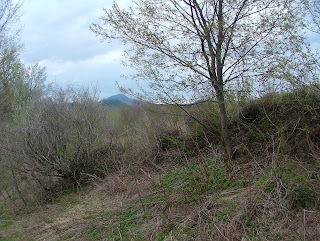 The View into Quebec From the Path Down to the River 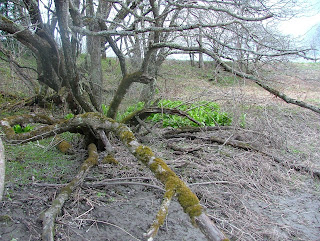 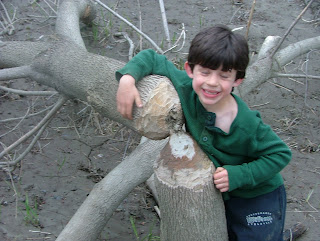 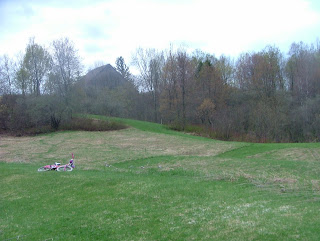 The Old Barn at the Last House from the Lower Field

We (Woolfoot husband and I) used to walk down to the river at the back of our property all the time. It got harder once the kids arrived because getting to the river -- the Missisquoi, which snakes across northern Vermont to empty into Lake Champlain -- one must wade through a lot of brambles and, depending on the season, mud. We had a $60 LLBean baby carrier, but what a hassle. (It was practically like new when I offloaded it on Ebay a few years back). So post-dinner walks to the river have grown less frequent in recent years.

Well, May 5 is still early spring in Northern Vermont but things have dried up sufficiently to make walking down to the river's edge a not-bad idea. Also Kid 2 is now 7 years old and he and Kid 1 think riding down the hill in the hay field to the river is a lot of fun. So, after dinner tonight the kids dragged me down there to see the "secret hiding spot" they found earlier today while planting willow trees with WHusband.

The river is running high and the recent flooding cleared some brambly areas, temporarily, allowing me to get these artsy photos for you all. Since we were there around dusk, we were lucky enough to see a monster beaver come by - looked like a 40-pounder to me. He slapped his tail at us several times but failed to scare us off. Here he is:

Sunday Reading and Writing; Thinking of Blenheim and W. Churchill

Other than our little nature walk, it's been a housekeeping kind of a day. I did take the kids swimming in Derby this PM but otherwise we stayed close to home. I managed to do some blogging and some reading and I wanted to blog a little about today's reading. First, some scene setting.

Our friend Aidan from Oxford, having learned of my interest in visiting Blenheim Palace on our recent trip over The Pond, drove us out there himself and accompanied us on the tour. Aidan is himself some kind of gentry but he doesn't really elaborate (I know he went to Winchester then Cambridge and is a famous pediatrician). He did mention while we were touring Blenheim that, as a young man, he used to do shooting at some estate next door owned by a relative. Anyway, even if he hadn't been to the manor born he has the meritocratic claim to honor. (His charming house, where we stayed, is a Victorian row house, a stone's throw from Christchurch College. It has one bathroom, no tumble dry and no central heating; it does have a lot of books and bric a brac from the lives of his grown children - true good taste). Aidan bought a copy of the biography of Winston Churchill by Roy Jenkins at the Blenheim gift shop for me to bring home to WHusband. I got to reading it today. The connection, of course, is that Churchill was born in Blenheim as his father, Lord Randolph, was the son and brother to two of the Dukes of Marlborough.

Both Aidan and I started chuckling at the end of the tour when the current Duke of Marlborough appears in a video to thank you for visiting his home. Remember upper-class twits from Monty Python? One of the docents had mentioned to us during the tour, in quiet, nearly conspiratorial tones, that the current Duke - an 80-something gentleman who lives in the part of the Palace one does not get to visit on the strength of one's 20-pound ticket - comes from an age of grand deference that is not now well understood. Rather a man out of time. I tip my hat to him for not trying to keep Jenkin's book out of the gift shop, however. In his first chapter, Jenkins notes that after the first Duke, a Churchill who won the battle of Blenheim and a bunch of others a couple of hundred years ago, the rest of the lot have basically been losers.

I am a Churchill admirer, not one of those contrarians who blames him for bankrupting England during the War. Having read this little bit of Jenkins book, I like him even better. Discussing some early financial pressures on Winnie, Jenkins writes:

Out of these pressures Churchill evolved two firm rules which he followed faithfully for the rest of his life. The first was expenditure should be determined by need (generously interpreted) rather than by resources. He stood the famous maxim of Dickens' Mr. Micawber on its head. Second, he decided that when the gap between income and expenditure became uncomfortably wide the spirited solution was must always be to increase income than reduce expenditures.

Now, that is the right attitude. God bless the memory of Winston Churchill.
Posted by Kim Velk at 8:13 PM 3 comments:

I Been Workin' on my Bla -ah-og, all the Live-Long Day: Scroll for a Poll

My husband said yesterday I was going to take root in this chair. What can I say, Rome was not built in a day and I have been learning my way around a few more Bloggish features. I added a poll yesterday, just for fun, - but you have to scroll right down to the end of this page, check it out.

And I didn't really spend all day on the computer - just all evening! Really.

Most of the day yesterday was, in fact, spent ferrying Kid 1 to a birthday party in Movegas (aka Morrisville, Vermont) and then playing VT tourist with Kid 2. He and I went down to Montpelier, our bijou little state capital city, for a quick look at the State House and all the hippies and their various products at the weekly farmers market. Then on to Ben and Jerry's factory-cum-tourist-attraction in Waterbury for a cone. Then home. No wonder I had to sit and blog when I got back (that jaunt representd about 5 hours of driving/shopping/gawking)! We at the Last House did also manage a little effort for Green Up Day, running around the fields here and picking up cans and plastic, what have you. I was impressed by all the volunteers I saw out on the roadsides in yesterday's cold, rainy weather.
Posted by Kim Velk at 7:12 AM No comments: