I wrote a few months ago about the handful of personal encounters I have had with famous people. I realized shortly thereafter that I had left one out! I made a mental note to come back and correct the record, so here we are. The kind of embarrassing thing is that I am not exactly sure who the famous person was. How can that be, you ask?

He was (is) part of the band Phish. I did not know a lot about Phish then, or now. I know it wasn't Trey Anastasio. His name and look are sort of hard to forget. The other guys are very regular looking in my estimation. (I do have their new album, Joy, on iTunes BTW, but its my first foray into their music). I have looked at a few pictures of the guys and I think it might have been Page McConnell. Sorry, Phish fans. Anyway, here's how it went.

It was the late '90s and I was working in a small Burlington, Vermont law firm. Late in the afternoon one day I heard from one of the partners that someone from Phish was coming into to talk with the firm's real estate expert. I am pretty sure that I was told that it was Trey, but I am sure that it wasn't, as noted. I kept my eyes on the parking lot for an expensive car.

Eventually, after stalking around the ground floor near the entrance, I saw that the Phish Man had arrived. No fancy car. He had walked up the hill from downtown in his sandals. I came down from my office for what I intended to be a bit of low key gawking. When I got to the waiting room He was waiting, just like a regular person! He was perusing a copy of Life magazine, which, as I recall, had been recently reconstituted around that time.

The cover story was about a pair of Siamese, ooops, I mean "conjoined" twins who had not been subject previously to public exposure. They were girls of about 10 at the time and Life had given them a camera of their own to document their lives. The resulting pictures weren't that great, but they were still pretty startling. The remarkable thing about them was that they were joined from the neck down, giving them the appearance of a creature with two heads.

I always thought of those girls in the years to come when I saw this creature on a TV show my kids favored as preschoolers: 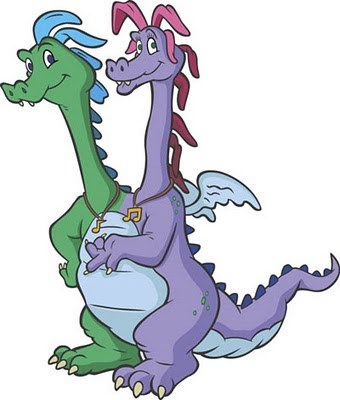 The twins were basically like this, except that they were human and white and not a cartoon. (I used to wonder what they and their family thought of this particular character, and if they ever felt riled by this and other depictions of the two-headed as dim, but that's another blog post....)

Anyway, the Phish Man was smiley and friendly to the little crowd of us who had come to look at him in our waiting room. Together, we all looked at the magazine. We agreed that the twins were an amazing sight. He said, "God, it's hard enough to share an apartment with someone!" We all laughed. We all liked him, whoever he was. We wished that Phish did not have a phalanx of New York City lawyers to do all their big work.

OK. That's all I got. Well, one time I did have to leave a message for Lynda Barry, but that sounds a little desparate, doesn't it?

Hoping to hear more celebrity stories from any commenter willing to share.
Posted by Kim Velk at 10:11 PM 6 comments: