How I Learned to Stop Watching American Idol 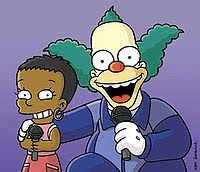 (Put on your culture critic hat and matching scarf! We're off!)

So, for the first time ever this year, the kids and I have been watching American Idol. We stumbled in by accident back when the judges were traveling around the country auditioning wannabe Idols, which was interesting in a voyeuristic way. (There is nothing like open-call for the nation's top TV show to bring out not only a trace amount of talent, but a sea of naive dreamers, the delusional, and the bizarre). We came briefly under its spell. But that's over. Shack and I have reached our limit. Only the Understudy (who is 12 and an occupant of the ideal demographic and mental age for the show) still has any interest in the results. Shack is bored. I, predictably, am appalled.

As everyone knows by now, and in "everyone" I am including inhabitants of remote desert islands and space aliens, American Idol is a talent contest. The talent in question is, ostensibly, singing.

As I write, the 2010 contestants have been whittled from the 50, who were plucked from the hordes to go to Hollywood, to seven. In the end, one will win.

As everyone also knows, although the judges remain on the stage to critique every performance, once the 50 were dropped to 12, the decisions about who stays and who goes, have been made (so we are told) by the voters. The voters = anyone with a cell phone and an opinion who is willing to pay regular texting rates.

Ryan Seacrest (whose name I have been hearing around for years without having any idea who he was), is the host/ringmaster. He looks like a friendly Apollo-era NASA engineer in a close-fitting suit, short hair and thin tie. He holds hands with the contestants after they get the judges reviews, he interviews the contestants briefly before their numbers (seated cosily with them on cube-like couches with Coke ads swimming in background). He plays middleman between the judges and the contestants. He urges America at the end of the show (lines stay open for two hours) not to let their favorites go.

The talent under scrutiny, as noted, is singing. Of course, it is now and has been since America started doing the judging, a popularity contest.

This is the show's true self and what a big part of what makes it, at bottom, ghastly. There are other horrors in its DNA but the popularity aspect is what really puts it into the category of soul destroying.

What is that will make a young singer (28 is the cut-off age) popular with that unspeakably vast middle/mob audience?

Despite judge Simon Cowell's repeated admonitions to the contestants that to win they must find and express who they are, "as an ahtist," being an "ahtist" will not save them here. (As he very well knows). In fact, real "ahtists" need not apply. This is a competition for the Liberaces of pop music - not the Glenn Goulds.

Mostly, as Simon and the other judges also know, the real artists wouldn't apply in the first place. Anyone with sufficient integrity to be merit the label would not assume the posture necessary for winning.

The one contestant this season with a trace of rough edge, and potential disdain for this kind of thing, a former busker called Crystal Bowersox, has been sanded down before our eyes. The lip piercing is still there, but the dreadlocks have been deemphasized. The jeans and T-shirt have given way to high heels and black dresses. Early on, before the stakes got so high, Crystal revealed she auditioned partly as a goof and because she needed money for her kid. She had a real light in contrast to the glossy lips and vaselined teeth that surrounded her. But she has been changed. When Simon pointed out after one of her recent performances that she didn't have "the competition in the bag," she started wolfing down the humble pie. "I never thought I had it in the bag. This is a competition, anyone could win. I never thought of myself as a favorite. Last thing on my mind." Translation: "Love me America. Please."

Equally fatal, however, is too obvious sucking up. Another contestant, a particularly cloying high school girl from Connecticut, actually said in a recent post-performance interview with Ryan that she was "begging" for America's votes. Big mistake. I see she was voted off last week. Truckling is required, but America doesn't want you to say that you're truckling.

It's a fine line these poor sods have to walk. Walking it deftly is what will determine who wins.

Of course all this has put me in mind of The Simpson's episode, "A Star is Torn". (Is there a moment in American public life without a better, funnier Simpsons corollary now?). There, Lisa competes on "L'il Starmaker." ("Not affiliated with American Idol," says host Krusty the Klown. "We've never even heard of American Idol"). Lisa makes it to the final two and wins with her sweeter-than-an-Easter-basket song, "My Dad." Her competition, a twinkling little boy called Cameron, has been sabotaged by Homer who chooses a song for him called "Privileged Boy".

The other thing that makes American Idol a kind of horror show is its focus on the slow and lingering death. I have heard professional performers talk about how brutal regular, real-life auditions are. Hopefuls appear, get their few minutes, and the judges say, "OK, you, you, you and you. Come back tomorrow at noon. The rest of you, thank you for coming, don't let the stage door hit you on the way out."

Not kind, but business-like at least, and quick.

The point of American Idol, a marketing juggernaut from which every available dollar is clearly being eked, is to prolong the agony. The slow lopping of one, then another, from the show whips elements of the audience into camps. Shots of the audience, which makes the audience at the Price is Right look sophisticated by contrast, routinely show sign wavers and T-shirt wearers who have become tribal affiliates of one or the other contestants. (William Golding was, it appears, right about humanity).

At this point in the competition the contestants sing on one night, the votes are tallied, then an hour-long elimination show follows on the next night. Needless to say, the survivors are all placed on tenter hooks for the duration. Ryan brings them forward by twos and threes. "Do you think it's you? Here's what the judges said last night. One of you will not be going on. Here's what America said... Blah blah."

It's like watching a car crash. I really can't stand it anymore. I worry that those space aliens looking on at American Idol might decide we aren't worth observing anymore and dust off their planet destroying death rays. Let's hope they instead think to tune into Discovery Channel, or PBS or Showtime and watch coral reefs or snow leopards or Edie Falco or something else that redeems life on earth - or at least all of us who have played along with AI.

I can report that we never texted in a vote. I might keep watching, though, here and there, just to see if Crystal works up the guts to tell the producers that they can stick their contract where the sun doesn't shine.

Oh, and I must add that today's banner comes courtesy of the Understudy who has been exploring the paintbrush on her new Mac. Thanks dear.
Posted by Kim Velk at 5:48 AM 7 comments: