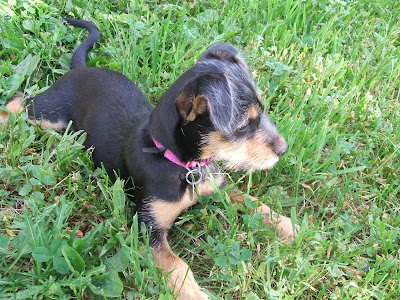 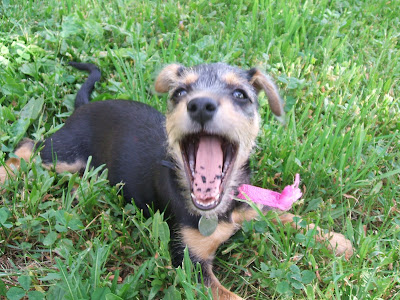 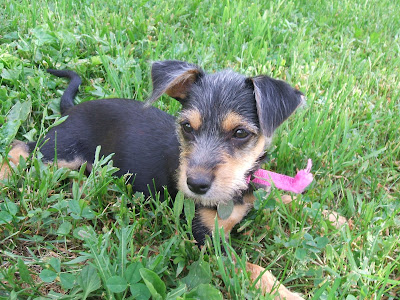 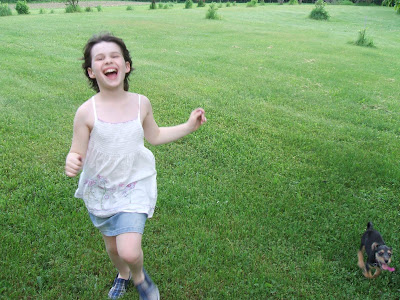 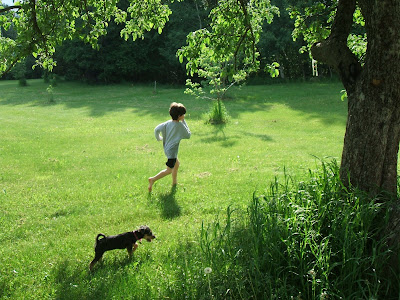 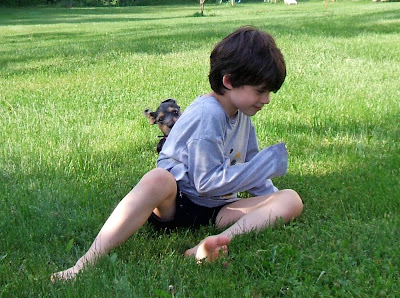 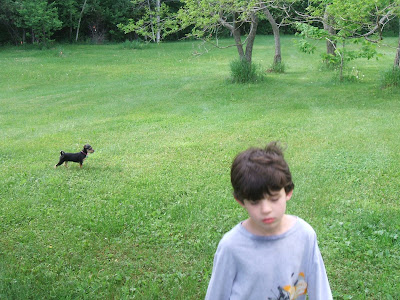 Here's our Maisy disporting herself with her people. The black bits on her tongue are some ashes from a burned up Wall Street Journal. She still has a lot to learn but she has adjusted wonderfully well so far. We are now beginning Week 2 as her people. Dog ownership seemed a lot harder when I was kid. We had a dog like Santa's Little Helper on The Simpsons. (I.e., stupid and hyper). He kept escaping our suburban subdivision home to chase cars on the highway. When he bit neighbor kids, a brother and a sister in one family, he had to go. (Luckily he was adopted by an animal lover friend of my mother's and lived out his days on a farm). Having had to care for some human infants in the interim has made this puppy thing a breeze. OK, maybe the puppy's personality has something to do with that too.

Rescued from Obscurity Part II
Maud and Miska Petersham and My Travelship.

A couple of posts back, in a curatorial mood, I blogged about the nearly forgotten Joy Street Annuals (q.v.) These make up a big part of my smallish collection of pre-war (World War II, that is) children's books. While I had them down from the shelf I couldn't resist pulling down this volume:

Isn't that cover gorgeous? The illustrations are by Maud and Miska Petersham. A husband and wife team who have not really faded into obscurity - but they aren't exactly household names either. The illustrations are so bright and beautiful, it hardly matters that they accompany English-language versions of (now) nearly unreadable Dutch fables, stories and poems. Perhaps they were inspired by all those brilliant old Dutch Masters.

Tales Told in Holland is one of three books in the "My Travelship" collection. The set was published in Chicago by the Book House for Children beginning in the Mid 1920s. It was reprinted many times at least into the 1950s and maybe beyond.


The Petersham's also illustrated another volume in the set, Nursery Friends from France. It's also beautiful. The third volume is Little Pictures of Japan. That one is very elegant and illustrated by Katherine Sturges. The set was edited by someone called Olive Beaupre Miller. I believe that when they were first sold they were boxed with six other Book House volumes in a wooden box shaped like a house (someone is trying to sell such a set online for about $2,000). I bought these three in first editions, as cheaply as possible. The French one came smelling like it had spent generations on the desk of a smoker and the Japanese one had some ripped pages. Still they are all beautifully illustrated and an interesting effort to introduce American children to the stories and songs of children beyond the sea. The Petershams were extremely prolific and if you have any interest in children's book illustration you might want to have a look at their work. Your efforts in that direction will certainly be repaid.