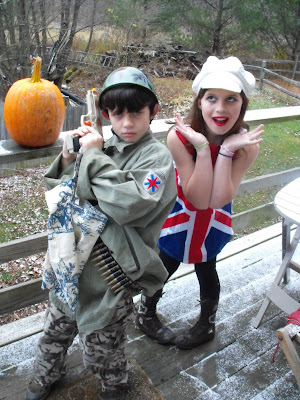 Note that the stone-cold killer has a toile bag for trick or treat.

Does't it seem like it should have a name? As Boxing Day is to Christmas? Tooth Enamel Memorial Day? Too long. Not catchy. Never mind.

Halloween morning dawned snowy and cold on the Vermont-Quebec border. (I took today's banner shot at the Last House mid-morning yesterday). This snow had some legs, too. It was still there when we headed off for Stowe after lunch and is probably still up there because it was cold here today. Like, ice-box cold.

Shackleton (army man) complained all the way through trick or treat that he couldn't feel his hands. For the first time in all my Halloween history we had a sit down part way through so he could have a hot chocolate at Stowe's uber atmospheric Black Cap coffee shop (couches, paintings, enormous milk steaming apparatus etc.)

I hope that your Halloween was fun. Kids agreed that upscale Stowe was less fun and had worse candy than the impoverished border town where the Last House sits and waits.

I have to admit my main impetus for dropping by the old blog tonight was to share the good news that Adele, of "19" the Grammy Winner and one of my great favorites, has FINALLY announced that her new album will be available in February. It will be called, you guessed it, "21". It's been, what, 2 years since 19? Oh dear. But she worked on this one with Rik Rubin (a hip hop producer supposedly of genius who also did great things for Johnny Cash very late in the Cash career so there you go). Also, there is a lovely new picture of Adele on her fetching newly designed website, in case you're also interested. I guess that means I will have to leave the house for a concert next year sometime.

Off to see if San Fran has taken down the Rangers. You know I have issues with Texas...
Posted by Kim Velk at 9:20 PM 2 comments: