Harrods and the Heart's Desire 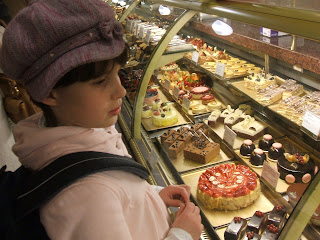 In the Food Halls 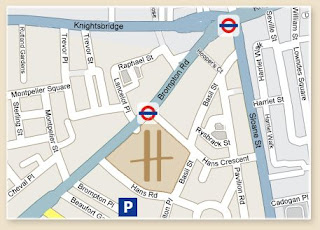 Let me start by saying that if it didn't come from an auction and it is in my house, it probably came from the Dollar Store or Big Lots or Christmas Tree Shoppe (another liquidator of consumer goods, nothing to do with Christmas trees). My horrible clothes are mostly bought at another super deep discounter in that international fashion capital, Johnson, Vermont called The Forget Me Not Shop. In days of yore, in the distant 1980s and 90s, I bought things with belts, things that had to be ironed, things with shapes, things that might be brought to a person in a dressing room in various sizes and colors by an assistant. And, are you sitting down? I once paid retail.

Those days are gone, long gone. And in this, my current, great horking, tatty American form, with a habit of cheapness so deeply embedded that it is as natural to me, and as reflexive, as blinking, I visited Harrods on three occasions during our four-days in London last week. Mind you, during this (maybe) once-in-a-lifetime trip, we (my ten-year-old daughter and I) didn't manage to get to the Tower of London or the British Museum or Hampton Court Palace. No Elgin Marbles for us, but we did see the shrine to Dodi al Fayed and Princess Diana at the foot of the Egyptian Elevator on several occasions. Oh, and we both loved it.

Anyone reading this blog probably already knows that Harrods is the most famous of the many great London department stores and a British Insitution now owned by Egyptian Billionaire Mohamed al Fayed (also famous as father of the late Dodi Fayed). The place was almost certainly more tasteful before M. Fayed got his hands on it, but this was my first time seeing it so I don't know any better and wouldn't really have cared anyway. I was beguiled - bad taste be damned. The Disney effects are, of course, only part of the story. The sheer marvelousness of the place, of its situation on Brompton Road- great crossroads of the world! Its immensity, its profligacy (more on that in a moment), and its real beauty (the jewelry, the antiques, even the "luxury toilets" [yes, they actually have signs, and not a few, to let you know where the luxury toilets may be found] were just so, what?, so enchanting.

We did spend a few dollars, although we didn't buy any clothes (I was beguiled but I am not crazy). Kid 1 insisted on shopping the children's section despite my oft-repeated warnings that we would not buy anything there. I shared a wonderful moment of recognition of the absurdity of the prices with an English grandmother who flipped over a tag on the same rack I was perusing. We looked at each other and laughed at the idea of a 50 pound child's blouse. We did buy the ice cream, and the cookies in a Harrods tin to bring home; we changed money in the basement (probably a very bad deal but the "bank" was beautiful and the uniformed cashier was charming).

For our hundred dollars or so we got a few odd bits that say "Harrods" on them,a few sugary drinks and snacks, and a bunch of images that will last a lifetime. It was worth it. There was an opera singer in the well of the Egyptian Escalator who sounded good enough for La Scala last Saturday. I thought it was a recording till I heard the applause. The one sight that most impressed me were the legions of dark-suited young people who staff the miles of floors outside the food halls. (Inside the food halls everyone is dressed in what amounts to a costume that reminded me of Dick van Dyke on his day out with Mary Poppins in "It's a Jolly Holiday.")

The dark-suited ones seemed never to be talking to any customers or completing transactions. They seem to stand and watch -- although they can, and do, point the way to the luxury toilets, as they demonstrated for me. ("They also serve who only stand and wait?") To have this young, well-dressed, well-coiffed phalanx available at every turning was the most luxurious thing about the place. When I say that Harrods is profligate, this is my prime example.

On our last night in London our lovely (rich) friends took us to dinner at the sushi bar on the 5th floor at Harvey Nichols ("Harvey Nicks," as our host said). What I know about Harvey Nichols I learned from watching Absolutely Fabulous. It was great, of course, very cool, very smart, very expensive - just the place for Joanna Lumley's character on Ab Fab. But I preferred to be dazzled and to have fun, a declasse colonial in the end, I suppose. I guess we must get to Selfridges if we ever get back to London, and to the Elgin Marbles eventually.
Posted by Kim Velk at 8:43 PM No comments: