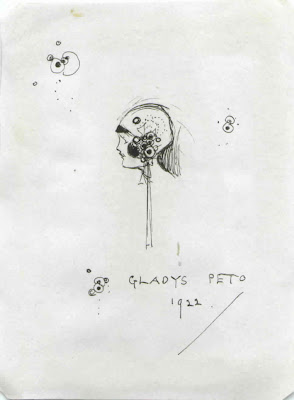 I have written here before about Gladys Peto, an artist whose work I stumbled over 10 years ago. Peto was a commercial artist and illustrator during the English jazz age. I became of fan as soon as I saw that first drawing in a Quebec antique shop and since then have done my bit to rescue her from the near-complete obscurity into which she had fallen. I briefly hosting a website (back then one had to pay and it became a problem) and then writing a Wikipedia article about her some years back. (See the sidebar for a few of my favorite Peto images).

My interest in GP has brought me good things. In addition to a little collection of pictures and postcards and books (that I still love, though I have stopped collecting), I connected with the inimitable at Juliet Doyle at Musings from a Muddy Isle when she wrote a few Peto posts. Later Jeanette Payne introduced herself, via the internet. Jeanette has occupied the Peto Fandom Field with her fabulous and scholarly collection of Peto-ana which she shares on her website.

I periodically dip into my Peto collection and a few days ago I took down from the shelf, for my bedtime reading, a travel book she wrote in 1928 called The Egypt of the Sojourner. Peto’s husband, Cuthbert Lindsay Emmerson, was in the Royal Army Medical Corps and they were posted to Malta and Cyprus and later to Egypt. (A descendant of C. Lindsay found me via the internet and kindly sent me a copy of the Emmerson-Peto marriage license – as I say, good things have followed my interest). Peto wrote travel books intended to inform the long-term visitor to Malta and Cyprus and Egypt. They were published in the 1920s by J.M. Dent. 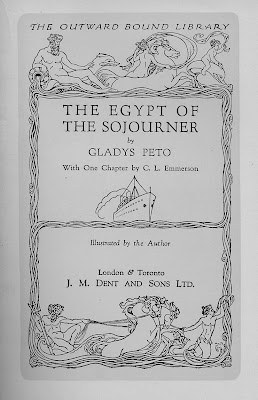 Of course, the world of the wives of Army Officers in the days of Empire is one that is well and thoroughly lost and only a horrible Colonel Blimp could these days regret it. But it makes fascinating reading – it’s like walking into a Merchant and Ivory production but without the make-believe and alongside a guide who was – is – there.

Her style in this little travel book is light and very immediate. Her witty reproductions of ship-board conversations, or the idle chatter of neighbor officers wives over their sewing, bring it to life. Horrible oppressive imperialism aside for a moment, Empire had its winners and its romance, and both are, however unintentionally, on display here.

The other thing that struck me, as I opened the book again today while drying off from my bath, was how much I am sure I would have liked GP if I had known her back 80 years ago.

See what you think. Here’s a little exceprt from the chapter titled, “Cairo, The Daily Round”:

You can also have, at Gezira, the ideal and perfect lunch for a summer day, or for a winter day pretending to be summer, for you can order sandwiches and beer to be brought to you under the trees – also large wicker chairs. The sandwiches are very worthy of remark, for they are very fine large sandwiches, and the bread is always new, and inside them is foie gras and other pleasant fillings… and if you ask only your really intimate friends to join you, you can all read magazines and need not talk at all, and really what can be more pleasant than that… Only you must go early to the magazine room to steal your magazines, or there will be nothing left but Honey the Beekeepers Guide, and American paper about a new religion and then you get drowsier and drowsier, and enjoy a happy little dream or two before you go away to the races, or to the tennis courts, or to the golf course….

And then back again to drink tea… and meet all your friends and recognise your acquaintances, and marvel forever about the two or three groups who happen to be unknown to you. At the end of a few months you will know practically everyone of the British community by sight at least, so you will naturally greatly resent the arrival of anyone whose history and business you do not know. 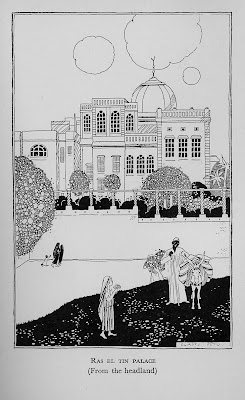 Well? I must say that GP’s idea of a good time and mine accord. (Magazines and sandwiches in the shade with your best friends? Sounds like heaven to me. I think I could get used to servants fetching chairs). Her self-effacing manner and obvious intelligence also commend her to me.

The Hon. Lady Fisher wrote an obituary for Peto when she died in 1977. It was , something less, actually, than a full blown obitutary - I forget what theTimes (London) calls it. But postwar Britain had not been friendly to Peto’s style or sensibilities and the obit. makes clear that Lady Fisher was reminding those of “the older generation” of the then-forgetten artist whose books for children, drawings, designs for pottery, dresses, and theatre scenery were such a feature of English life in the 1930s. Lady Fisher wrote:

A truly successful artist in her prime, she was admired and loved by all who knew her, not least for the humorous charm of manner which enhanced her life style, as it did, indeed, her work […]

I don’t doubt the truth of that or that was written by Lady Fisher for The Times through tears.
Posted by Kim Velk at 2:46 PM 7 comments: