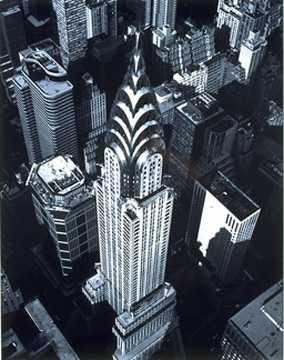 Me and some of my kinfolk are leaving these hills for a few days and heading down to NYC.

I am little worried that they won't let me onto Manhattan island. Do they still have those style police posted on the bridges and in the tunnels? I was really concerned about that kind of thing during high school and college years growing up as I did in darkest Schenectady. I remember a kid from Long Island paying me the ultimate compliment when I was 20. He found out that I was from upstate: "Really?" he said. "I thought you were from the City." Well, I was trying harder in those years.

Thankfully, it is too cold for the turnip truck so we have bought train tickets. I'll let you know how it goes.
Posted by Kim Velk at 7:37 PM 5 comments:

Finish This Sentence: What the World Needs Now Is ... 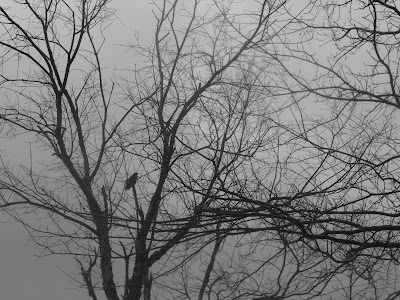 My usual answer, probably like yours, would be "bleach". Times being what they are, however, I guess I'll change that to "money". 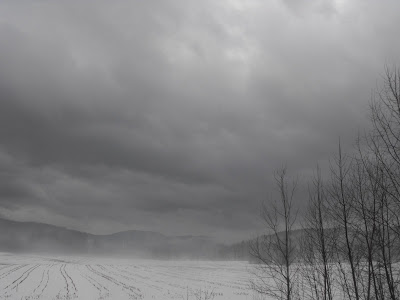 Driving around Stowe the other day in a fog, with the snow tired and dirty, even dangerous, and all the news bad, I hopped out of the van to take these pictures. Not exactly subtle, I know, but something of the zeitgeist presented itself: the normally benign fields and mountains of Vermont transformed into an Orc-blasted landscape. (These are actually color shots...) 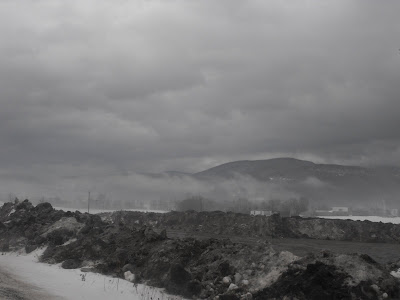 It's Sunday, however, just barely, as I am doing some insomniac blogging in the small hours after some time away. I have the headphones on and am listening to Paul Hillier & the Theater of Voices singing Arvo Part's "Summa". I have just heard it three times through. It suffices to remind a person of, well, many things beyond the cares of the day, or even the cares of the times.

I could not find Paul Hillier & Co. on Youtube - I paid my .99 for it at iTunes and it was, of course, well worth it. Here's a string version for your contemplation.

Email ThisBlogThis!Share to TwitterShare to FacebookShare to Pinterest
Labels: Stowe Vermont, the Times 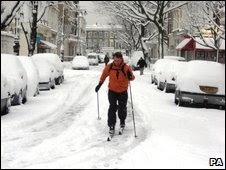 Has the snow in England melted yet? I heard an amusing (and sort of amazing) radio report on Thursday morning about how the country had been paralyzed by six inches of snow. Boris Johnson, the mayor of London, was interviewed and was nearly breathless about how "extraordinary" it was. The report made it sound as if a moon-sized meteorite rather than a few inches of snow that had hit London.

You know I love you, all you lovely British people, but this will not do. What happened to "keep calm and carry on"?

Just now, hopping around my favorite blogs, I found this over at Unmitigated England (see the sidebar). If you've been looking for a great blog to read, with pictures just as good, do yourself a favor and click through.
Posted by Kim Velk at 8:52 PM 8 comments: 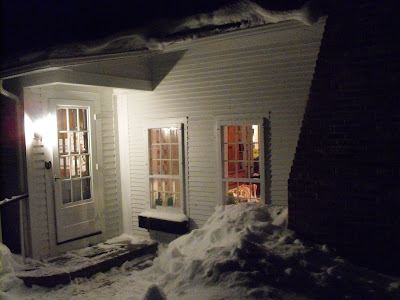 During the last few days I have finished Volume 1 of Evelyn Waugh's 1964 Autobiography, A Little Learning, a library sale purchase a few months ago). There is, unfortunately, no volume 2. It died with Waugh two years after Volume 1 was published. Fortunately, this book takes him up through the Oxford years and just beyond so it is full of interest. It's the first thing I have read in ages that I couldn't put down. A few lines that particularly caught my attention.

From the first page:

I longed for the loan of the Time Machine - a contraption with its saddle and quartz bars that was plainly a glorification of the bicycle. What a waste of that magical vehicle to take it prying into the future, as had the hero of the book! The future, dreariest of prospects! Were I in the saddle I should set the engine Slow Astern. To hover gently back through the centuries (not more than 30 of them) would be the most exquisite pleasure of which I can conceive. Even in my own brief life I feel the need of some such device as a failing memory alienates me daily further from my origins and experience.

I liked his description of his mother as well, particularly this:

She would have preferred to live in the country and from her I learned that towns are places of exile where the unfortunate are driven to congregate in order to earn their livings in an unhealthy and unnatural way.

I also listened to Cormac McCarthy's The Road on CD last week.
It might seem like the only two things these books have in common is that they are written in English (and that I recently consumed them). The other thing is that they were written by actual geniuses who write like angels - one a very dark angel, however. The Road is the story of a father and son travelling along an unnamed highway in a post-apocalyptic America, on their way to anywhere. It was actually agony to listen to this story for protracted periods. I persisted because I had been pulled in and, thank God, the absolute worst does not happen - well, at least in terms of the father and son. The depravity of the few other survivors in this ashen future is unbounded, and so heinous that it would have been unimaginable - if Cormac McCarty had not come along and imagined it and made a person realize, "Yes, that is how it would be."

I am not surprised the book won the Pulitzer Prize for fiction in 2006, or that it has been made into a movie. I am surprised Oprah picked it out for her book club (!) and that McCarthy was interviewed by Oprah on her show (!!!) How'd I miss that? It's like the Queen swinging by Patty's Snack Bar here in le Vermont Profond for a clam roll.

So, there you have it. Thumbs up from your hostess on both of those. 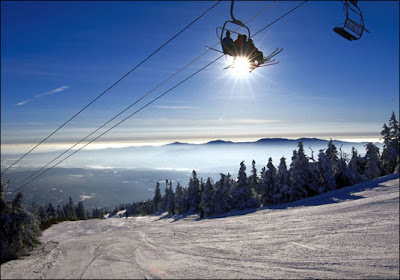 (This is not my picture. It's better than any picture I could take. I didn't have my camera along on this weekend's ski trip, and it was cloudy on Sunday while we were there. This is a picture of Stowe appearing on the Boston Globe website).

Waaay back in my early posts I talked a bit about how I learned to ski, sort of, at least, in my late 30s. I had never skied as a kid and only got started when it became apparent I would have to learn or the Understudy and Shackleton would have no one to ski with but instructors (As they were born in Vermont and live 9 miles from Jay Peak skiing was just a given). I couldn't afford all those lessons, so I bought skis and got going.

I was not destined to be a great skier or even a good one, but I progressed to the point where I could get down the hill without killing myself or anyone else - if it is not too terribly steep and not too crowded. For some reason that I can't now remember we did not ski last year. I think it was because the kids got ice skates and skating was cheaper and easier than skiing so we skipped a year. I think now that was a mistake.

God in his mercy has created many ski hills in Vermont and also executives at some of those mountains who let school kids come and ski with volunteer instructors at hugely reduced rates. Stowe, where I went for the first time this year, has such a program (thank you Stowe) and Shackleton and the Understudy were back there this weekend for another lesson. During their previous lessons this season I have enjoyed sitting in the Lodge drinking coffee, but this last Sunday, for the first time in two years I bought a half-day lift ticket ($65 - ouch!), put on my skis on and had a go.

I hate to be crass (although I can get over it) but I have decided that skiing actually is better than sex. I want to ski ALL THE TIME. Skiing is life. It is like flying. Even a terrible skier like me, who has to ski with three-year-olds and people who normally live near the Equator, can love skiing. I love skiing. I want MOOORE.

Also, I am completely smitten with Stowe. It is sort of stylish in Vermont for natives to talk trash about Stowe (a place fit only for New Yorkers and celebrities) but it is splendid and beautiful. If only it had cheaper tickets... 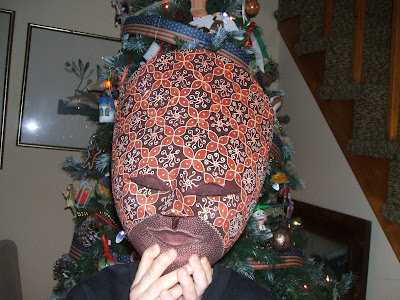 On the way to the mountain, we stopped at a local McDonald's for fuel. We have been there many times, but since our last visit they have changed the counter, adding a downmarket McStarbucks, oops, "McCafe". It wasn't operating yet, but it changed the look of the place. Shackleton was pondering the change and said,

"There's something different about this place, but I can't put my tongue on it."

This reminded me to share a few of his other gems that I have been meaning to post. Here ya go:

1. In the car, driving home in the dark with a crescent moon hanging in a cloudless sky:

"There's an old, old tale that I just made up."

3. Whusband trying to get Shackleton to try some new food:

As Jack Handy once said on Saturday Night Live: "The face of a child can say so much, especially the mouth part of the face."
Posted by Kim Velk at 8:09 PM 6 comments: