My son Shackleton, who is 12, is doing the school play.  Rehearsal tonight was from 6 to 7:30 PM.  I was napping from 5 to 6 PM with the result that he didn't get any dinner (not from me anyway, he could have served himself but that's not happening).

As for the money, he needs my Paypal account and he knows I will say "no" unless I get some quid pro quo: work or some other form of sacrifice.  He came down the stairs shortly after arrival with a literal fistful of dollars - nine dollar bills and four quarters, to be specific.

Normally I charge him a user-fee, just to be discouraging but I was distracted by catching up with posts by my brilliant friend Lulu who got busy blogging again this winter without my noticing til tonight.  I was trying to read Lulu's posts while he stood there leaking dollars. I said I would make the deal and let him take $10 if he straightened them out - they were a mess, like Oragami created by a perverse and hateful blind person.  He said OK.  Then I made him tricolor rotini (from a box) with meatballs (from the freezer, but beautifully thawed in the Ragu that I pulled out of the fridge).  Then I got back to Lulu.  (She's a gourmet so I guess I'm noticing my poor standards particularly).

Just a few posts into my reading, Shackleton was back at my desk with his (almost) empty rotini bowl.  "First," he said, "one of the dollars fell into the dog water.  I took it out and it's drying.  Second, can the dog lick my bowl?"  (She barfs sometimes).

I said yes to the bowl licking - Maisy tolerates a little red sauce quite well.  And if I will eat from a bowl from which the dog has eaten, can I really object to a dollar that has been fished out of her water? Now he's gone for the night and I have eight dollar bills folded into my wallet but it looks like a lot more.  I'll add the damp one tomorrow. 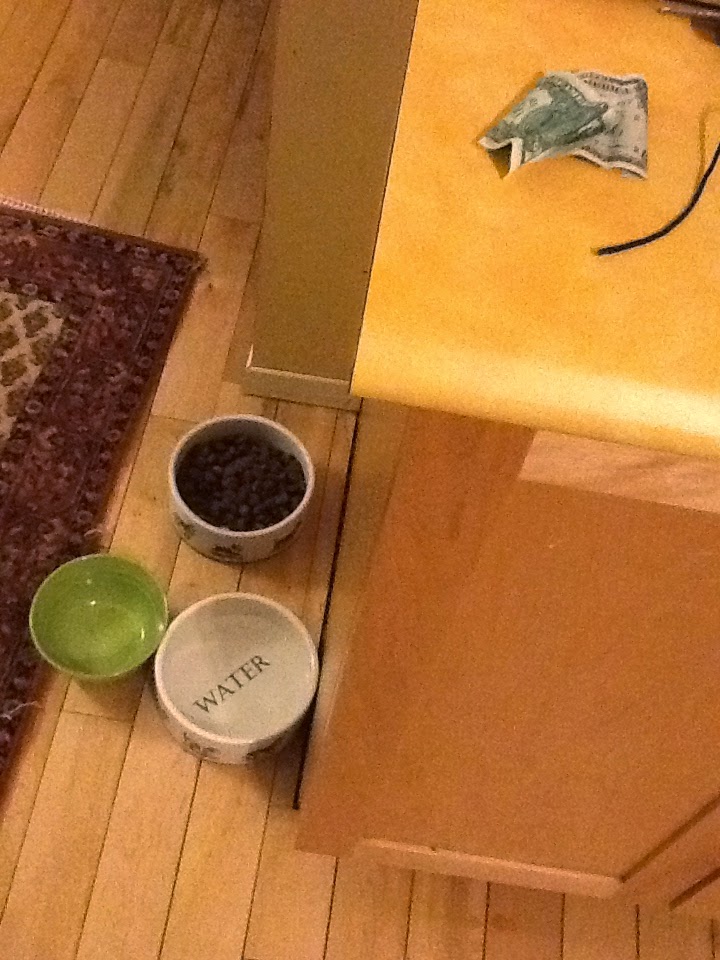