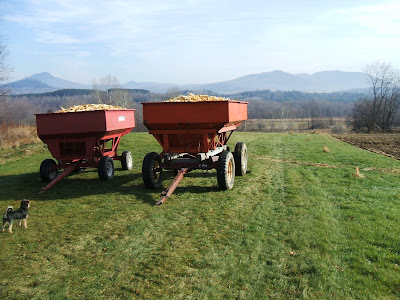 Today's banner is Maisy standing in a field behind the Last House. I took that picture just yesterday, when it was positively, freakishly, summer-like here on the border. Before her lies a wee smidgen of America. The country ends just a little beyond that blue bit of farm equipment you see down there. Thereafter, it is Canada. The corn from that field was harvested just this week.

We (Whusband and I) don't do any actual farming. Suburban Schenectady and the South Side of Milwaukee (where Whusband and I come from, respectively) were not good places to learn farming. My father grew up on a farm, however, and that farm was and is one of my favorite places of all time which is why I wanted one of my own when I grew up - although I certainly didn't want to work like a farmer. So, we rent our land here to Jack Lazor of Butterworks Farm.

Jack and his wife Ann (lovely, both) are world famous in the circle of Vermont organic farmers (this is adapted from WHusbdand's observation that many Canadians are World Famous in Canada). And while we can't claim any credit for Jack and Ann's work, we do enjoy our window seat on what they accomplish here each year. One year we had sunflowers in the field in front of the house and they were, briefly, beautiful. Of course they turned into ghoulish black late in life and that was less attractive. In any case, it is especially nice as Thanksgiving approaches to have followed along on a full growing season and to witness close up the actual harvest of food. The stubbly fields are rather reassuring this year, with mortgage backed securities and other strange, ghostly forms of wealth vanishing into the mists from which they seem to have come. Here, we are back to where it all began. Food coming up and out of the ground and going into a barn.

Jack came shortly after I snapped this picture of his wagons, hitched them to his pickup truck and them down to his farm, in nearby Westfield. It will go into his cows and reappear as his famous Organic yogurt. (Those if you in NYC can get it at Dean & Deluca. Martha Stewart once featured his Jersey Cream on her show. Like I said, world famous). He'll also sell some, I think, for a pretty premium since it is all organic.

At the risk of sounding like a 19th century windbag, I have to say that all this talk reminds me of a poem. Can't think which one... Oh yes. To Autumn by Keats - here are my favorite four lines.

Who hath not seen thee oft amid thy store?
Sometimes whoever seeks abroad may find
Thee sitting careless on a granary floor,
Thy hair soft-lifted by the winnowing wind;

Gawd, but those trophy photos in my last post are ugly. Sorry about that. Standards are slipping. I am mentally pledging to smarten up. See you at the health food store.
Posted by Kim Velk at 7:34 PM 5 comments: