Away An Bile Yer Heid!

Kids and I decided on the spur of the moment on Saturday afternoon to depart the Green Mountain State and descend on my Dad and Stepmom. They live in a new house on the outskirts of an old village near Albany, New York. The weather was great and, truth to tell, we had nothing on our Labor Day Weekend social calendar. Also, it is always a treat for us to visit them, with their multiple bathrooms, central air conditioning and profligate number of electrial outlets. Whusband had the lawn to cut. We were off.

As luck would have it, the Capital District Highland games were on, over in the Highlands of Altamont, New York - another small village near Albany.

Ma heid's birlin wi all these uncanny ties to Scotland!

These are simply cold facts: Robert Burns and I were both born on January 25, (albeit a couple of centuries apart). I have a great-grandmother on my mother's side named Ella Macomber. Maisy, our dog, was fostered by a breeder of Cairn Terriers. Maisy's middle name is, hand to heart, "McTavish". Kids and I frequently quote Groundskeeper Willie. If pressed, I could use "bonnie" in a sentence. How could I miss a chance to hang around with a lot of Americans looking for an excuse to wear their kilts in a straight, non-Goth sort of atmosphere. We could find Maisy's tartan! If there was anything there with Groundskeeper Willie's picture on it, I could buy it.

As an aside, and by another spooky coincidence, I had recently been researching the Scots' reaction to Groundskeeper Willie. Everytime he comes on The Simpsons, I wonder what the people in Scotland - not the Americans with Scottish last names but actual Scottish people -think of Willie. I was surprised to learn that GW is the best known Scot in America. Based on the on-line comments I read (the Times [London] ran a story lamenting the depth of American ignorance of Scotland and that attracted lots of commentary), the Scots seemed to take this in stride and with a good sense of humor. They seemed to like Willie themselves, (shut yer geggy, Times) as well they should. So, off our little mongrel clan of German-English-Dutch-Irish-Polish-Irish-etc. selves went for a proper Scots-American wallow.

This Clydesdale, and two sheep, stood in for the special animals of Scotland. The horse was sort of like the Highland Games version of the greeter at WalMart; the first thing you saw, blinking at passersby. Laconic, like a true Scot. Kid 2, who shall henceforth be known as "Shackleton", (more on that coming soon) can always be persuaded to stand near a horse and have his picture taken. Doesn't this just scream "Scotland?" 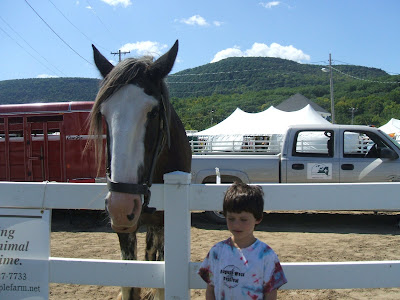 Of course, we had to beat our way through the crowds to the tent featuring odd Scots and English brands of foods. Is there a reason these items are not available on the shelves of your local Price Chopper? Like, they are unpleasant to the taste? Actually, HP sauce is consumed by one or two Canadians I have met. 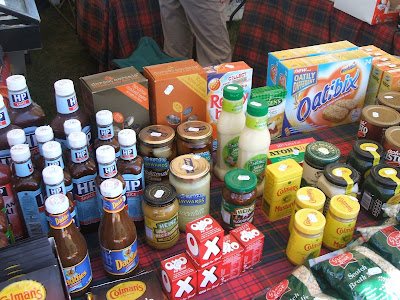 There was not as great clamor for oat-based products as you might have expected. Stepmom only modeled the oatcakes. We were saving our money for some other scaffy Scots swag (a key chain for Shackleton and Claddagh Ring for Kid 1 - henceforth, "the Understudy." Yeah, Claddagh rings are Irish, I know, but this is America and as the Times will tell you people here have trouble telling Scotland and Ireland apart). 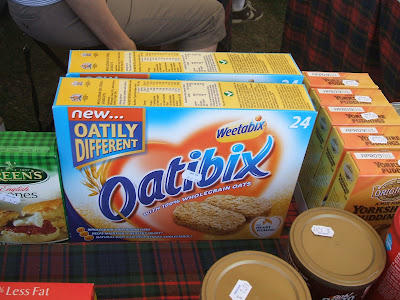 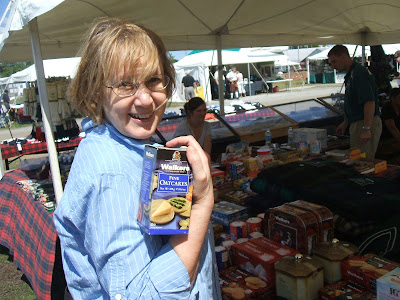 Toffee - doesn't it make you think of a hairy cow? 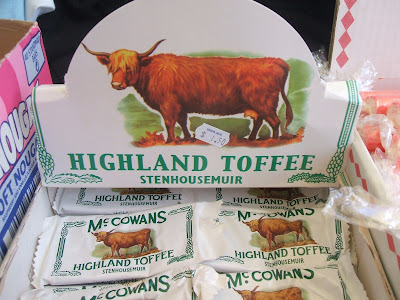 Plaid all over the place. The Crocodile Dundee figure here is mirrored by a kind of evil twin, the woman in the plaid shorts and tank top with bra strap. 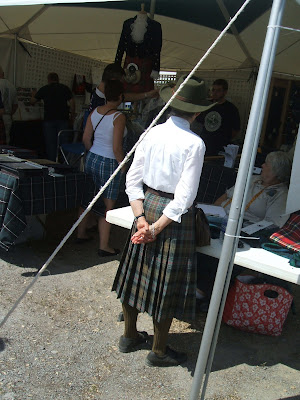 Look it's Maisy's middlename! Well, sort of. We spell it McTavish. 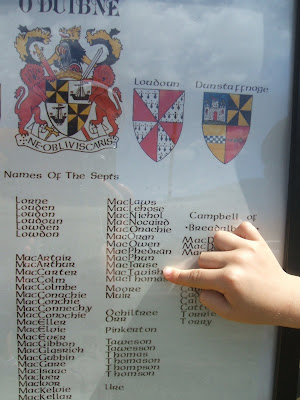 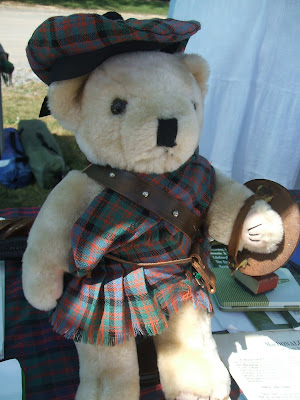 Close your eyes and it was like you were there. Note the traditional Scots Tevas. 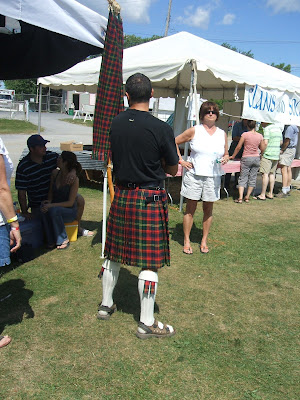 I must say I was impressed by the gentlemen manning the Scots Military History tent. It's amazing how manly they are in their skirts and hats with the pom poms. I really mean that too. 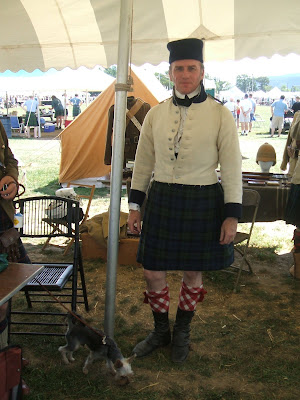 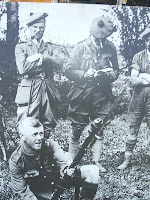 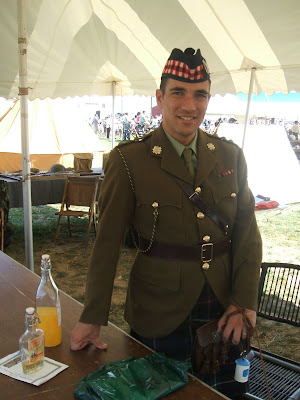 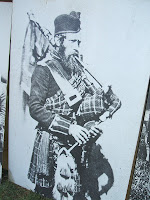 Perhaps security concerns prevented the crowds from coming within 50 feet of these wee lassies. 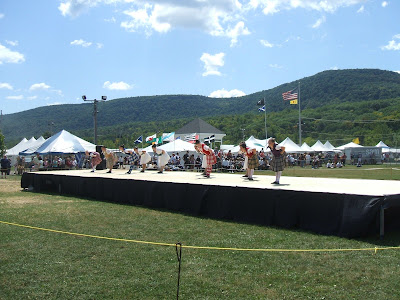 Shackleton wandered over to the pavilion of The British Shop. The proprietress was from that British outpost, Buffalo, New York. She looked daggers at me and poor little Shackleton as I pushed her $80 hat on his head. 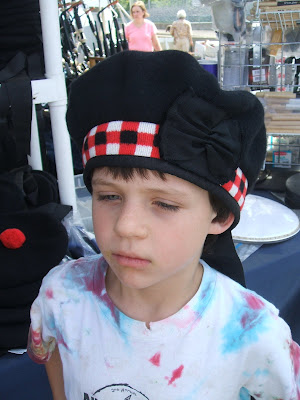 There was tent where contemporary Gaelic rock blared for hours. There were massed bands (bagpipes drums, what have you). There was a caber toss. Only one guy got the caber, which is another way to say "log", to go end over end, which is the object of the event. Some women were throwing a sack of hay over a pole in a kind of hay-toss high jump. When is that going to be an Olympic event? But can you believe, not one image of Willie anywhere in sight? I liked this though: 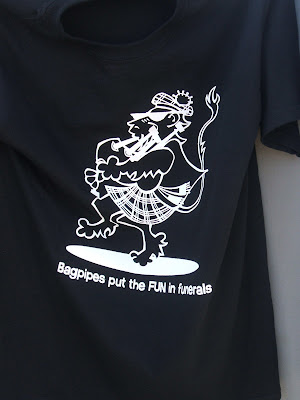