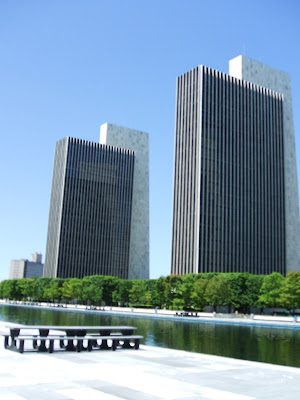 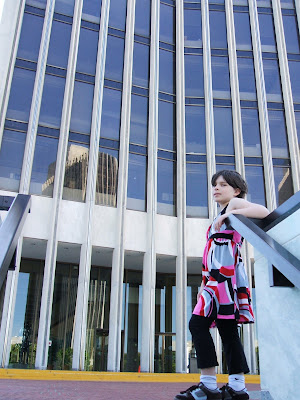 Nelson Rockefeller, erstwhile governor of New York and famous patron and collector of modern art, was embarrassed by the slums of Albany back in the 1960s, when he had to drive through them with the Queen of the Netherlands. This Plaza was his answer. (Albany is the state capitol, by the way). Goodbye slums; hello monument to Rocky. The art critic and historian Robert Hughes's famously commented that the place was terrifying and he could imagine a swastika on the top of any of these skyscrapers. I have been coming here my whole life, and now, although I can't really argue with Hughes, I like it. The sunshine helps; of course. We had the whole freakin' place to ourselves this Saturday when we went to visit the fabulous New York State Museum located here (a museum every weekend, that's us). The day was perfect; Kid 1 had a new outfit (so Rhoda Morgenstern); it was just time for a photoshoot; time to unleash my inner surrealist, who has so little play in Vermont. (You may think that's a good thing after viewing the video.) If you have forgotten de Chirico from your art history class, here are some refreshers. I never go to this place without thinking of him. 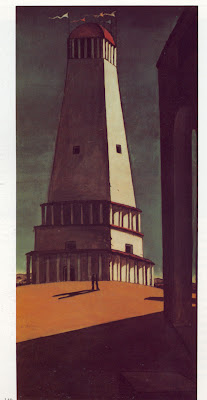 Giorgio de Chirico, Nostalgia for the Infinite (ca. 1911). From http://www.colchsfc.ac.uk/art/cities.htm.

Here's a snippet from the Wikipedia article about him:

De Chirico is best known for the paintings he produced between 1909 and 1919, his metaphysical period, which are memorable for the haunted, brooding moods evoked by their images. At the start of this period, his subjects were still cityscapes inspired by the bright daylight of Mediterranean cities, but gradually he turned his attention to studies of cluttered storerooms, sometimes inhabited by mannequin-like hybrid figures.
Posted by Kim Velk at 7:32 PM 1 comment: