My Church Ladies and Me 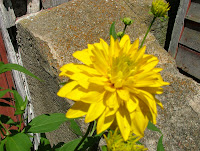 By descent, I am a plain vanilla low-church Protestant. My mother’s parents, the Starks, were observant in the way of their generation – Methodist church every Sunday, never any gambling or drinking - I remember Grandma telling me that it was wrong to send back the Publisher's Clearinghouse come-ons because that was "a lotttery". The Stark's social life revolved mostly around the church men’s service groups and women’s service groups. My Father’s parents, the Schencks, had a similar heritage; my great-great-grandfather had even been a famous United Brethren preacher back in their home state of Indiana. My paternal grandmother told me once that she remembered one kid in town named “Schenck” Johnson, poor kid. But Dad’s parents didn’t have that religious instinct and church wasn’t part of the picture for him and his 11 brothers and sisters growing up on their upstate New York dairy farm. The keeper of the religious flame, and the one who actually passed something of it on down, yay, even unto this generation, was my Mother’s Mother, née Blanche Love in Livingston Manor, New York in 1904.

Grandma and her ilk, children of the Depression and Prohibition, were, no doubt, one reason for the unspeakably prissy Methodist practice of serving of grape juice at communion. Once, when my brother was a teenager Grandma pinned him into a discussion about alcohol. She was not a forceful person, or a very bright one, but she was genuinely worried about her grandchildren falling by the wayside and winding up in Hell. She was in her 80s by then and it was my brother’s teenaged mistake to engage her instead of just agreeing with whatever she said (she took these things hard). My brother pointed out that Jesus drank wine. Months later she had prepared her rejoinder: nowhere did it say in the Bible that the wine was fermented. Touché, Grandma.

In their younger days, she and Grandpa had been members of that uber-Protestant organization, the Free and Accepted Masons; (Grandma was in the sister organization, Order of the Eastern Star). I must have shocked her myself in my middle school years when I told her I was toying with the romantic notion of becoming a Catholic. I don’t recall that she registered any shock. I do recall at some point along the way her telling how they once had a Catholic teacher at the school she attended as a child: “On her first day there, she opened the stove and threw the Bible right in!”

This was a non-sequitur to me at the time and I can’t remember if she explained then or I learned later that Catholics were not supposed to read the Bible, being as their priests had the task of interpreting everything for them. Treaty of Westphalia or no, The Thirty Years War smoldered on in Grandma’s little world. Before she finally slipped into Alzheimer’s oblivion, however, she had learned sufficient ecumenical tolerance to boast to me once that she now had a Catholic girl cut her hair.

But this is the worst of her faith; the bath water. It is the mistake of atheists and agnostics everywhere that they focus on this bilge and miss the baby. In their old age, she and Grandpa, (who had been raised as a Presbyterian but had gone Methodist under his wife’s influence), used to pray together every day in the morning, holding hands by the dining room window. I saw them at this once or twice and thinking of it now brings tears to my eyes. They were always trying to be good. They believed. And if it is true that “by their fruits ye shall know them” (and I think it is true) they were good people who, by and large, did good things.

It was Grandma Stark then, who insured that my own mother and her sisters grew up going to the Methodist church. Mom was a product of Methodist Youth Group, Skye Farm summer camp (an Adirondack camp known to every Methodist church-goer in the state of New York) what have you. Mom’s general church heritage and religious literacy was useful to her many sisters-in-law as they came of age and needed ministers and churches for their own weddings.

Mom, then, was the driving force behind our growing up in the Methodist Church in our home town of Schenectady, New York. (q.v., http://www.troyconference.org/home.asp?site=epumc) It was the ‘70s and we were not so methodical as our ancestors. We made it to church about once a month. We were the family that was late every spring when they changed the clocks. It being the '70s, and my parents being college-educated middle-class types, the Updikean, Me-Generation, Ice Storm family melt down eventually overtook us all. Mom and Dad separated when I was 12 (brother 10, sister 14) and we all went down the then not-so-well-worn path of middle class family dissolution and reconstitution with step parents and siblings. Still, however, despite the jolts, or maybe because of them, we went to church whenever Mom could organize us into the car into for the 11 AM service.

Fast forward to the present: in 1994 I married a lapsed Catholic (in that same Schenectady Methodist Church) with my sister remarrying a Mormon at the same time. (It was a double wedding). Grandma and Grandpa were too addled and frail by then to go but it was because of them that we stood where we stood and took those Methodist vows. As for my own kids, it was owing to Blanche that I brought them to the little Congregational Church in North Troy as babies (not newborns, we Protestants don’t have to rush) and had them both baptized. They now go to Catholic school – not because I want them to learn to be good Catholics (a religious foundation is a good beginning, and a Catholic one is OK with me) but because I want them to learn in an orderly environment among the children of people who are taking particular care with their children’s education. I have taken them to Church a few times - not nearly so often as we went - in the faith of our Fathers. They don't understand why there is any difference between Christian churches and really, neither do I.

Grandma might have been scandalized once. I hope I am right that wherever she is now she is over that.
Posted by Kim Velk at 3:11 PM No comments: