A Short Report; Offenses against Nature and Good Taste

The weekend approaches. It has been a pretty good week, though very wet, here in Northern Vermont. I did my lawerly part to keep a mentally retarded sex offender in state custody for another year. Phew. His lawyer put him on the stand (uh oh). Offender testified he didn't want to hurt anyone again. (Original victim, age 8, daugther of girlfriend. Offender believed child came on to him). I asked one question. "If you knew you would not get caught, might you try to have sex with a woman who did not want to have sex with you or a child?" Pause. Him: "Maybe." "No further questions." The judge congratulated offender on his candor and asked me to draft an order. That made for a good day's work.

On the way home tonight I broke the rule of not driving over a road covered with water. There were floods everywhere and the worst one was in Westfield, about ten miles from the Last House. This flood was attended by a guy wearing a fluourescent vest with a reflective strip. He was standing on the road next to an old American SUV. A semi-official, volunteer fireman, I guessed, but it made me feel safe enough for me to pilot the Camry (1993-221,000 miles) across the flood. We exchanged a neigborly wave after my safe passage.

Not too far from that little flood is my favorite auction house. They have an auction scheduled for this weekend and I just had a look online at the preview. The following items are heavily featured. 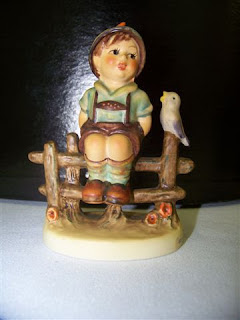 There is good kitsch and then there are Hummels.
Posted by Kim Velk at 9:12 PM 1 comment: