Leaning Out for Love 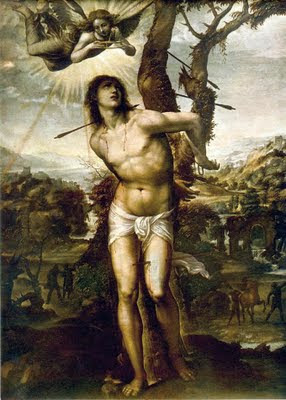 I was laying in bed this morning thinking about the evoloutionary origins of human beings and how these account, still, for such a lot of bad behavior (including some of mine). I lay there resolving to be a better person, and to share this, my Special Insight, with the world, or at least the eight or ten people who stumble in here periodically. (Sorry, but I can't help this kind of thing. In addition to the cavemen of Europe I am descended from a long line of white Protestants who were nothing if not terribly earnest. I see you, you God-fearing bourgeois people with your spooky inner lives! I am shaking my fist at you here for some of the baggage you passed down this far. [Thanks for the immunity to various diseases and length of bone, though]). So, here goes.

Back when there was a serious people shortage on planet earth, a state of affairs which I believe persisted for hundreds of thousands of years, and survival of the human race was a very close call, we had written into our DNA a preference for people who looked the best and held out promise for mating and hunting and such like.

I found myself imagining a scene that I'd bet was repeated in the cold forests of prehistoric Gaul and MittelEuropa for a thousand generations or more. To wit: a small group of fur-clad youngish people and children walking away from a seasonal dwelling place. Behind them, at a dwindling fire, would crouch an old lady, or old man (of 45 or 50) or some of each, perhaps, left to die. Would the able-bodied have left the old people with food and furs, I wondered? Did the old people cry pitifully so that the departing had to plug their ears? Would the leader of the band mercifully brain the old people with his club before the he and the rest all took off for the coast? And what would have become of the damaged or defective in those days? I expect worse horrors awaited them. I have no problem believing our ancestors lived by a simple equation: damage = death. Infanticide, chucking into the sea, abandoning in the forest. If you couldn't dig for tubers, or carry a baby, or throw a spear, or at least run, you were out. Way out. Doomed.

And still the world and we our selves are often governed (or overmastered) by those same forces that dictate the seating arrangements at middle school cafeterias.

I remembered hearing Pope John Paul II say something once about how we, the well, should not avoid the sick and the dying, but seek them out. Thinking of the cruel anvil of evolution, this message seems especially tender and comforting.

And so Saint Sebastian makes his first ever appearance on my blog. I'm not actually a Catholic, but once you have seen a painting or two of St. Sebastian, he is hard to forget. When I think of elaborate possibilities of cruelty and suffering, and endurance, I think of him. And here's a fun fact, he's the patron saint of at least four towns in Italy, one in Spain, as well as raquet makers, diseased cattle, gunsmiths, bookbinders and plague victims. He's also credited with a bunch of miracles which seem the kind of God's magic tricks that make Catholicism an easy target for some. Not me though. Not, tonight, at least, when I am trying to let the better angels of my nature guide my thoughts. Love one another. Sigh.

More may be coming in some other post about the origins of this particular train of thought, or maybe not.

See the last post. Whusband is off in Washington, D.C. this weekend and I persuaded him to trust me with the laptop he bought a month or two ago for "the family." (After it arrived, he decided it was too nice to actually be used at will by the family, but to his credit he is shifting his position). The lost laptop is still lost and I despair of ever seeing it again. I have concluded, in fact, that it was probably actually stolen, since my contact information was in a manilla envelope in the front pocket, and it should have surfaced by now. The good news, the homeowner's insurance people may come through with coin for a replacement.

I was thinking about writing a post about my brushes with celebrity, having read a few fun and interesting ones elsewhere recently. So, if you've been frightened or appalled by this, check back soon.
Posted by Kim Velk at 7:11 PM 3 comments: