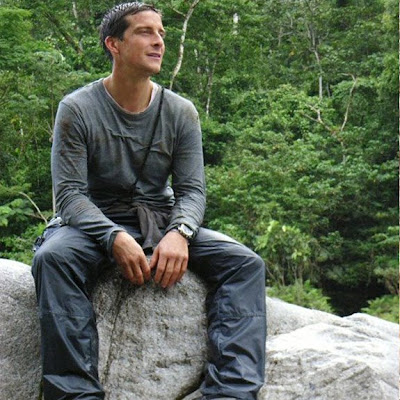 In each episode of Man vs. Wild, Bear strands himself [and his cameraman and his caterer, for all we know] in popular wilderness destinations where tourists often find themselves lost or in danger. As he finds his way back to civilization, he demonstrates local survival techniques, including escaping quicksand in the Moab Desert, navigating dangerous jungle rivers in Costa Rica, crossing ravines in the Alps and surviving sharks off Hawaii.

Bear: (Shouting into camera to be heard over noise of helicopter blades).
We've come to Montreal, one of the most popular tourist destinations in North America. It's a big city, with a really extreme climate. In summer, it's hotter than Mexico City and in winter its colder than Moscow. Making things tougher, most of the people in Montreal don't speak English as their first language. Many speak a kind of French called "Quebecois" and with all the immigrants to Montreal in recent years, you never know when you speak to someone in English if they are going to understand you.

We're headed for Mount Royal Park, the largest city Park in Montreal at more than 120hectares. The park was designed by Frederick Law Olmsted, who also designed New York's Central Park - but Montreal went nearly broke in the 1870s and the park was not completed to his design. So if you come here with Olmsted's plans for this massive city park, forget about using those to get around. Unless you have a more modern map, you're going to have to find your own way through the dozens of paths, trails, staircases and pavilions that line this volcano, long believed to be extinct. And if you've got a fear of heights, it's going to be even more difficult. The summit of Mount Royal looms over the city at a height of 234 meters, or more than 767 feet, not counting the lighted cross or transmission towers at top. But we're not starting at the top. We're starting at the bottom. It's July and its hot, nearly 30 degrees Celsius or verging on the high 80s in Fahrenheit. I am wearing typical tourist gear - sandals, shorts and a T-shirt. I do have my knife but no food or water.

(Bear leans into the camera then falls back toward a large green space. His parachute opens)

Bear: Now, it's true that most people don't arrive here on the eastern foot of "Mont Royal" as they say in Quebecois, by helicopter. But traffic can get pretty bad on Parc Avenue and there is NO PLACE to park. Parc Avenue also has a really strange traffic pattern. It has three lanes, and the middle lane is sometimes open to north flowing traffic and sometimes to south flowing traffic. If you're not used to watching out for the white arrows or red x's that indicate when that lane is open you can get yourself into serious trouble fast.

(Gestures to a statue near to where he is landing and folding up his parachute; camera pans an angel on a tall pedestal flanked by lions couchant)

Bear: This World War I monument is quiet today, but on Sundays crowds of drug users and people with little or no sense of decency crowd around these bronze lions for something called a "tam tam", a kind of informal communal drumming meet that's been going on here for years. The authorities pretty much leave the drummers alone, but there was a lot of graffiti on the base of that statue for a while and lots of the drummers do not wear shirts, when they really should. If you come here on a Sunday, you may want to think twice about getting too close to the tam tammers.

But our objective is the top of the mountain, and we had better get started. I'm thirsty, I haven't got anything to drink, and there is no free potable water anywhere near the bottom of the mountain. To get that, you have got to go up.

(Camera pans to the bristled top of the hill where we see a tuning-fork shaped transmission tower and a large metal cross).

Bear (walking). From the Parc Avenue entrance to the Park, the easiest route is up this graveled road, but this is a really popular park, and if you're going to walk on this road, you had better beware the mountain bikers and joggers who can come barrelling at you at a tremendous rate of speed. Also, there are still from time to time horse drawn carriages taking tourists up the road. These rides are really expensive, so you probably won't want to take one yourself. There are also mounted police that patrol the Park. So, especially if you've got sandals on in the summer, you will want to be aware of the risk of horse droppings on this road.

(shot of fresh horse manure, which Bear picks up and mushes between his fingers)

Though I am really thirsty, I don't want to chance squeezing the water out of these horse droppings. I could get a nasty g-i infection from it and I know there is water ahead. But, even in the shade, I am hot and I need to get to water now. Luckily, if you're in a hurry to get up Mont Royal, you can leave this road, and take the stairs.

(He turns to a long, wooden stair case. We see a shot of him from higher up the stairs).

Bear: You can get all the way to the "Kondiaronk Belvedere", a semicircular plaza with a chalet, overlooking downtown Montreal on these stairs. Once you're there, you're almost to the summit. This chalet and plaza were built in 1906, and, though no one in Montreal is likely to know this, it is named for the Huron chief Kondiaronk, who signed a major peace accord with the French regime in 1701. But, it's a lot of stairs. Hundreds of stairs. Last year an overweight woman got halfway up one of the longest sets and suffered a heart attack. She tumbled back down nearly to the bottom and only just survived.

(Bear runs up the remaining stairs. We see a panoramic shot of downtown Montreal). 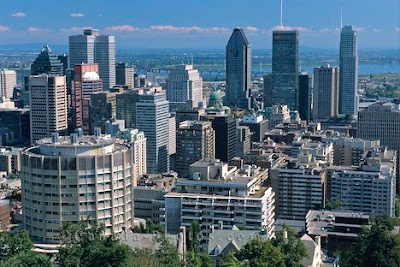 Bear: It's not an easy climb, but it's worth it. Woooooo! Look at that view! Now let's see if the Chalet is open so I can get something to drink. 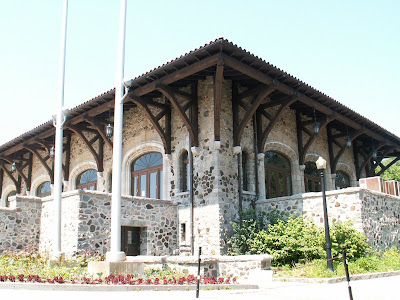 (Shot of Bear wandering in an empty, large room, sort of like a medieval dining hall. He approaches a vending machine).

Bear: There are some vending machines and a snack bar here in the chalet, and they are open, which isn't often the case. But all I have with me are some 20p coins and 10 pounds. I can't use these here. I'd really love an ice cream but, because of rich subsidies to Quebec farmers, dairy products are really extra expensive here. There's a water fountain near the men's room, but it isn't working. The person at the snack bar wouldn't give me a free cup of water, I am not sure he understood what I was asking for. So, my hunt for water has to continue.

(Bear approaches a bank of doors, tries several, finds one that opens, and exits. We see him next with trees close in on either side of him).

Bear: There are miles of trails through these woods on Mount Royal. During the winter, people ski on them. In the summer, people walk on them - and do other things. I need to keep my eyes open - I don't want to be propositioned by one of the local homosexuals, but not too open because I don't want to see what they may be getting up to. This is the shortest route to water though, and I need some now.

(Shot of a large, stone watering trough in front of a handsome stone building)

Bear: This trough was constructed here by a local animal lover for the horses that once dominated the road up Mount Royal park. It's near the giant cemetery that dominates the western slope of the mountain. It's made for animals, but the water is clean, it's clear and I'm thirsty.

(Bear ducks his head into the trough).

Bear: Well, that's better. Now I'm hungry. From where I am standing I can see Beaver Lodge and Beaver Lake. Let's get down there. We'll have to make our way through some really ugly sculptures from the 60s and some Haitian guys playing soccer but after those stairs, that will seem easy.

Beaver Lake, or "Lac au Castors" as some people say, was dug out in the 1950s. If your sensitive to Brasilia-gone-wrong architectural disasters, stay away. But if you want to skate or sled in the winter and you're in Mount Royal park, you're going to wind up here. Since it's July, there are no sleds today, and the ice cream vendors are out in force, but I still have my problem with not having any local currency. They might take US dollars, but I don't have those either.

(Shot of a flock of ducks swimming in a weedy lake. Bear crouches by the cement edge of the lake).

Bear: I have my knife, and these ducks would make a suitable meal. They're practically tame and I could reach in and grab one and break it's neck. The famous squirrels of Mount Royal Park are also easy prey. If you need to catch one, stand still and hold out your hand, as if you have a peanut. A squirrel will probably jump on your thigh to get the peanut - grab it and squeeze. Watch your fingers.

However, the ducks and the squirrels here have a really horrible diet of picnic leavings, strange Canadian snack foods, and garbage, so the meat is questionable. Also, given the number of families out at the park today, I have decided not to kill one. Fortunately, I also have dinner reservations. I know that if I walk due west from Beaver Lake, I will find the park access road. One really important thing to remember about getting around in Montreal, is that if you are going downhill from the south side of Mount Royal park, it means you are heading downtown. Once I get to the access road, I just walk down hill, toward the St. Lawrence River. Then I should be able to find the Omni, and safety.
Posted by Kim Velk at 5:31 AM 3 comments: