An Insomniac and her Dog 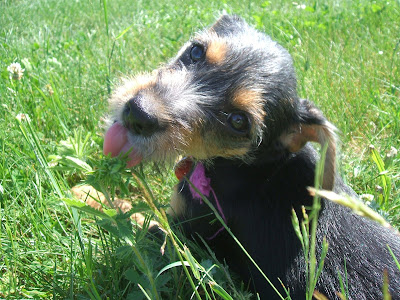 Maisy occupies the geographic center of my bed, forcing me to sleep with my head at one corner and my feet at the opposite corner - like a bar sinister on a family crest. Tonight, I mean, this morning, I gave up trying to sleep and switched on the light. My plan: read a couple of stories from my new library book, return to sleep.

After a story and a half, I put the book down and, as I considered whether I was really sufficiently sleepy to quit reading, I looked at Maisy.

She had rolled onto her back, achieving a gentle c-curve, like an eyebrow. Though I couldn't see her face, which was obscured by my leg under two comforters, I knew from the bit I could see, (pink stomach and forepaws), that her head was lolling, ears flipped to the smooth side, nose pointing nearly at the foot board. I couldn't see her rear legs either but knew that in this posture, they must be splayed in the relaxed and undignified way of the sleeping terrier. Her right fore paw flopped down at the joint. Her left fore paw, however, was sticking straight in the air - a raised hand.

"Yes Maisy?" I asked inwardly. "Do you have a question?"

"All right. And what is that?"

"I know you already know this, but, I just have to say, you are for me the Sun the Moon and the Stars. I worship you. There's pretty much nothing I wouldn't do to be with you."

"Like, you know that famous dog, the one that built a monument to in Edinburgh?"

"I think his name was 'Greyfriars Bobby'."

"That's it. He's the one that sat on his dead master's grave for six years, til he died there himself?"

"I know you would." (I don't let on that as the actuaries have it, she is not likely to outlive me - her sentiment is so fine). "Now how about letting me get back to sleep."

"Anything for you. Good night again."

"Goodnight. Do you think you could move to the edge of the bed."