Recent Viewing - Thumbs Up From Woolfoot: Ghost World and the Diving Bell and the Butterfly

I have stolen a little time in the last few days to see some "films" (not mere "movies") here at the Last House. Neither one of them needs any boosting from this obscure corner of the internet, but I liked them both so much I decided I had to say so here. 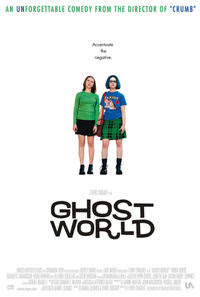 I found myself recently trying to describe to a friend what was meant by the term "ghost world" in this movie. It's that nowhere-and-everywhere suburban landscape that now makes up huge swaths of every largish American city. Drugstores, convenience stores, stoplights, fast food restaurants - an arid unidentifiable nowheresville. (My friend and I were discussing what makes northern Vermont different from the Rest of America - the dearth of "Ghost World" settings is one thing). The conversation got me thinking about the movie, which I saw once, years ago, and how I would like to see it again. Back to my beloved Stowe Library where they had a videotape with a little "classic" sticker on it. Funny that this film, made in 2001, has become a "classic" but I agree that it merits the designation.

Here's a snippet from the relevant Wikipedia article:

Ghost World is a 2001 film by Terry Zwigoff, based on a graphic novel by Daniel Clowes, also titled Ghost World. It stars Thora Birch, Scarlett Johansson and Steve Buscemi. Although the film was not a box-office blockbuster, it was enormously acclaimed by critics and has established a strong cult following.

The story focuses on the life of two teenage friends, Enid (Thora Birch) and Rebecca (Scarlett Johansson), who are outside of the normal high school social order in an unnamed suburb, often assumed to be in or around Los Angeles, where much of the movie was shot, [...]

I remember I liked Ghost World a lot the first time around, but it was even better this time.

At its heart, it's a coming of age story about a young woman artist, Enid. The movie begins as Enid and her long-time best friend Rebecca are leaving high school. They had a place in school, a well-understood one, as eccentrics; the too cool bohemians of the class. Now, school is over and they have to put their money where their mouths have been. This means getting jobs and an apartment together. Not so easy as it sounds, Enid discovers as the film moves forward. While Enid and Rebecca are in the planning stages for their new life in those first weeks after graduation, they play a mean trick on Seymour (Steve Buscemi)based on a sad little classified ad he had placed. Seymour is a loser of the Simpson's Comic-Book-Guy ilk. He's so good hearted, well meaning and intelligent, however, that while Enid came to jeer, she stays to cheer. Things are so much more complicated than she had expected or formerly understood. It all rings true, and it's very funny as well as painful. Of course I identified with Enid, although I was never that cool.

Sign me up for the cult following. I know I could watch it 10 more times and still see new things every time.

The Diving Bell and the Butterfly

This was on the recent arrivals DVD shelf at the library and I snagged it. I had read The New Yorker article a few months ago about those who were "locked in" (i.e., brain working fine, body not at all) and had heard lots of other buzz about this movie. My office mate had recommended it and she has a track record for picking winners.

As the whole world knows by now, the book on which this movie was based was written by Jean Dominique Beauby. Beauby was the editor of Elle magazine in the mid 1990s when he suffered a massive stroke. He was in his early forties, at the top of his game in all areas of his life, the father of three, lover of many, and, suddenly completely paralyzed. [Warning - Potential spoilers ahead!!]

Beauby retained the ability to blink one eye and in this way, using an alphabet based on the frequency of letters most used in French, he dictated his book. He died 10 days after the book came out (to rave reviews). Julian Schnabel, the famous contemporary artist, made the film.

I liked the movie a lot - more than I had expected to. I have to say, though it was hardly the main point, one of the things that really struck me was how elegant and lovely were all the French actresses. (Schnabel's wife was one of them, I have read). He captures something really attractive in the French female character - an easy glamor. For an hour or two at least (I watched it during a bout of insomnia at 4 AM)I was determined to go on a diet, buy a form-fitting trench coat, some scarves and live on green vegetables, red wine and oysters. My resolve faded by the afternoon (Burger King at 2 PM) but I still think it is a fine resolve.

Beauby's dilemma is unimaginable, but this seems to me a great realization of the unimaginable. Beauby is trapped in the diving bell of his body - like one of those pre-Cousteau diving suits - (the metaphor is photographed for us and repeatedly shown). The butterfly of imagination survives, however, and can take him anywhere. The love and care he apparently got following this disaster was impressive - as was his response. I have heard Stephen Hawking say (in another film) about how his illness is, in some respects, the raison d'etre of his achievements. Beauby wound up in a similar situation. Talk about making the best of it.

I was also glad to see Max von Sydow again as Beauby's father. They don't make them like that anymore...

Comments welcome. Anybody else need to unleash their inner critic?
Posted by Kim Velk at 6:29 PM 2 comments: