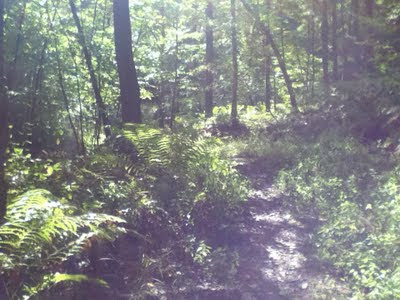 I was watching BBC World News the other day and saw pictures of poor, inundated Vermont being beamed around the world. I am happy to be able to report that the Last House and our Stowe Weekday Abode escaped unscathed. Really, it's like nothing ever happened - except (and I am not making this up) the State office complex where I work was badly flooded and I and about 1700 other people have been forbidden to go to work. Maybe for months. (You know, I had been working extra hard this summer til Irene soooooo...)

As usual, I have been reading, that is, re-reading Middlemarch. I finished it (again) today. I got to the last lines, which always overpower me. I am sharing them here, though they are out of context and so I am not really being fair to you all or George Eliot but I feel compelled to type them out.

[T]he growing good of the world is partly dependent on unhistoric acts; and that things are not so ill with you and me as they might have been, is half owing to the number who lived faithfully a hidden life, and rest in unvisited tombs.

These lines refer to Dorothea Brooke Ladislaw - the Alpha and Omega character in a book that some wise critic referred to as "spacious." Here too is a link to the valentine that Rebecaa Mead wrote to Middlemarch in the February 14, 2011 issue of the New Yorker. (q.v.)

Also, the picture above is one I took during a walk in the woods on the sunny day after Irene... As I say, all is well in my grassy corner. Thanks to those who have inquired.
Posted by Kim Velk at 8:04 PM 3 comments: 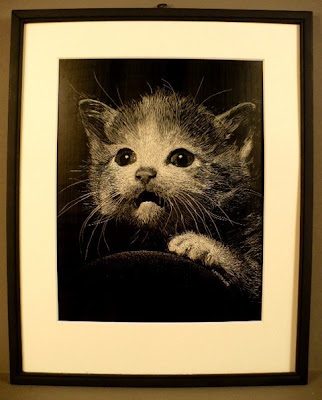 I bought this on ebay.

I met a guy recently who impressed me tremendously. He's a naturalist from the state of Delaware who retired in Vermont some 20 years ago. He's 86 years old and he looks like 30 years younger. I mean, strong legs, straight back, clear eyes - hearing that is way better than mine. When we met he told me he and his wife had been out every night for the last six nights, mostly listening to classical music or going to wine tastings and the like.

It came up in our conversation that he had written and illustrated a few books of natural history while he was still working. He explained that he used something called "scratchboard" to illustrate these books. I didn't know anything about scratchboard and he explained. It's pretty much like it sounds - you scratch away the image from a board and the board can than be used to make prints.

So..... Fast forward a few weeks and somehow, while searching for paintings of Terriers I saw this kitten. I am not sure how that happened, but you know how the Internet is.

I don't know if what I have here the actual scratchboard or a print. I don't want to break it out of the frame and it hardly matters to me. I was just lured in by the "scratchboard" part of the description - and the eyes. This item was created by an artist called Helen Anderson and the ebay seller was trying to gin up interest by noting that Ms. Anderson had an auction record of $750. (My price, $9.99 and I was the only bidder.) Can you believe it?

So, here is an addition to the collection who now gazes up at my cracked ceiling with his little open mouth and wee paw fetchingly placed on, what is that? A ball? Whatever.

At dinner tonight, while he was refusing to eat the broken hamburger that his father was trying to sell as "sloppy Joes" Shack said, "If I were a monster, I would eat all of the human being except the head. Who wants hair with their human?" 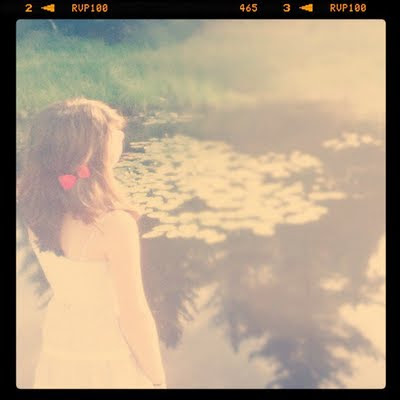 Just stopping in on a Sunday PM to say I know I have been lame, remiss, what have you, about getting fresh stuff in here. Work has heated up unpleasantly - in August! And there's the usual family stuff to attend to. I have managed a couple of bike rides and the Ustudy and I took the picture above on one of our periodic photo shoots. I took the picture and she ran it through instagram - destined to be a visual cliche of 2011 but isn't it cool? Hope the summers of any stoppers-in are going well.
Posted by Kim Velk at 4:57 PM 4 comments:

Click the link above for a little inspiring GE propaganda. That's my Dad. The genius.
Posted by Kim Velk at 8:33 PM 2 comments: