The Depressing Signs of Spring

The first body turned up on Thursday morning. The victim was an Australorp, a breed known for ease around humans and striking black feathers. Judging from the loss of those feathers this winter, as observed when the little flock was recently released from the coop for some time in the yard, she was also low chicken on the pecking order.

Dead, just before spring. “Like a soldier dying the day before the war was declared at an end” said Whusband, who found the body.

The horrible surmise was that the other four hens, perhaps stimulated by their first break from the coop in months, had pecked her to death. It was a horrible surmise but also a reasonable one. The Australorps had been added to the two surviving members of the flock we bought last summer and so had always been junior members - and she was the most junior among them.

The senior hen, Mable, was a survivor extraordinaire. She had lived through at least four predator holocausts. Each time something got at our birds, we tried new security measures. Their A-Frame coop, covered with tarps and foam insulation for the winter, is surrounded on all sides by chicken wire – including the floor. We replaced boards around the bottom this fall. The winter has been a bear, and the chickens showed the signs of their hard winter when I sprang them for the first time a couple weeks ago.

Imagine my horror when I came out yesterday to release them and found Mable in a nest bucket, feet up, a literal stiff.

Funny, given all the chicken I’ve eaten, how horrible it was to find trusty, clever Mable down. Two summers she has wandered around the yard with her Sancho Panza, the other clever hen called Buffy. The two of them would appear whenever we came out, following us here and there. Once I removed the body I saw that she was in the midst of egg laying, and I figured she had become egg bound. Poor thing, what a way to go.

It was a nice day yesterday so I let the three survivors wander around for the afternoon. Buffy and the two Australorps sunned themselves on the front porch of our little cabin. I shooed them back in the coop for the night and sealed it up. I went to give them some bread this morning. No one came to the door of the coop. Black feathers were everywhere. Really. I wanted to cry. The first day of spring. I am rethinking the cause of death of the first two birds...

If we get anymore chickens we’re getting a proper building with a hard floor and some perches up high in case some horrible weasel breaks in there.

Also, it's mud season. See below. 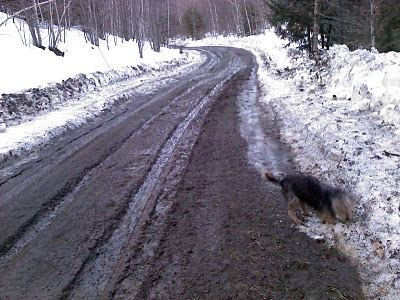