The great state of Vermont today honored the victory of the Americans at the Battle of Bennington. That battle was fought on August 16, 1777 and is commemorated in Vermont by a big Monument (q.v.) in the lovely southern Vermont town of Bennington and, equally important, by giving a paid day off to all us good state civil servants. It was really an important battle. Wikipedia to the rescue:

The Battle of Bennington was a battle of the American Revolutionary War, taking place on August 16, 1777, in Walloomsac, New York, about 10 miles away from its namesake Bennington, Vermont.[1] An American force of 2,000 New Hampshire and Massachusetts militiamen, led by General John Stark with aid from Colonel Seth Warner, along with elements of Vermont's Green Mountain Boys, defeated a combined force of 1,250 dismounted Brunswick dragoons, Canadians, Loyalists, and Native Americans led by Lieutenant Colonel Friedrich Baum that British General John Burgoyne was attempting to push through the northern Hudson River Valley.

Thank you General Stark for preventing the (then) evil British from having their way and for stopping them and their cronies from strangling our infant country in its cradle. Thanks also for getting me this day off.

I, appropriately, spent my Battle Holiday buying stuff in Vermont. Mostly it was school stuff for Kid 1 and Kid 2 but I also, finally, stopped by this little antique store that I have been driving past for 15 years. I don’t think it even has a name, but it looks so enticing. The owner was a tiny little guy selling cheap stuff, some of it good, mostly not, but what a great little place. I bought a pair of Made in Japan ceramic bookends from the forties or fifties (I am guessing). Two bucks. I’ll try to get a picture into a future post. 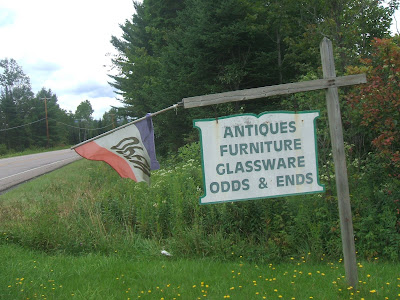 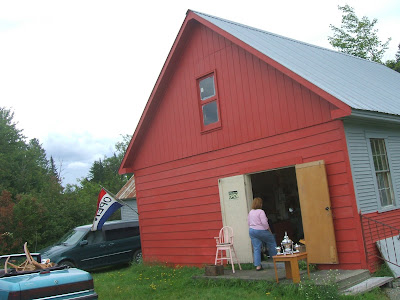 That isn’t me going into the store, but another sister.

The owner told me the building was one of the three one-room school houses that once served the little town of Eden, Vermont. So glad I stopped in, at last.