Halloween on the Border Hops - Who Knew? 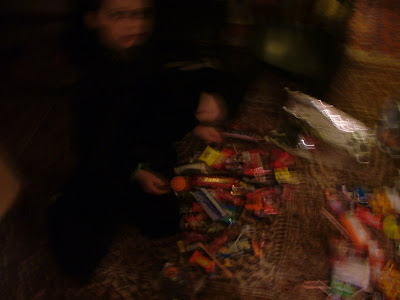 For the first time in all our years in the last house we did our trick or treating in the little village of North Troy - in which we live. If it has a claim to fame, other than sitting on the Canadian border and being a Port of Entry, it is as as rough sort of workingman's town. I suppose that's better than the neighboring town of Richford, over the mountain. A client of mine once told me that some of his Canadian friends think of Richford as the Tiajuana of Vermont. Funny, but kinda true.
Wanting to avoid gangs of vandals and cretins that I sometimes believe dominate the local population, we usually go somewhere else for trick or treat. This proved impractical this year so our kids and some of their friends in the villageall went out last night for the North Troy Halloween experience.
The local gas station/restaurant/convenience store had a way-station of coffee, donuts, cider and play doh and treats for the kids (the proprieters were dressed as Robin Hood and Maid Marion). The firemen were giving out glowing safety bracelets and candy and also manning all the streets to serve as crossing guards. The place was literally jumping. I have never seen so much activity in this little village. A couple of gay couples located here years ago (I tip my hat - I wish they'd persuade some friends to move in) their houses are the nicest in town. The garden at one of these places was like a movie set. Queer Eye for North Troy? I guess this wouldn't be universally supported but I'm all for it.
One of the parents we went with last night told me that lots of VT towns around here have banned trick or treating and ours, which is compact and has a (barely) surviving center is one of the few places to go so lots of people come from neighboring towns. People were mostly friendly and well behaved. It had a Norman Rockwell quality for the most part. A nice surprise. Happy Halloween.
Posted by Kim Velk at 2:28 PM No comments: