Mommy's Day Off - Thoughts on Rock and Doris

What a luxury at my stage in life (43 with two grade-school kids and a parttime job as a lawyer)to have a sunny weekday at home. I don't even have to fetch the kids from school! The neighbor will pick them up and take them to her house after school for a play date. Wow. Now, to make things even better, Turner Classic Movies is having a Doris Day day - it's her birthday, I guess. Right now, it's Rock Hudson and Doris in Lover Come Back (so wonderfully dated, so ironic). Putting my free time to what feels to good use, I must blog.

As I write, Doris (Carol) is contemplating in song whether she should "surrender" to Rock (Jerry Webster). The song plays in a dreamy voiceover as Doris pours the champagne in her Manhattan kitchen. She's just cleared away the dinner dishes, (noting, "That's a woman's job" when Rock tried to help). Her blonde hair is whipped into a meringue. She is wearing a beautifully tailored skirt, sequined top, diamond earrings, red lipstick. In the opening scene she whooshed into her Manhattan office in a black and white dress, hat, and gloves, that must have been by Chanel. Ann B. Davis (Alice on The Brady Bunch) who made a career out of being the plain, stalwart retainer, was close behind to help Doris with her rear-buttoning jacket. The fashions were fabulous. Back to the unfolding plot. Should she or shouldn't she? The fatal question: "surrender? surrender? surrender?" plays as a refrain.

I won't get into the plot, check Wikipedia. Who cares anyway. Aside from the technical changes in the movies, tecnicolor, panavision etc., this is interesting only as a relic and cultural artifact. How amazing to think that they packed into the theaters for the great, prolonged tease only one generation back!(The film was released in 1961 while my parents were in college). And Rock Hudson, here again on display as a paradigm of American manhood! Deceived, naive people. The mind boggles. Oops, there goes a gay joke, actually a series of them. Rock has just been deserted by the side of the road in his jockeys (Doris found out he had been wooing her under false pretenses). He has been picked up by a truck driver in one of those Maytag-repairman uniforms. "Man you were a sight," the truck driver quips; Rock standing behind him in a woman's fur coat for some reason. Next, Rock comes into his apartment building and is spied by a pair of middle-aged men, whose only purpose in the movie is to stand by and comment on Rock's virility (as Rock rushes by with various beautiful women). "He's the last guy you would have expected," one quips to the other. Ha ha. And as if that wasn't enough evidence of the yawning gulf between the mores of 1961 and 2008, the great product that the genius chemist comes up with (it's a movie about the advertising industry)is a candy that turns into alcohol in your system so you can get drunk for just ten cents. OK. That movie ended and now it's Doris and Jimmy Stewart in an Alfred Hitchcock movie. Probably less food for thought and maybe a little more subtlety. I'll leave it on while I clean the kitchen, something I will get to eventually. 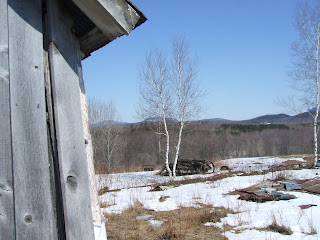 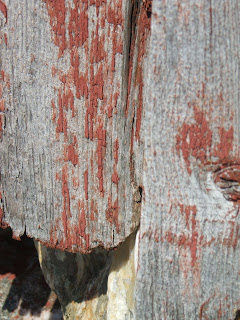 I tested out a new tiny camera that came in the mail today (an Ebay find and more prep for the great Woolfoot journey to the UK in two weeks). This little camera is supposedly for Kid 1, but she may have trouble getting it away from me. Here are a couple of shots of this bright day on the Vermont/Quebec border and the old barn here at the Last House (in extreme close up).

I Got the Suitcase! 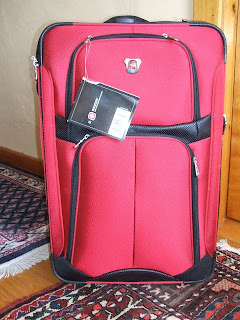 I promised an update on the suitcase search that I wrote about here the other day. Et, voila. Several stores and a large swath of the internet were scouted before I decided to part with $59.99 at TJ Maxx in South Burlington. Here is my brand new 24-inch Swissgear Roller Bag. Long may she roll. 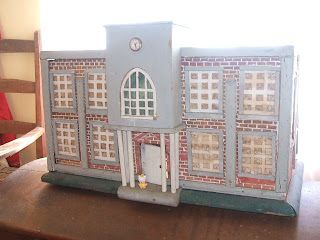 Here's a little bit of folk art I picked up at the Degre Auction House a few months back (see the auction house link on the right - one of my favorite haunts). I wanted to see how our wee new camera would perform indoors and on the close-up setting. This old edifice was called "the Federal Building" by the Auction House. I bought it because it passed the, "it-called-to-me" test, which is the only test I apply (not being willing to apply the "can-I-afford-it" test that is the main thing I should be considering). I still really like it. Some old Vermonter worked hard on it, although I doubt it came out just like he or she wanted. My daughter added Hello Kitty to the front step. Now, I think that is a Duchamp touch that makes this into modern art. I guess I would be willing to part with it for the right price. ;-)
Posted by Kim Velk at 12:46 PM 1 comment: