A Tale of Two Trophies 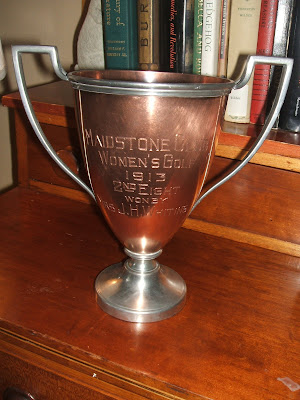 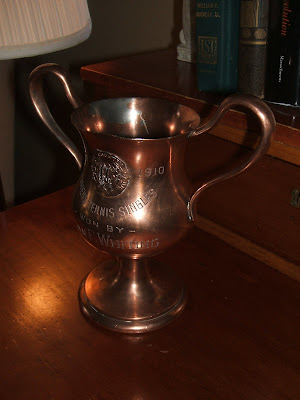 About a month ago, my favorite auction house sold a bunch of things from out of the estate of a man who had worked as a personal servant of some kind, a chauffeur I think I heard the auctioneer say, for Juan Trippe, the founder of Pan Am Airline. There were some Charles Lindbergh books, autographed by Lindbergh (out of my league – I forget how much they fetched, hundreds at least).

There were also some box lots of Pan Am memorabilia, mostly odds and ends of airline promotional items: a matchbox with a pop-up 747, tumblers commemorating various special flights, etc. I bought one such box. I looked through it then auctioned most of it’s contents on Ebay. (Attending two auctions a month means I have to operate on a catch-and-release policy so we aren’t completely crowded out of the house and so my husband doesn’t kill me).

I had Shackleton with me at the Pan Am auction. He spotted another box lot with a lot of metalware in it, including these two trophies. They also came out of the estate of the Trippe servant.

Shackelton and I both liked the look of these, so Chariots of Fire, aren’t they? And isn’t it wonderful that they were awarded to women nearly a hundred years ago? So, we pursued and won the box. In addition to the trophies, the box included a small silver-plated cocktail shaker, rusted on the inside, a squashed baby’s cup with “Marion” engraved on it, a beautiful little creamer and sugar bowl from Peru with a dimple where something hard hit it. In fact, about every piece had a flaw – a ding or a bend. Needless to say, everything was black with tarnish.

My theory is that these were things marked “discard” by the Master or Mistress of the house (I assumed the Trippes, but more on that in a minute), but offered to or rescued by a member of the household staff. The household staff member duly held onto them for God knows how long and died with them still in his possession. Their story did not travel to the auction house. I was left guessing about their origins but, at this stage of my life, this kind of guessing is my idea of a good time.

Note: I am sufficiently self-aware to sometimes feel guilty about being covetous and materialistic. OK. I am covetous and materialistic. I admit it. But there is a kind of educational silver lining to my vice. Having acquired something that I had determined to own, and before I release it (if it is to be released) I make an effort to learn a little something about it. For instance, I went off to the library after I bought the Pan Am memorabilia and read up on Juan Trippe. His wife was on a trip to Peru when Pan Am opened up its routes there. I read in a diary that she wrote and that has been published that she did some shopping in Lima. Did the creamer and sugar bowl come from that shopping trip? I wonder…

These trophies, being engraved with the names, “Mrs. John H. Whiting” and “Jean F. Whiting” gave me a particularly good place to start my research. The larger trophy was won by Mrs. John H. in 1913 for “Women’s Golf Second 8,” at "The Maidstone Club.” I don’t golf. I don’t even like golf, so I had never heard of the Maidstone Club. I learned with no trouble at all, however, that Maidstone is a very famous old country club in East Hampton on Long Island. (You have to be a member even to look at their website). Hmm.

Teeny Internet Image of the Clubhouse at the Maidstone Club

The smaller trophy was won by Jean F. in August 1910 at another venerable country club in Manchester, Vermont, the “Ekwanok Club”

Wikipedia will inform anyone who cares to know that Juan Trippe had been president of the Maidstone Club in the 1940s, but Google didn’t cough up for me a connection between him and the Whitings. Also, Trippe was too young to have been a contemporary of the winner (or winners) of these trophies, having been born in 1899. He was only 11 when Jean beat back the competition on the tennis courts at Manchester and only 14 when Mrs. John H. proved to be the best woman golfer at Maidstone in 1913.

Amazing thing that the internet is, however, with a few more searches, I was rewarded.

I found out that “John Hill Whiting” was a manufacturer of equipment necessary to build foundries and by 1911, president of the Whiting Foundry and Equipment Co. of Harvey, Illinois near Chicago. He was born Sault Ste. Marie in. 1852 and in 1883 he married, Carrie F. Spence. Voila! The “Mrs. John H. Whiting” whose trophy now sits on my dresser. John H. and Carrie had four children: Florence H.. Barbara, Bradford, and, last but not least, Jean. John H. was a Republican and a Presbyterian (no surprise there).

This information comes from, The Book of Chicagoans: A Biographical Dictionary of Leading Living Men of the City of Chicago, 1911. Harvard had a copy of and it was digitized in 2007. Thanks, Harvard. Thanks Google. Thanks Internet.

At first I had assumed that “Jean Whiting” (the tennis trophy winner in 1910) and Mrs. John H. Whiting (golf winner in 1913) were the same person with one trophy engraver using her given name and one her married name. Wrong. Mrs. John H. must have been quite an athlete to win the golf trophy when she was probably a grandmother. She had been married to moneybags metallurgist for 30 years by 1913. I was intrigued by this, and also by the fact that she obviously encouraged sports for her daughter(s).

Jean was, clearly, one mean tennis player, as well as a debutante. I soon learned that with one "Kenneth Trimingham", she won the mixed doubles cup in March 1912 on the Courts of the famous pink Hamilton Hotel in Bermuda (New York Times society pages archives – thanks NYT). Mrs. O. DeGray Vanderbilt (!) put up the cup and Jean and Kenneth just squeaked by the second place team at 9-7, 9-7. Later that same week, Jean and her mother also went to the Derby Day race and Jean was also present at the subscription dance a few days later, a dance “given by the men of the younger set” at the casino.

So we are firmly entrenched in the gilded age with Americans who probably actually knew Edith Wharton, or were maybe one degree of separation form her. (I spent a lot of time about a year ago with the House of Mirth and having these relics in my possession makes that whole lost world seem real. See the sidebar for some links to Wharton info.). As I said, this is my idea of a good time.

We’re not done yet, however. The most dramatic tidbit served up by the Internet was that my trophy winners were among the passengers on the famous, doomed White Star passenger ship, the RMS Republic. This shipwreck foreshadowed the Titanic disaster, although without the same great loss of life (or potential for a mawkish top 40 hit and a banal blockbuster film). 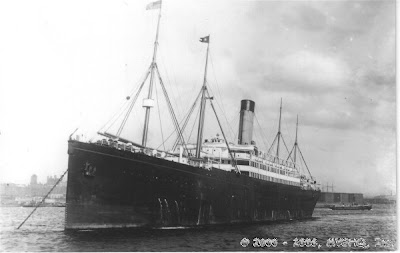 The Republic had departed New York for England on January 22, 1909. The following day, it collided with another ship. Six people died in the collision, but the Republic stayed afloat long enough for everyone else to be rescued. The passengers were evacuated in lifeboats to the other ships that rushed to the scene, thanks to the newfangled invention of shipboard telegraphy. I don’t imagine either Jean or Carrie had any trouble getting down ladders or pulling on oars, although it must have been cold in the waters off New England in January 1909. The Republic was put under tow for return to New York, but it never made it. The wreck sunk on the way back to port – with lots of treasure on board, they say.

I haven’t found in any of this what the Whitings had to do with the Trippes. My speculation is that the man who last owned these trophies may have worked for the Whitings before signing on with the Trippes in the 1960s. Maybe Juan Trippe, in the market for a chauffeur, met a Whiting at Maidstone and learned about our hero. I don’t expect I’ll get an answer to that question, but learning all this other stuff was fun and oddly gratifying.

After all this, can you believe I’m still thinking I’ll put them on Ebay? But why not? I think I have gotten from them what good they have to offer me, and I do need to have some funds for next week’s auction.

One last note:I couldn’t find any further information about Carrie and Jean Whiting and how they wound up, but some information about Jean’s sister Barbara, can be found 1914-1915 volume of Woman’s Who’s Who in America. (Thanks again Harvard):