The People Ride Through a Hole in the Ground 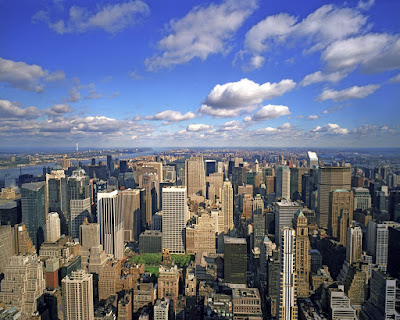 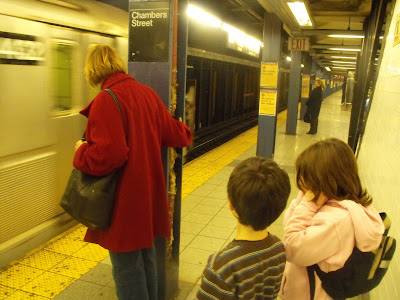 Phew. Back in Vermont having done our part in NYC over the weekend to spend the country out of this miserable recesssion.

A few vignettes for your consideration:

1. We somehow managed to stumble into the "quiet car," on the Amtrak train from Albany to Penn Station. This is a a form of library on wheels, as the conductor reminded us, particularly us, seeing we were traveling with children, numerous times. The woman seated behind Shackleton and I promptly got out of her seat and moved down the car when she saw us settle in. Thankfully, I had a deck of cards. I whipped Shackleton at blackjack all the day down the Hudson until we got to Sing-Sing. He didn't want to miss the view of the prison (at Ossining, the institution of "up the river" fame).

2. NYC on Friday last was enjoying spring. It was about 56 degrees Farenheit when we arrived. We had left the land of mist and snow and felt like we were in the banana belt. Shirtless joggers, that sort of thing.

Arriving at our hotel via yellow cab, my precious packet of hotel info., tickets etc. were caught in an updraft such as you can only get when opening a cab door on a street with skyscrapers on three sides, and an ocean on the fourth, and a strange temperature gradient. All were carried away. You know that mad scramble moment of getting out of a cab, paying the fare, getting children to sidewalk, getting bags out of trunk without wasting one second of the cabbie's valuable time? (My inner mid-westerner asserts itself at these moments and I am worried about under/over tipping, appearing awkward and like a person who hardly ever rides in New York cabs). Add to that moment a requirement to chase bits of paper into traffic and Welcome to New York! I missed the fact that my return train ticket was one of the things that blew away. This ignorance, as you will learn later, was a kind of mercy.

3. Isn't it fun to go to a hotel? We were staying at the Embassy Suites at rates that I think of as a recession special ($140 a night with the tax!). They let us check in early and we felt like kings in our suite which looked out at NY Harbor. Crane your neck just a little and there was the Statue of Liberty. 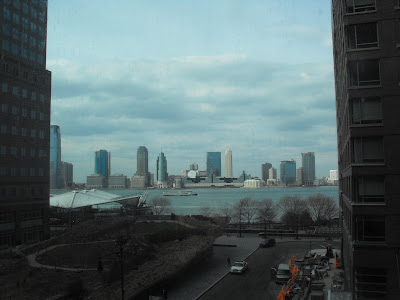 The view from the temporary last house

4. Off to the Museum of Natural History uptown. This was my first time back on the NY Subways since M. Giuliani allegedly cleaned them up. Subway man behind bullet-proof glass was periodically intelligible as he leaned into a skinny, stuttering microphone to tell us to go to the machines to buy our tickets. He smiled kindly at Shackleton and did not seem irritated by our ignorance. The Understudy saw a rat run across the track while we waited for the uptown train. She had been saying in the not too distant past that she wanted a rat for a pet. I think we're down with that. Train showed little evidence of the hand of Giuliani. 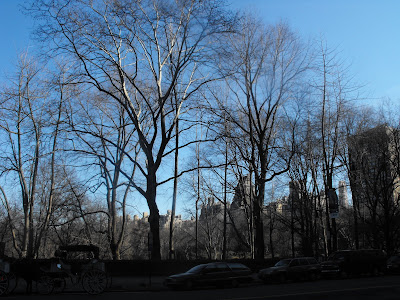 5. Ahh, Central Park. I had forgotten that New York really has beauty and magic. If I were going to live there, it would have to be someplace around the Park - like, in one of those apartments Woody Allen used to shoot the interiors of Hannah and Her Sisters. I could be happy in that New York. New York as a voyage of self discovery... Now I know I am an uptown girl. Well, former girl - do they have uptown drudges? 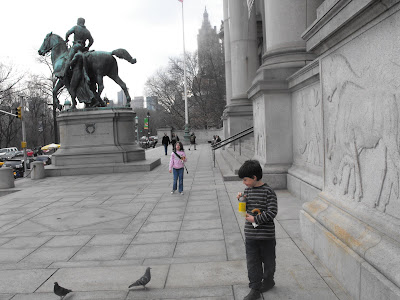 6. The kids' favorite part of the museum was not the $20 a ticket planetarium show, or the reconstructed dinosaurs or anything featured in the "Night in the Museum". Predictably, as per our usual museum experience, the gift shop was the main source of fascination. In a "quiet car" karmic moment, there was a little kid seated behind me in my $20 seat (they quake during the cosmic collisions, by the way) who began screaming, "Let's get out of here!" as soon as the dome dimmed... An usher eventually arrived with a flashlight to lead him and his mom away, thank You Know Who.

7. Lovely friend from high school with whom I recently reconnected via facebook got me on my cell phone and hiked some huge distance with her own two-year-old in a stroller to meet us all at the museum. I had given her carte blanche to avoid us; she is a painter who has three little kids and who also had at least three relatives visiting last weekend, but she came anyway. Hello and thanks again T! I loved it that my friend, the Manhattan artist who has run a couple NYC marathons, had given her baby a Homer-Simpson style donut with white icing and sprinkles (not eaten but held with interest) and that she was excited about two months of free HBO. Maybe people in Manhattan aren't so different from you and me... 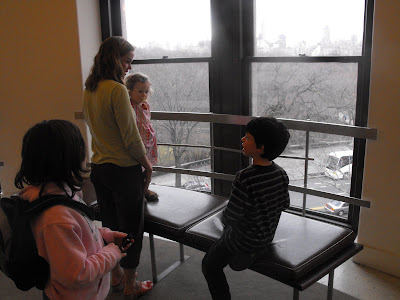 My friend and her baby showing Shackleton and the Understudy a beauty spot with a view of New York.

8. Dinner at Pizzeria Uno across from the museum, with the rain falling on the big windows and the headlights from the taxis lighting the dusk with the dark trunks of Central Park's trees across the avenue. We were served by a Jamaican waitress called "Pauline." She wrote her name on a napkin for us and put it in the center of the table to get things going. Pauline sounded like she had stepped into Uno from Jamaican Central Casting. With her accent, even "There are no free refills" sounded like a song. 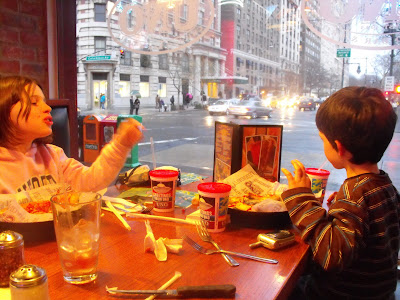 9. Highlights of the next day included FAO Schwarz, the fabulous toy store that sits at the knee of that Grande Dame, the Plaza Hotel. 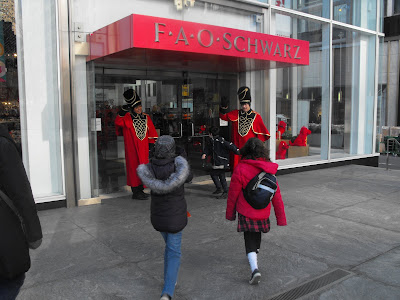 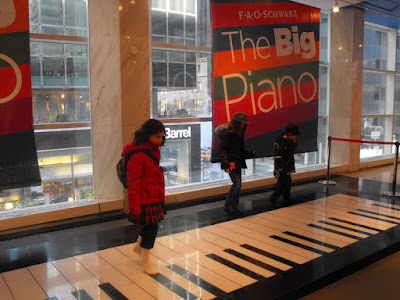 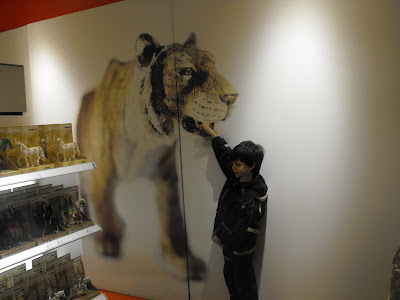 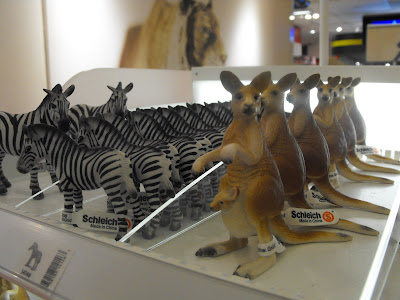 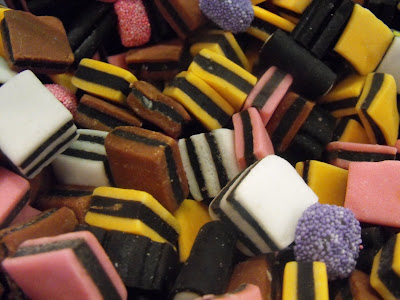 The people at FAO were really nice, like, Wisconsin nice. Wow. A clerk ran around with the Understudy and her friend giving them ideas for good digital photos. Here's the trio of kids and the nice clerk. The guy watching me snap the picture looks slightly put off by us, doesn't he? 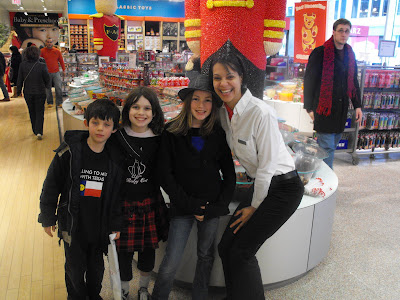 10. Other events of the day included the MOMA Design Store. I had learned my lesson and skipped the museum and went straight to the store. The kids liked it almost as much as FAO. Then lunch and the matinee of Mary Poppins. We were in the nosebleed seats but found much to admire, if not to love, about the play.

11. The next day was Sunday and our last day in New York. The hotel was next door to Ground Zero, so we walked over to pay our respects. 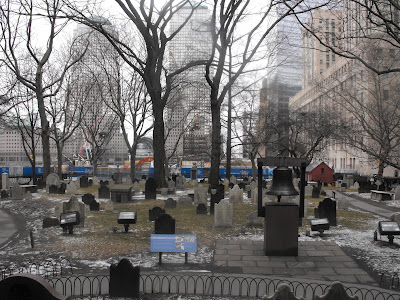 Ground Zero from the porch of St. Paul's Church

12. My big plan for Sunday morning was to visit the Tenement Museum. It is, as the name implies, a museum in a preserved lower-East-Side tenement building. I had read great things about it and decided we would walk around in Chinatown (which has gobbled up most of that section of Manhattan) by way of a cultural experience. By then, however, the wind was blowing very cold. At one point, a small Chinese woman stepped toward me with a paper in her hand and made some request, in Chinese. I don't really look Chinese, so this was curious behavior. Vermont children were complaining of the cold and slightly freaked out by the downtown scene so I finally got a cab. Unfortunately, the cab driver did not know where the museum was and, literally, couldn't find it with a map. We abandoned ship when I determined we were within a block or two (on Delancey Street - as I write I hear Blossom Dearie singing "I'll Take Manhattan": "It's very fancy, on old Delancey Street ya know." That was irony and poetry. It was not ever, and is not now, very fancy on old Delancey Street.)

We found the place just in time to take a tour of two tenements lived in by garment industry workers. I learned a lot - mostly that being a garment worker in NYC around the turn of the century and living in a tenement really sucked. Appalling, unbelievable, third world conditions prevailed. We all know this, of course, but seeing the rooms where these people sewed and lived, if you can call it that, was eye opening. My own grandfather was born to a German immigrant in 1898. My great grandfather, a vain martinet, accordng to family legend, at least had the sense to get the hell out of New York City after he got off the boat. He managed to procure a farm upstate and to marry an American woman. While I am sure that farm life in the Catskills presented its own difficulties, at least the risk of TB was greatly lessened and my grandfather and his brothers and sisters didn't have to share the backyard privy with 20 other families.

13. Back to the hotel and the train station. As we round up the bags, I see I have no train ticket. It must have blown away on Friday! Well, ignorance was bliss. Surely Amtrak will replace it? One need only wait in a long line to get the answer. The answer is, "No." A man with a defeated air and long fingers looked at his computer screen in the dull fluorescent light of Penn Station and informed me, in rather an embarrassed fashion, that "Amtrak policy is to make you buy another ticket if you lose one." Bastards.

14. The train was packed and I irked a guy who was getting ready to sit down by telling him I was planning on sitting in that seat. Sorry! But two days in New York had made me pushy. Also, I was trying to stay near the Understudy, since we couldn't sit together. Good thing too, as a strange man approached her seat a few minutes into the journey and tried to say her seat was his. The woman sitting next to the Understudy said he hadn't been sitting there before we boarded so I told her to stay put. This kind of thing doesn't happen in Vermont...

Glad to have gone. Glad to be home. 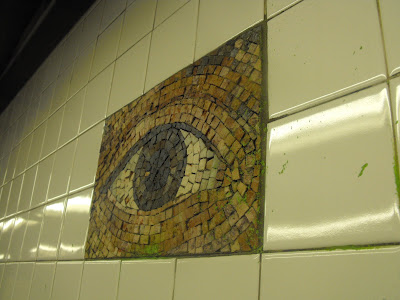