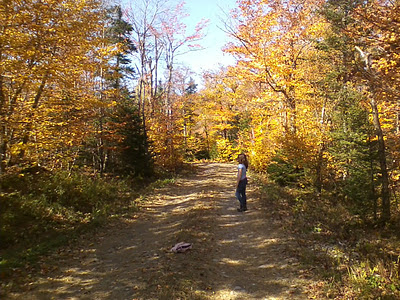 This is the Understudy walking around the woods at Jay Peak after she survived being ordered out of the car to take the picture in the banner today and the one below. 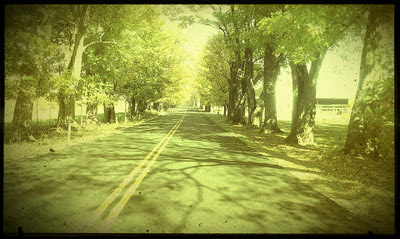 I made the Understudy hop out of the ancient Camry today to take some pictures of the leaves on North Hill in Westfield, Vermont. These particular leaves leaves adorn a lines of ancient maples that someone planted on both sides of the road at least a hundred years ago. Every spring someone hangs sap buckets from them.

The weather here in Vermont this weekend was like something ordered from the Southern California weather catalog. Also it is Columbus Day weekend and Canadian Thanksgiving which produced of perfect storm of Vermont tourism. I do believe that every human being with a motorcycle or a classic car for three states and two provinces around was driving in Vermont. So,adding to the fun for our little photo shoot was the frisson of cheating death by tourist. Well, at least the Understudy could claim that thrill. My fun was only in ordering my little teenager out of the car to take pictures while I stopped in the middle of the road with the flashers on. The back story here is that she got a smart phone this weekend (two and a half hours of the the four of us consulting with "Parker" at the Verizon store) which is at the pinnacle of smart phone-ness. So ... she had the good camera. (The rest of us got new phones too but ours are carved out of stone because we could only afford one really good one and guess which 13-year-old girl in the family had to have that.)