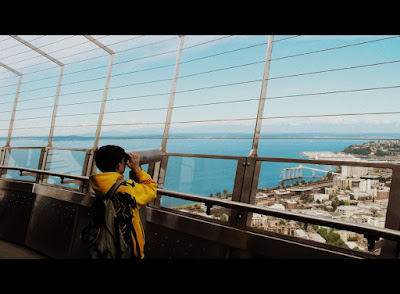 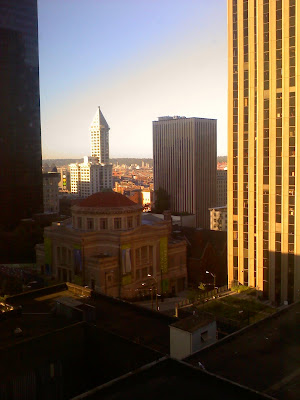 Whew. It was a long night flight from NYC yesterday, but here we are, at last, on the western edge of the country. It is lovely here - I had forgotten what that Pacific light does to everything. Seattle, you'll recall, is the jumping-off point for the Alaska cruise I threatened to tell you about a few weeks ago. The boat leaves tomorrow.

We had a Seattle day today and ran around town checking off the sights. The closer we got to the waterfront, the less Shack liked it. Pike Place Market was mobbed but I wanted badly to see it. Shack claimed it made him sick (there were some beggars and - quel horreur - people smoking cigarettes. He is not used to such sights - he'll kill a thousand aliens before breakfast on "Halo" but a guy sitting by a sign asking for spare change reduces him to a jelly). We had to leave eeeemediately.

And, dear internet, though I could not possibly overestimate your interest in my vacation I will be back with more later. 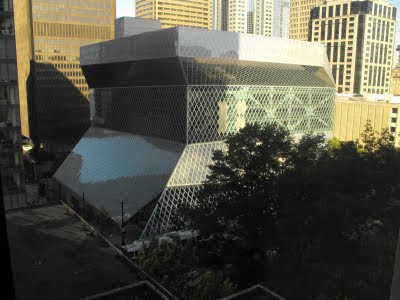 (This is the Seattle Public Library. I read an article about it in the New Yorker some years ago when it was first opened (it was designed by uber cool architect Rem Koolhaas) so I was sort of excited to find that our Priceline hotel room has this great view of it). Bye for now.
Posted by Kim Velk at 7:09 PM 5 comments: