The National Gallery of Art & Paul Mellon & Me 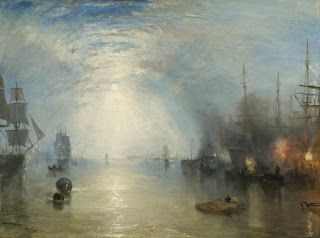 Strange though it may sound, on this day alone in the Last House I managed to do a half decent job cleaning the kitchen while also viewing a film on my iPod. This wouldn't be possible with most movies, but this one was made last year under the auspices of the National Gallery of Art in tribute to Paul Mellon and it is mostly made up of still pictures. The pictures are of the life, times and masterpieces of art collected by the Mellon family, with narration of a text written by PM (though not read by him). That is to say, the pace is sufficiently leisurely that you don't need to look at the screen every second. You can clean a sink and watch a family photo or a masterpiece by Reynolds flit by. That isn't to say it was boring. Coming so close on my finishing listening to The House of Mirth, I seem to be continuing in the gilded age. I downloaded the film as part of my quest for free material for my iPod. It's amazing what the National Gallery has available at its website. I'll post a link. All the great museums of the word are doing the same and isn't that mindblowing in a fabulous way?

Anyway, back to Mellon. I am a little surprised to say that, although the film dwelled a bit too long on his race horsing career (buyer and breeder thereof), it was a moving sort of documentary. Mellon is dead (he died in 1999) and though I have been to the National Gallery a few times and knew his connection vaguely, I didn't know much of anything about him. His claim to fame was that he was the Son of a Very Rich Man. It was surprisingly interesting to hear from him what he made of this position.

He clearly recognized the strangeness of his place in the world and yet, made a good thing of it. He used his wealth to enjoy himself and indulge his passions, but the passions were informed and intelligent and (aside from the racing) did much to benefit his fellow Americans. He was also drawn to British art, sports, country life. I, as you few faithful readers know, have the same interest - although it plays itself out in a less fabulous fashion here at the last house. (No masterpieces or throughbreds anywhere in sight). So, though I am not a Mellon, I feel him to be a kind of kindred spirit if not, unfortunately, an actual blood relative.

This film celebrates the spirit and philosophy of Paul Mellon. The narration is comprised of his own words drawn from interviews, speeches and a variety of writings. He takes us on a gentle journey into his passions and interests in life including family, art, collecting, horses, and racing. The film captures the gentle nature and wisdom of an extraordinary man.

I take my hat off to the NGA for producing this, now that there is no point in sucking up to the benefactor.

Back down here on planet earth, the sun is shining beautifully today though it is very cold for March. I drove the kids to Morrisville this AM in the Camry (15 years old 216,000 miles and no snow tires - proof of the distance between the Mellon family and yours truly, if any were needed). The weather forecast yesterday had been for dry cold weather over night. Wrong. We spent the last 20 miles of the trip on roads on which one might have skated. Kids were 1/2 hour late to school. Almost time to go get them again. Yikes.
Posted by Kim Velk at 12:46 PM 3 comments: