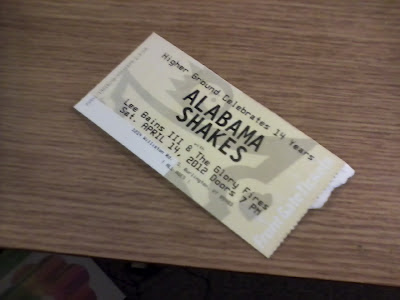 You know how I have been going on and on about this band, Alabama Shakes? Well, I went with some friends to see them tonight at Higher Ground, a venue in Burlington not much larger than a church basement. I was sick (sore throat, fever, coughing, sneezing blah blah) and, are you sitting down? I don't go out to see a lot of rock bands.

Making matters worse, Higher Ground has no seats - this was an SRO situation. We got there about a half an hour after the doors opened. The opening band didn't appear for another hour. I had to flee to the Ladies partway through their set for a break from the noise a little sit down (I won't say "wee sit down" - oops). (Did I mention I don't go out to a lot of rock shows?) Then, when the opener cleared off, it was another long wait for the Shakes. As we shifted on our tired legs, I assured my friend that we could move back from the spot near the front we had cadged if it was too loud or people pressed in too close.

Well, from the moment the band strummed the first chord and dropped the first drum beat, I was theirs. Brittany Howard is the singer and it is not too much to say that she is touched by fire. She's the star, but the band is more than just her and more than the sum of its parts. And. Whoa. After hours on my fevered middle-aged-broad feet, I would have stood for hours more to hear them sing.

Here they are blowing David Letterman's mind earlier this week. See them live if you can.