You Are Repressed, But You're Remarkably Dressed 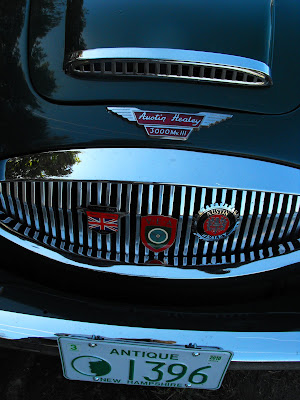 I didn't get any takers on the little challenge I set out at the end of the last post (from whence did I steal the title of that last post?) So, rather than keep you all in suspense for another minute, I am just going to tell you. It was from the Morrissey song on the Bona Drag album, "Hairdresser on Fire." This post title is another bit of lyric that sticks...

"Hairdresser on Fire" comes from the mid-career, post-Smiths, Morrissey ouevre, when he was still young and tormented. (I understand that lately he has settled a bit and might even have taken a stab at some form of romance).

There are a couple of live versions on Youtube, but I prefer to listen again to the one that plays in my head, from the days when Bona Drag was a regular in my car's CD rotation. Some fan painstakingly collected all these views of M and overlayed them on that familiar track, if you want to hear it for yourself.

Remember me to Sloane Square.

A little more follow up on the last post, keeping with our U.K. theme, I did make it to the British Invasion Car Show in Stowe last weekend. The best part of it was listening to the Beatles tribute band, "Britishmania" (not to be confused with Beatlesmania (TM)). They played at a block party on Stowe's lovely Main Street on Friday night. The kids danced. I bobbed my head and sang along and watched the other people in the audience - New England types who did not want to get too close to the stage and who also limited their display of interest to headbobbing and singing along. Late in the evening (like, 8:30) a few people migrated out of the beer cage (it was a very well-regulated event and beer was sold only in a small area enclosed by snow fencing) and some of those people moved their legs and arms a bit and shouted requests. We all sang "Yellow Submarine" together and bonded.

Adding to the festive atmosphere were all these fabulous old Jaguars and MGs and Minis and Sprites and even a Rolls or two that were parked up and down the street which was otherwise closed to traffic.

On Sunday, the Understudy and I went up to the show field and caught the tail end of the main show. Well, mostly we shopped feverishly in the goods tent as the vendors were packing up all around us. You'll be relieved to hear, I am sure, that we we were able to buy a bunch of things emblazoned with Union Jacks, albeit under pressure. We also got to see at least a few cars and I managed a few photos (above and below). These pictures don't do the cars justice because we had to hurry and also because it was too sunny and bright to get the romance of the things. Still, here ya go. 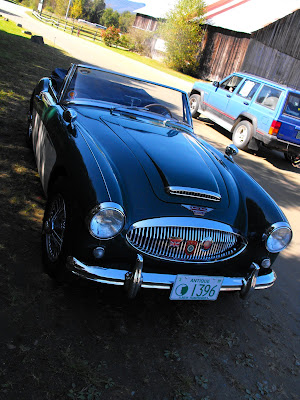 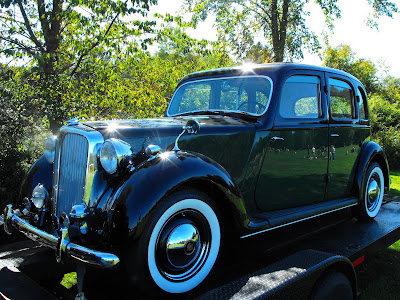 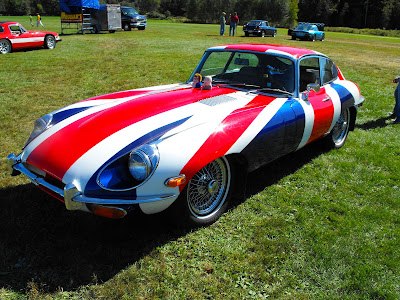 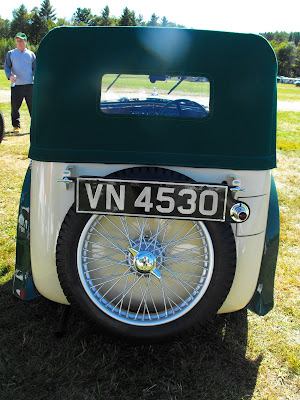