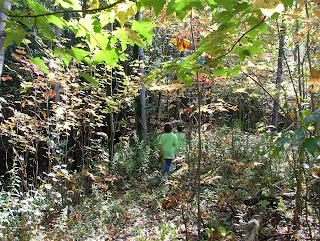 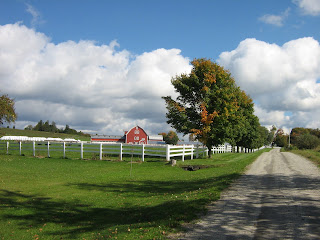 Our California-beautiful weather continues. Two weekends in a row of spectacular Northern New England fall. The friends we visited last weekend over in Derby, VT returned our visit yesterday (admittedly, it rained yesterday but it was sort of nice and made everything very fresh for this morning).

I slept in (til 8 AM) and went for a walk on Jay Peak this morning. I couldn't find my camera first thing so I didn't get to take any pictures. I suppose Jay Peak subjects are getting a little wearisome anyway. Suffice it to say that even though I didn't even get to the half way point on the mountain (it is way steeper than it looks from the road when you are on foot on its sides) the scenery below was beyond words. After picking my way donw in the way of a middle aged fat woman, I stopped bythe Jay Peak craft fair that is going on today. I avoided eyecontact with most of the vendors (fleece hats, bad paintings, maple syrup, fudge, signs that say "Moose" and "I Love Skiing" - the best "art" was on offer from a sullen looking guy for Woolcott who had some beautifully worked stone pieces along with the kitcshy "Believe" and "My Garden" inscribed stones). I bought a jar of hot pickles from a lady from Alburgh who has a very impressive collection of canned goods for sale. I bought something from her last year as well - can't think what. Corn relish maybe?
Robertson Davies, a famous Canadian writer whose book Fifth Business we had to read for Can. Lit. long ago (a book I much admired and still think of often), wrote an essay once suggesting that diarists should record the simple facts of every day living. Davies advised that these are the things that are of the most interest to future generations. How much things cost; a regular day at home or at work, this is what the future wants to know. So, in that spirit I'll record that this jar of Vermont grown and canned pickles cost $7. Not unfair. A supermarket jar probably would cost $2 but it wouldn't have been handed over the counter to me by the lady who grew and and canned the stuff at a farm about an hour and 15 minutes from here. There's this growing movement, esp. in Vermont, for people to eat stuff that comes from close to home. When the organic farmer who rents our land first talked to me about that it seemed like the usual hippy claptrap. I find my sympathy for the idea growing. I'd like to get a few farm animals for our own little family next spring, and a bee hive. Note to self..
Here are a couple of pictures to provide evidence of the beauty that has been ours here on the Quebec/Vermont border: the first one is by my friend, Brenda, that she took last week while we were out for a walk with our kids near her place and one I took not half an hour ago in the woods here at the last house.
Posted by Kim Velk at 12:31 PM No comments: