Which Character Would You Be In the WIzard of Oz?

Shackleton's fifth grade class presented it last night. When I found out they were putting it on I told him he ought to be a flying monkey." He said, "Why does everybody say that?"

Actually, he was eventually cast as the coroner. You remember: (sing it in your best Munchkin voice!) "As coroner I must aver I thoroughly examined her, and she's not merely dead, she's really quite sincerely dead."

Shack had curlicue sideburns and wore a hat with a wide brim and a long brown coat. It was too dark in the theater to take pictures - we actually got to use the town theater (which had upholstered chairs and air conditioning, more than making up for the poor photo situation). Here he is having a post-performance creemee: 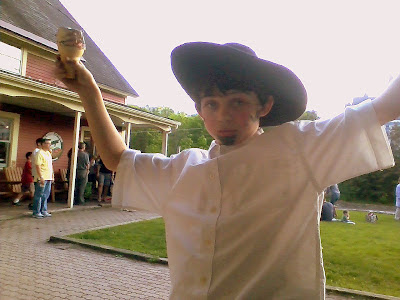 I think he stole the show, but that's just me, and his teacher, and his former teacher and, like, ten other people talking.

There's actually a web page of memorable quotations from the Wizard of Oz. (Oh, internet, you have anticipated my every musing!). My favorite:

Auntie Em: Now you go feed those hogs before they worry themselves into anemia!

I am afraid there would only be one role for me in the show and you've probably guessed it..

That's my motto! (We've got another blog post coming with helpful tips on how to tell good people from bad people in movies and stories, stay tuned!)
How about you? Where would the casting director put you?
Posted by Kim Velk at 10:08 PM 2 comments: