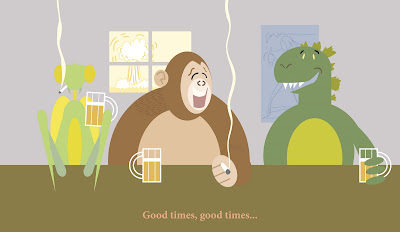 As you know, if you have been following along, the adorable Shackleton, who just turned 8, is having trouble learning to read, despite the fact that he is a kind of genius. (Well, I am his mother). He is now getting special instruction six hours a week from a group of expert tutors near Burlington. It seems to be working...

They send him home after every session with little books that he is supposed to read and return. Because he seems to be having a particularly bad time keeping his short vowel sounds straight, the books he's assigned tend to be dramatically limited. This week, he came home with "Ben the Bug." He did a good job reading it to us, but after sitting through it once I thought I would try a little rewrite, to introduce a little more vocabulary and a few other concepts.

If you have a short-vowel challenged reader in your life, feel free to use this. Publishers interested in acquiring the rights can email me. I'll make you a deal. The Understudy is at work now on illustrations. If those come out good, maybe I'll post scans...


Ben saw a hat. It belonged to a man.


Ben cut a hole in the hat with a pin. He made the hat a hut!


Ben liked his hat hut. It was big.


When the man got back, he was not mad, but he wanted his hat back.


But Ben said, “No thanks! That can is hot and it smells bad. I want the hat!”

The man said “No! That is my hat. Sod off, Ben!” Then the mad man tried to hit Ben with a pot.

Ben left fast. He went to the beach.


Ben sat on the sand. The beach was hot and dull!


Ben asked the thin man for a cigarette.


Ben had the hot dog. But he still wanted a cigarette.