Land That I Love

Hi team.  Just stopping in to say happy Glorious Fourth to all my countrymen.

I have been away in Western New York for a few days catching up, at last, with many of my favorite relatives at the ol' family farm (settled by our crew 60 years ago this year).  Eating potato salad with them in my uncle's garage (repurposed into a kind of church hall for the reunion), general visiting, walking through the woods and fields at the old farm, admiring how beautifully the young people have grown, and how beautifully the older ones have aged, had me feeling pretty good about life in this country already. 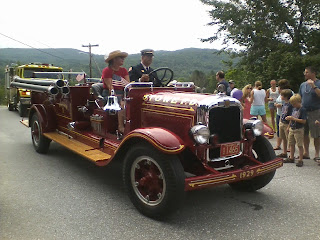 Then, this morning I kicked off the Fourth by attending the parade in Moscow, VT, a hamlet within the town of Stowe.  Nothing fancy - the usual fire trucks, a horse who features in every town event, some old cars etc., but also displaying a real sense of humor.

In addition to the lawnmower parade (see above), we got the Moscow Ladies' Lawnchair Brigade (women carrying lawnchairs) and the Moscow Mens' Radio Band (talented wearers of t-shirts printed with the band name and carriers of portable radios).  Someone had been to UPS and printed up a banner announcing that Moscow was offering asylum to Edward Snowden.  The banner was followed by a crowd and I think someone in the group was supposed to represent Snowden - he was trailed by G-men in suits, sunglasses, and earpieces. (I was too slow with my camera phone to get a picture, sorry).

I got quite teary about it as I walked the half mile down the dirt road where I'd had to park my car.  The thing that people often miss about the true greatness of this country is the general decency, the openness, and the kindness of our people.  It shines out at me most at times when no one is trying to make any kind of  a point.  So easy to miss it in all the debate that we seem to go in for and the general braying of the news but as prevalent and real as the air we breathe.  Happy Independence Day!  What a country it is.
Posted by Kim Velk at 12:49 PM No comments: