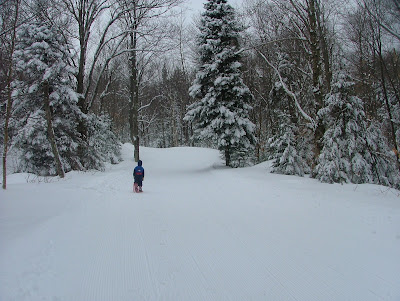 More snow on the Vermont/Quebec border this New Year's Day. The Woolfoot family spent New Year's Eve in typical style - at home and in bed by 9:30. I guess it would have been nice to have been invited to a party... Oh well. It was snowing New Year's Eve and I am developing a dread of driving on snowy roads.

We braved them this morning however. I got the kids up and dressed and the three of us went off to Jay Peak for a little family snow shoeing. It was idyllic back there.
After some hot chocolate and four-dollar Ben & Jerry ice cream bars in the Jay Peak cafeteria we went down to my beloved Degre Auction House in Westfield, Vermont. The kids were wonderful, ensconced on an old couch they let me watch the proceedings for about two hours. $250 later, I was the owner of two old prints and a complete set of the works of Charles Dickens. Then it was off to Newport to get some stuffed animals (a reward) and groceries. The Hallmark store was closed, to the deep disappointment of Kid 1. Wendy's burgers were on the menu and a quick trip to RJs Friendly Market, then home. Not a bad New Year's Day. Woolfoot husband saved the salmon that was nearly incinerated under the broiler, and, here I am with my report. I'll try to post a little video. Best wishes to all.
P.S. More Woolfoot Reviews and Cosumer Guidance:
I see I promised back on December 16 to tell you what I thought of the soundtrack to The Golden Compass movie. I like it a lot - esp. Kate Bush's single. Of course, she can hardly do any wrong as far as I'm concerned, but I never give anybody a pass. Kids and I saw the movie in Montreal this week. A near-hopeless muddle, as must be expected given the complexity of the story. I enjoyed it anyway because it had been so beautifully realized - and because the girl playing Lyra was really great.
On this point of "realization," the French have a phrase for "producer," (I think): "Réalisateur" - the one who makes a thing out of the idea. I have observed that many mega-budget movies seem to have some brilliant realizers, who design costumes, create effects, choose locations, light scenes, what have you. They are so wonderful in the Harry Potter movies and in TGC - they made the books "real" - but the stories don't live up to their gorgeousness. I guess that's the problem of the writer and director.
Posted by Kim Velk at 6:43 PM No comments: