Seven Wonders of Me 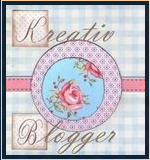 Once, I won a "New York Quebec Scholars Award" (or something like that, it was a long time ago). My friend Eugene won it too, actually, I think he won it first and then when he left the program, they gave it to me. Anyway, Gene told me that when he opened the envelope announcing his prize, he read the first line, which said, 'although there is no monetary aspect to this award..." and never finished reading it.

Well, that's where Gene and I differed. I left that crap award on my resume FOR YEARS. And still today, I am happy to win ANYTHING so thanks Deborah, the Muse in Kansas, for picking me as one of those to whom she is passing on the "Kreativ Blogger" award (not to be confused with the "fonetic speller" blogger award). I am supposed to tell seven interesting things about myself and then pass the award onto 7 others. I suppose if these things circulate long enough, everyone will get one but, no matter. As I say I am happy to be singled out for any bit of praise; "I like your bracelet" practically makes my day, so I am running with this.

I am uneasy about the pay if forward aspect, however, because 1.) I would probably offend someone whom I admire by leaving them out (all the blogs I visit are under "favored ones" on the sidebar and all have wonderful aspects; 2.) I know some people, probably strange, successful people who win things all the time, don't want to receive such honors and 3.) I am worried that if I picked out seven bloggers whom I admire, several of them might not be willing descend here to pick up their graphic - and then I would feel like a loser, even though I just "won". So, thanks Deborah. You would be one of my seven if I were willing to name them. All you other bloggers, if I have ever left more than one comment on your blog, you may also regard yourself as a winner in my book. So write seven things on your space if you feel so moved and I will come read them and comment.

Here are the seven things about me. You tell me if they are interesting.

2.) My dad is a science genius, isn't that interesting? When I was nine, although he already had his PhD in physics, he became intrigued by human physiology and went back to medical school. He got his MD while continuing to work part-time as a research scientist. He worked as an ER doc for some time after he finished his internship without ever having left his day job. He is one of the guys who figured out Magnetic Resonance Imaging back in the 70s. He also got divorced from my mother (Quel surprise, as they say in France and Quebec, more on that at number 4 below).

3.) My husband (much older than me) is an arch conservative economist who appears frequently on Canadian television and radio. He can be counted on to say things about free markets, Sarah Palin etc. that send most, normal, nice, liberal pink-blooded Canadians into fantods. He is very nice to his friends. Don't ask about his enemies (please).

4.) I spent most of my 20s living in Montreal with the plan that I would learn French. It didn't work.

5.) I went to law school in Montreal because I wanted to go back to Montreal (where I went to college) and I was no good at math or science (despite my parentage) and so was unfit for any form of additional education. And, yes, if you study the common law, even in Montreal, you may be allowed to sit for the bar exams of New York and Vermont, which I did waaaaay back when I had a lot more energy. (I couldn't have stayed and worked in Quebec because of aforesaid inability to actually speak French).

6.) I have an unaccountable interest in England and things English. But you knew that already.

7.) There's a book I am supposed to be writing.

Oh. I feel cheap. Am I bragging or overexposed? Yes and yes. But that was fun.
Posted by Kim Velk at 5:46 PM 8 comments: