Consider the blue and white... 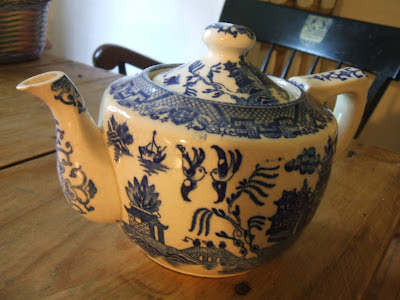 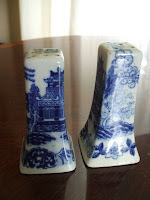 At the risk of boring rigid those who have no interest in blue and white china I am continuing on that theme today. Before you flee (and at the risk of sounding like a pretentious ass), give me a paragraph to argue that there is something really profound about our plates and cups. How about this: these old bits of porcelain and clay distill civilization in a place setting, or even in a creamer.

First, there's the technology to consider - developed by the Chinese and the Dutch and brought to the world by them and by the English. The potters were like alchemists. They figured out which clays, which glazes which ingredients and processes would turn dirt into art. They saved our ancestors from wooden utensils and all that goes with a life where you have to eat out of a wooden bowl with a wooden spoon. Where there is porcelain, or even ironstone, can manners, enlightenment and learning be far behind?

And, as I said here when we were discussing teacups back in April, the art involved in fashioning and decorating these things over the centuries, the thousands of artists and artisans, known and unknown, who have turned their hands to them makes them worthy of our regard.

OK - if you still aren't going for that then at least admit they are pretty, or easy on the eyes.

Above are a couple of new acquisitions from the auction this weekend. It is the time-honored blue willow pattern. There is so much blue willow out there that it must seem to those who have manufactured it over the last 200 years that entire continents can rest on it. It was actually invented in England, by an English potter and engraver for Mintons. The Chinese copied it! These pieces are both marked "Japan" and I think they date from the teens or 20s.

They aren't perfect, which brings me to another point: when it comes to these servicable old pieces, perfection is overrated.

I have been told that no collector wants any piece of pottery with the slightest flaw, but they aren't counting me as a collector. Below are a trio of saucers I picked up at my favorite antique store, M. Lewis in Waterbury, Vermont. They are Wedgewood in the Ferrara pattern. M. Lewis had just these three little saucers. Each one is chipped. The color was so deep and dark, and, as far as I was concerned the chips added to the sense of age that they convey. At $5 apiece I was happy to bring them home. I have them in my most prominent display location in the house. 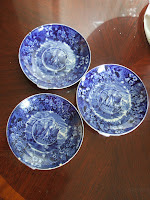 On this pont of perfection, the Japanese have this useful notion of wabi-sabi, which I have always understood to mean the flaws in beautiful things that somehow make them more beautiful. Checking the definition now I am informed this is crude Western translation. I found this fuller explanation of the concept just now:

Westerners tend to associate wabi sabi with physical characteristics - imperfection, crudeness, an aged and weathered look, etc. Although wabi sabi may encompass these qualities, these characteristics are neither sufficient nor adequate to convey the essence of the concept. Wabi sabi is not rigidly attached to a list of physical traits. Rather, it is a profound aesthetic consciousness that transcends appearance. It can be felt but rarely verbalized, much less defined. Defining wabi sabi in physical terms is like explaining the taste of a piece of chocolate by its shape and color to someone who has never tasted it. As long as one focuses on the physical, one is doomed to see only the back side of the brocade, while its real beauty remains hidden. In order to see its true essence, one must look beyond the apparent, one must look within.

Well, Grasshoppa, this is a deep blog post, isn't it? Anyway these little chips and dings don't make the plates better, but they make them "real" - objects with a history of function and this makes them in their way even more beautiful. (You can read more on the wabi-sabi web page from whence the above was culled.)

Here are a couple other recent auction acquisitions. The bowl is Dutch; turn of the century and stained and chipped. The pattern is called "Abbey." It looks great. I have it sitting on a dinner plate, genuine flow blue, where the cobalt ran during the firing resulting in this fuzzy image, not merely transfer printed. It is much stained, chipped and utensil marked and dates from the 1840s. 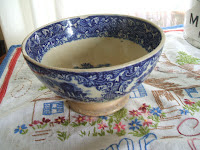 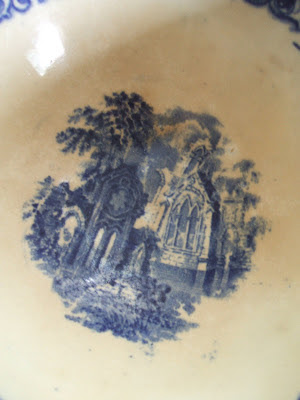 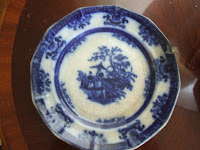 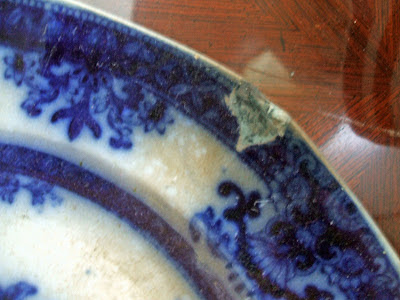 Finally, and let's have no juvenile snickering at this, but here's my collection of porcelain balls. Hey - I said no snickering! I picked them up about a year ago at the Christmas Tree Shoppe. I've written about that place before. It has not much to do with Christmas Trees, but it is a liquidator of all kinds of merchandise, some of it decent quality, most of it kind of dodgy, but cheap. These were a dollar each, made in China like everything else, naturally. But at least dishes made in China have a history. Not that I was thinking about this when the kids and I scooped up these. They liked them too and I could not resist. This little collection has been sitting in a clear glass bowl from the high-end Vermont glass maker, Simon Pearce, at the center of our dining room table for more than a year. Every time a guest says something nice about them I tell how cheap they were.

Maybe a hundred years from now some other middle-aged broad will have scored them from an auction and will be sitting around thinking kind thoughts of the person who must have bought them to decorate her table so long ago... 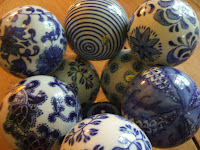