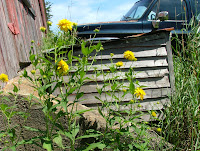 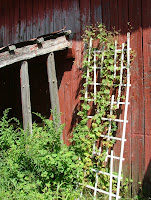 A couple of weekends every year, we get perfect weather. This was one of them. A stay-at-home North Troy weekend. Twice up to the Mountain: once for a picnic with a ski group and this morning for a walk in my beloved Jay Woods. The wild flowers are unspeakably beautiful. Here are a couple of pictures from around the last house.
By the by, kids and I saw the Simpsons Movie at the Newport Waterfront Cinemas last weekend. I liked it, but it wasn't as good as the best episodes of the show. Odd thing was that the power in the theatre went off just at the moment when Mr. Burns was facing the delegation that was asking him to provide power to the town. His bony finger was poised over the two buttons - one that was labeled "Release the Hounds" and one labled "Power" (or something like that). Then, the movie went off and we all sat there wondering if it was part of the movie. It would have been sort of brilliant if it had been. Then the manager came in and told us there had been a power failure.
Kids gave it two thumbs up.
Posted by Kim Velk at 4:21 PM No comments: