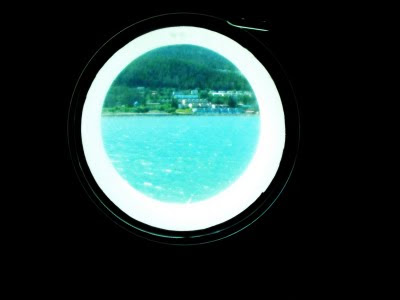 Hey - anybody out there? Breaking news: We're back in Seattle at an airport hotel that FINALLY offers up some free internet. Bless them. We are having a proper internet wallow tonight after a week of deprivation at sea. I couldn't connect the night I wrote this (more on that below) but now I will be catching things up a bit. One more day in the northwest, on land, then back to Vermont. Today's banner is a shot I took (then messed with) in the White Pass on the way to Yukon Territory.

First, let me say that it is after 10 PM and it is still light, as I can see through the porthole in this cabin.

I was too poor for a proper window and too claustrophobic for an inside cabin, so Shack and I are down here on what amounts (almost) to the bottom floor – just above sea level.

This cruise to Alaska aboard the Norwegian Pearl was one of several ideas we considered for a big trip, in recognition of Shack’s having achieved 10 years. France and England were other contenders. He is happy with his choice (did I mention about the bottomless self-serve soft-serve?) but I am pining for some old city – Paris or London would have done nicely. I am not cut out for this kind of thing.

My heart sank when I got on board and was greeted by a pretty blond girl in a strapless knee-length red dress. Are we going for 1890s saloon here, I wondered, or is this just what the average cruiser expects by way of elegance? I mean, I am as fat and badly dressed as the rest of the crowd on board – well, not quite as badly dressed since I had sleeves - but I mean, really.

The décor in the reception area was apparently the result of a collaboration between Donald Trump and My Little Pony. I can hear it now:

Svend: "Pony, Donald, what we need in the reception area is something that will really blow their clogs off. Something elegant, like Vegas, and refined - like a high-end Bangkok brothel - but also something that will delight the eight-year-old girls and NASCAR fans we're expecting."


Well, really, you say, what were you expecting? It’s a cruise. Duh.

True -- but, in my defense, since the cruise line is Scandinavian, I suppose I was expecting some teak or something Danish-y. A little restraint. And since it was destination Alaska I thought there’d be a lot of outdoorsy types. Wrong and wrong.

OK – Maybe I am being an bit harsh. Here’s what I like so far. I like our cabin. It has that cunning way of a ship in using the limited space to maximum advantage. I like the fittings of the ship itself – our porthole is like a manhole cover – solid and no corners cut. The decks are scrupulously cleaned and all the railings and every lick of paint is perfect. (I suppose, before they got around to upholstering banquettes and the bottom of the silver columns in the reception area with pink and turquoise, they had to build something that would not try to cheat the ocean). Today, also, I liked the view. We got to see the coast of British Columbia and it was gorgeous. We both like the shuffleboard – that oldest, lowest tech cruise pass time.

I will post this once I get some free wireless Internet somewhere. I did go online for 12 minutes today. I know because when I signed off I got a message about the $12.95 that I had spent for checking my email and saying hello to the Understudy. But that (the ceaseless merchandising and chiseling on board) is another story…. More later.
Posted by Kim Velk at 1:33 AM 4 comments: