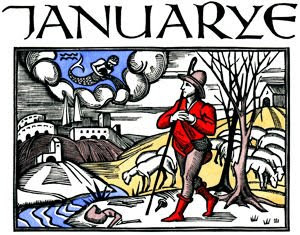 The old life odometer tipped over to "44" this last weekend. How'd that happen? The big day got started at the auction where I bought some chipped Haviland china ($5 -for 4 dessert plates and a sugar bowl) and a great little collection of Jackie-Kennedy-Era hats in period hatbox from Bambergers Department Store ($22.50).

The box is black and decorated with little gold Fleurs de Lis. The lid is black and white stripes with "Bambergers" written in jaunty gold script. My long association with Quebec, and strange royalist tendencies, pull me toward anything decorated with Fleurs de Lis. I think the hats will look smashing on the Understudy. I forced her to model the best one just now by threatening to give Shackleton the entirety of the last Fruit Roll-Up unless she went up and got that hat and put - it - on! The crappy picture was predictable. We'll have to do better on some later occasion. Still, you get a notion of how fabulous this hat is and of the wonders of the hatbox from whence it emerged. 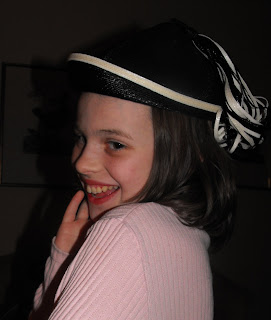 After the auction it was off to Stowe for the kids' ski lesson. There were ice sculptures everywhere. Fabulous. Cold and windy, but fabulous. Whusband made a pie. I bought myself flowers at Price Chopper left over from Chinese New Year. They are still on the table. My sister and nieces sent me a card that arrived on Saturday with a $50 Target gift card.

So, I am not complaining. How could I? Well, there is the fact that I have the sense that I am falling apart like a cheap suit these days. Mortality! The Center Cannot hold, and all that. But then I got to thinking...

This birthday coincided roughly with my receipt of a book put together by some stalwarts from my high school class on the occasion of the 25th anniversary of our graduation from High School. I didn't go to the reunion, which took place last summer, but I bought the book.

Does anything make more fascinating reading than the bios, 25 years on, of the people with whom you went to high school? And are any illustrations more interesting than the pictures of the same? I sent in a little self-serving item like around 20 percent of our class, which consisted of about 350 people.

We were each of us reared in a prosperous suburb of Schenectady, New York. Schenectady was, and is, a high tech kind of place, at least vestigially, because of the presence of GE. It's R&D center was located in our "town" (no town center, really, to speak of, mostly housing developments within striking distance of the lab).

Our High School was a bragging point for most of the adults in our lives. People moved to our town to send their kids to this great school. I didn't believe this propaganda then, but I guess I do now. Lots of bios seem to mention "Yale" and similar institutions. Funny, people I assumed were miserable in High School seem to be largely responsible for all this rounding up of and organizing of the alumni. Could it be that I still don't know everything?

Most of those who provided recent pictures, or who allowed photographs to be taken at the reunion, have held up pretty well. Some look astonishingly good - better than they did at 18. I am not in that group. Others look, well, like strange old people. I am closer to this group. Then there is a third group, memorialized on a single page, who are dead. Whew. That's what had me thinking along the lines of Job, from whose book I have paraphrased today's post title.

There are five altogether out of our class of 350 (or so) who didn't make it into their early 40s. One - and I remember this well - didn't even make it to the high school. She died in 7th grade in a car crash. She was too cool to be my friend but she had come to my birthday party in 6th grade. Her name is etched in memory. I had heard about two others who were dead before we got out of college. Two others are on that page whom I don't much remember and whose fates were unknown to me until I got the book.

In the last year or so my sister dredged a bunch of our high school stuff out of the house in which we used to live. It included a picture of me being handed my high school diploma by the assistant principal, Mr. Carangelo, on the stage at Proctor's Theatre in Schenectady. I am grinning like an embarrassed idiot. It looks like my mortar board is a heartbeat from slipping off my head. I am wearing the gown in a shade of red no longer available in the United States and made of a petroleum based product, as I recall. I don't remember much about the ceremony, although I do remember sitting with all 350-whatever of us in the dark: jocks, nerds, drama fags (sorry but that was the affectionate sobriquet) we didn't have goths yet, all in alphabetical order, ready to be loosed on our lives and the world.

Pondering this I was glad that the Grim Reaper wasn't actually visible up on stage with Mr. Carangelo, letting us know the odds. Two of you will not make it out of your 20s, 2 more will not see 40. What news next? Always the same, I suppose. But in the meantime, there are adorable models for vintage hats,
and the hats and their boxes,
and skiing, and ice sculptures,
and discount Chinese New Year flowers ,
and apple pies,
and Target, and gift cards to Target!

And for that, and so many other things, let those of us who have escaped to tell be grateful.

Did you hear about the weather up here today? My kind neighbor drove my kids to school (the snow didn't come til around brunch time so school wasn't cancelled). I used an hour or two of the morning for a slow hike, befitting my semi-collapsed state - in my beloved woods at Jay Peak.

In all this snow, a creek rock becomes muffin-like, with strata of different snow falls clearly visible. 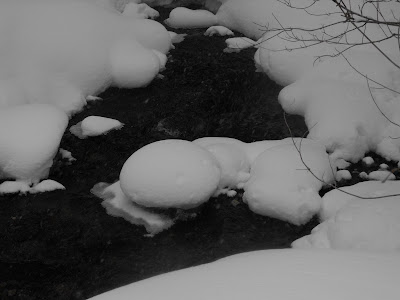 And here's the Family Conveyance, as it appeared today after my trip up Jay Peak then to the Pick & Shovel and RJ's Friendly Market in Newport. 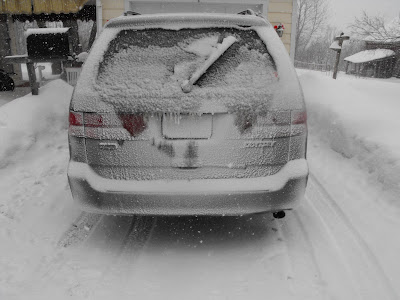 I actually love all this snow.
Posted by Kim Velk at 7:49 PM 5 comments: