Something New; Something Old; Summer's End 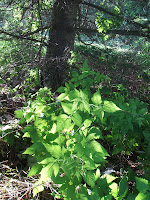 The last day of summer doesn't officially arrive until September 21, but, up here on the Canadian border, a few leaves on some stressed maples are already showing red and some of the ferns, lush green a week ago, are going brown. More drastic, the kids are going back to school tomorrow. Goodbye Summer 2008. Short, sweet and wet.

I went skipping around my corner of the blogiverse today and found that most of my frequent haunts have been lightly maintained of late. The same has been true here. The "something new" in today's title refers to this fresh post, the last one having gone stale almost as fast as a Montreal bagel, and some time ago. I assume that most of my favorite bloggers have been dealing with their lives away from the computer. Well, there is that whole child-rearing, family and friends visiting, earning a living business with which to deal. These distractions have occupied me nearly completely for the last week or two. Work, dentist appointments, school shopping, etc. Worse, we had a party here this weekend, and what a time-suck that was.

The point was partly to celebrate Whusband's achievement of a Great Age earlier this summer (the party had to wait because his birthday arrived while I was visiting my mother in Florida); and partly for a last hurrah before the school schedule enforces its discipline on all of us. We had about 20 people here last night to feed the mosquitoes. Poor things. (The people, not the mosquitoes.) Let me tell you, in case you didn't already know, but it is a deal of work getting a lawn party for 20. Oh, now I remember why we don't have big parties! I had part of a glass of red wine at about 6:30 PM. It often makes me sort of flushed; between that, 12 hours on my feet, 90 percent humidity and a sheen of bug spray, I looked and felt like an escaped mental patient. Still, everyone was as nice as pie and, who knows, now maybe we'll get invited some places. We have great leftovers too. The silver lining: salsa, chips, and vegetables already cut up into little bits.

This being my last blog post of the summer, I will go out with one more book-collecting note. This AM, while my company was sleeping in, I went out "for milk." Oh, and, uhm, I might swing by the auction too, I told the kids, quietly, away from the Whusband a/k/a BatEars.

Result, a half gallon of 2 percent and a box of kids' books from the 1940s. Alas, the library book sale season has ended for another year, and I am back to paying auction prices. Oh, and the Last House is chock-a-block with musty books from the basements and attics of my fellow Vermonters. I really have to stop buying books and plates, someone help me! But, this box, the box in question from today's auction, contained Mrs. Piggle-Wiggle, a first edition, and I happen to know that it is my mother's favorite children's book. She's getting it for Christmas.

The great fun for me of an auction box lot is getting it home and prowling through it for treasures. This lot contained a few others, besides Mrs. Piggle-Wiggle. Nothing with terribly great monetary value, although a few might get ten or twenty bucks on ebay on a good day. Some may head that direction. The great thing about them was, as usual, the covers and the illustrations. I think my favorites, on this basis, were two books about the "Teenie Weenies" by William Donahey. Until today, I knew nothing about these two-inch characters or their creator. Luckily, we all have Wikipedia now and here's some of what I learned:

William Donahey (19 October 1883 – 2 February 1970) was a U.S. cartoon artist and creator of the Teenie Weenies, a comic strip about two inch tall people living under a rosebush.[1][2] The strip appeared in the Chicago Tribune for over 50 years.[1][2] He drew the Teenie Weenies characters for a total of about 2100 strips. His work appeared in places all around the world.

The color illustrations were particularly fabulous. Does MOMA have this guy's stuff? they should.