The Northern Border and Some New Stuff 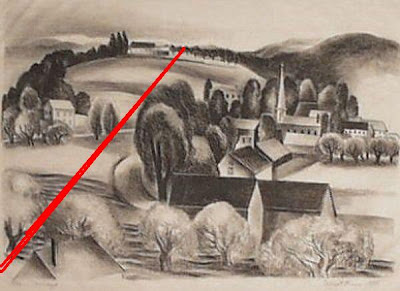 My friend Nan over at "Letters from a Hill Farm" (see the sidebar) tipped me off to a story in the March issue Yankee Magazine about the Quebec/New England Border. I finally nipped over to the Yankee website and read it. Now I am commending it to you all.

It's basically about how things have changed along that once-upon-a-time friendly border since that Very Bad Day, Sept. 11, 2001.

The border crossing in our little town, which is mentioned and described in some detail in the article, morphed from a little brick house with a portico to a massive, Stalinist excrescence. (Your tax dollars at work). The change has not been for the good, as the writer makes clear in a quiet way.

The border guards back in the day were usually men and women who had lived around the area for years. They knew who was who. When you pulled up at the station, they came out under the portico to eyeball you and ask a few questions and maybe even shoot the breeze a little. Now a guy from who-knows-where sits up behind bullet proof glass. He requires your passport, swipes it, types something into a computer (the lawyer in me really wants to know what but like everyone else I shut up and just answer the questions). As the Yankee writer notes, often these questions, at least for us standard, born-and-live-in-the-U.S. Americans, have to do with vegetables or meat you might have acquired in Canada. (Of course, America needs to be protected from Canadian meat and vegetables. It's horrifying the way the Canadians are dropping like flies from eating the food in their country). If you were born someplace other than the U.S. or Canada or Christendom generally (well, not counting Mexico or central or South America as Christendom) I can imagine things are much more difficult. My daughter's class trip to Montreal was delayed three hours at the U.S. border because there was a seventh grader from Mexico on the bus. The French teacher who arranged the trip told me that she had decided to stop taking kids into Canada.

Those of you from far, far away probably don't think much about the US/Canadian border, but when things at this border turn suspicious, wary, and nasty, you can believe that the tone in international airports and every other place where foreigners enter the country has probably suffered more. (Our English friends who own property here all have a horror story or two, about the Boston and New York airports as well as about crossing from Canada to the US).

I was hoping that with a new administration in Washington our leaders would shift their strategy from the "higher fences" approach and to old fashioned police work and intelligence-gathering to get the bad guys. No sign of this yet. I heard recently that the local border patrol was getting a bunch of new personnel.

Treating each visitor (and returning American) who presents himself at the border as a potential criminal should not be the default approach... It's pretty clear to me that we are despoiling what ought to be regarded as a national treasure (a friendly front door) and for no good reason.

Phew. I am glad I got that off my chest. Now let's get back to something of genuine public interest: my recent acquisitions. Here are a few items from my favorite antique store, M. Lewis in Waterbury, Vermont, to which I succumbed to this week. 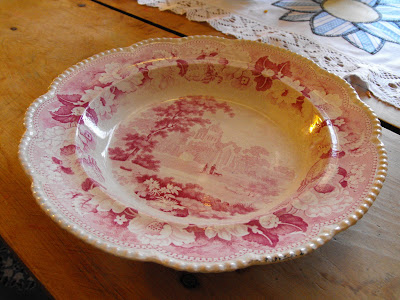 I have been eyeing this one for awhile. I actually wrote an email to a nice woman who is an expert in "English Pink" transferware for some advice on whether I should buy this. It has a crack... She gave me the advice I wanted and I followed it.

I had a good experience asking experts from the Transferware Collectors Club to swing by once before and identify patterns on old plates so I might do the same again. Any information would, of course, be gratefully received.

I am positive this is Staffordshire and I am just about certain it dates from the 1830s or '40s but I have no idea which potter made it or what the pattern is. 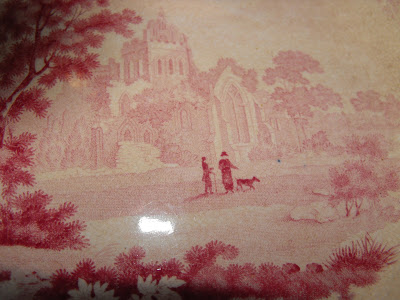 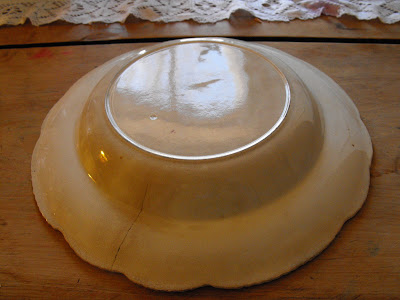 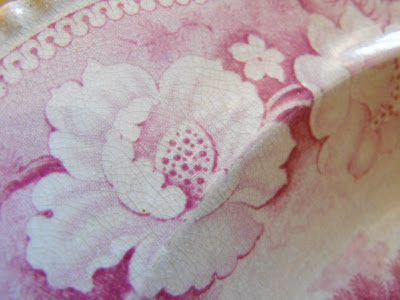 I bought this little, what? dish/bowl "dishbowl" and underplate because it was so unusual and the colors were so 1920s (I think). What is happening in this little scene? Bo peep meets two potential boyfriends? And what is it? The guy at M. Lewis who generally minds the store (he returned a glove to me that I left there a month or two ago... I am a known quantity) thought it was for butter. My office mate suggested it was for desserts. Any guesses? It's marked "Made in England" with a crown. No maker's name, unfortunately 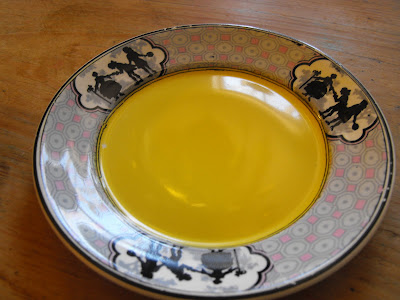 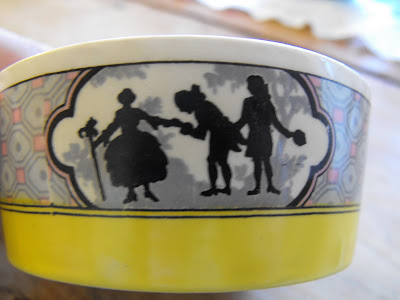 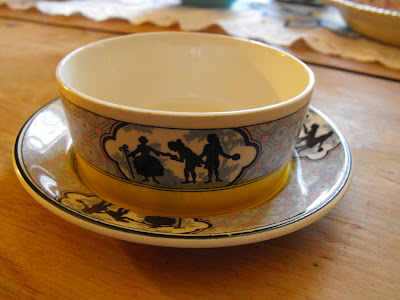 And last but not least, one more hat box. This one is truly fabulous. It is decorated with Paris monuments and the names of Paris hat designers, "milliners" I should say, from the 1950s: "Svend" "Achille" "Madame Paulette" etc. It is so echt 50s and French, how could I leave it in the shop? 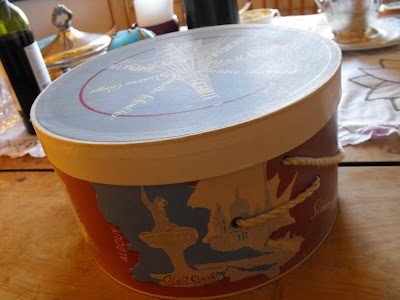 I did a little poking around the Internet and someone is selling something similar in an on-line antique shop as a relic of a long-ago Paris Fashion Week. C'est vraiment chic, n'est ce pas? I am glad whomever brought it back from France in the 1950s didn't have it grabbed by customs... 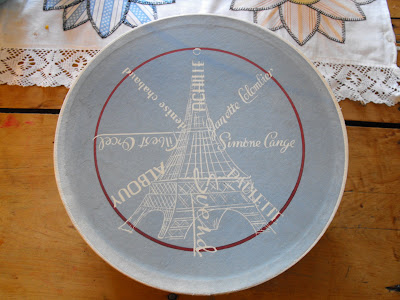