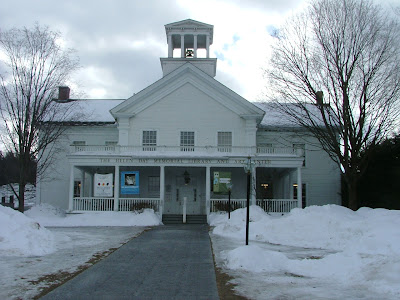 Stowe, As Revealed In The Library - Esp. the Volunteers

I paid ten dollars this fall as an out-of-towner to get privileges to borrow books from the Stowe Library. The building began life as the district school in 1863 and was used as the high school until 1973. Now it houses the library on the ground floor and the Helen Day Art Center upstairs. I love libraries. I have library cards in Newport, North Troy, Burlington and the University of Vermont (that one cost me $40 for the year). The one I use most now is Stowe. Partly this is because I have time on my hands when I am in Stowe. (I'm waiting for the kids' school day to finish before driving nearly the hour it takes to get back to the Last House). I also especially like this library because the librarians have a very pleasant way about them. Isn't it the case that the librarians set the tone for a library? They are almost always a pleasure to deal with although you run across the occasional lazy one or stickler for the rules - no overdue fine forgiven types.

I have been careful to return things to Stowe on time, but the once or twice when a DVD was a day overdue, no one asked me to pony up the dollar. In Stowe, they also have a lot of materials that I really want to access - books on CD, DVDs and all the best kids books. Everything about it is nice. I also find it interesting, sociologically speaking. Stowe, as anyone who lives in any part of the real (i.e, "poor") parts of Vermont, is a place apart, and this is revealed in its library - especially the volunteers.

There are, apparently, a contingent of older ladies (one or two men, perhaps) in Stowe who are seeking out opportunities to get out of the house in a purposeful manner. There is a dire need for volunteer labor in a lot of unpleasant places, guardians ad litem in child custody and abuse cases, for instance, jails, hospitals; but one needs a kind of vocation for that stuff (I don't know if I would have the stomach for it myself). Who can blame these ladies for choosing the library as the beneficiaries of their extra time? I get the sense, having observed one or two occasions of chit-chat across the circulation desk between a volunteer and a friend, that there is a network of these ladies who have made themselves available to the library. I am sure there are times when they are very useful - perhaps during the annual summer book sale when they can man the cash box on the front porch where all the books are.

What does it all mean? Stowe has a contingent of retirees who once lived somewhere else - "people from away" as the natives say. These are retirees of means. They read. Of course, there are nice older ladies all over Vermont, but the native (working) classes are not so likely to give their golden years to the library. They are mitten-tree knitters, fire house a auxiliary; they staff bingo at the VFW; they cook church suppers. Those with a literary bent might submit rhyming poetry to the local paper. The Stowe volunteers are a different breed.

I get the sense that there is a surplus of library volunteers in Stowe. My theory is that this is due, at least in part, as a fundraising strategy of the Board of Directors at the Stowe Library. In a former life, I worked in fundraising for a university and rounding up voulnteers for alumni events was step one on getting them to write a check. Good manners no doubt also plays a part. When someone offers to come in and help out, it would be rude (and bad for your annual appeal to the taxpayers at budget time) if you say "no". I heard one lady asking for an application for voulunteering. So that's how they handle the crush, I thought. Make them apply and commit to something.

When I go in the library it seems always to have at least two paid staffers and one volunteer at work. The need for all this fire power is not apparent. The library is generally not very busy at mid day during the week. I always hope that when it comes time to check out, I can deal with the paid person. There is usually a volunteer at the circ desk sitting next to the pro. I go for the pro, but the volunteer jumps in: "I can help you." They are regularly flummoxed by my out-of-town card and by requests to renew materials that I already have out. They often have to ask the librarian how to handle these matters. I returned a DVD once, on time, and was told when I next visited the library that it was overdue. I went and found it on the shelf. I smell a volunteer.
Posted by Kim Velk at 6:21 AM No comments: