More Art from the Woolfoot Collection 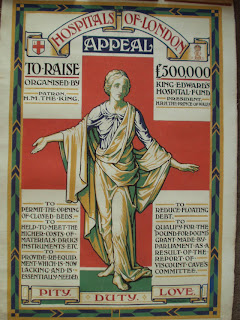 Here is another of my recent acquisitions. This is the original (!) art work for a poster which must have been printed in the early 1920s (dating based on the reference in the text to "Viscount Cave's report." More on that in a minute). It was painted by Frederick Hase-Hayden, who was best known as a glass painter. There must have been some estate-clearings recently over in the U.K.-- perhaps the painter's family and friends are dying off-- as a lot of his work has appeared on Ebay in the last few months. That's where I fetched this at a bargain price. I missed a fabulous original art poster for OXO. Darn. The sellers (I saw two) both referenced auctions in different parts of England as the source of their Hase-Hayden caches. A bunch of watercolors of rural England and Quebec also appeared. The prices they fetched were modest.

I bought a movie poster frame for this, et,voila it was ready to hang. (The picture shows it before it was framed). It is huge, 29 inches by 40. I'll admit I contacted a poster art gallery right after getting this home to see if it would pay off the mortgage. The owner said he thought it was nice but not "super valuable" and advised me to frame it archivally. One day... In a way that was lucky it wasn't "super valuable" because I love it and it adds great atmosphere to the house. It has a few tack holes in the corner and some minor paint loss - the outer dimensions of the printed poster are marked on the bottom of the sheet in pencil (a nice touch).

I have done some research on the fund-raising effort which this poster was designed to promote. (More joy of the internet). I learned the following from a book blurb for Philanthropy and the Hospitals of London: The King's Fund 1897-1990 by F.K. Prochaska (Oxford University Press 1992):

The King's Fund was the leading charitable institution for the support of the voluntary hospitals of London in the period before the creation of the National Health Service and today continues to seek to improve health continues to seek to improve health care and management. Prochaska's readable and scholarly study, with aforeword by the Prince of Wales, the Fund's patron, places the King's Fund in the wider context of the history of philanthropy and social provision. He provides an illuminating analysis of the evolution of the relationship between the voluntary and public sectors.

After I got this treasure home, I checked out the "King's Fund" website - the Fund is still up and running and quite an important institution. They dropped the reference to King Edward at some point. (He was the King in question, the son of Queen Victoria, who got the whole thing started). One of our recent visitors to the Last House works for the U.K. National Health. I showed her the poster, which she admired, perhaps even not just to be polite. She was well familiar with the King's Fund and had been to the offices on more than one occasion, chiefly, as I understood it, for meetings in what I understand to be a fabulous conference room. Of course, before they had a national health system in England they had to pay for health care somehow and voluntary hospitals were the mainstay. These didn't meet all the need, obviously, and after the first World War, in 1921, Viscount Cave was set to study the problem. This is, no doubt, the reference to Viscount Cave's Committee in the text here.
Posted by Kim Velk at 5:49 AM No comments: