People who aren't from Vermont often think of it as unitary and undifferentiated. Of course that's not true. Where ever there are three people you'll wind up with at least two groups. I didn't think of this when we bought our farm here 15 years ago. But I was young and stupid. Of course, Vermont is as socially stratified and divided into "desirable" and less desirable areas as anyplace else. Ask any real estate agent. Of course, because it is a genuinely quirky and idiosyncratic place, it attracts at people who have all kinds of ideas about what constitutes "desirable." Some of these people want to be alone, or in the small town atmosphere made famous in the old show, Northern Exposure. Some people have the E. Annie Proulx take on life - God save us from the kind of people who would only want to live in "nice neighborhoods." The town where the Last House is located is a lot the fictional Cicely, Alaska of Northern Exposure. No Stowe real estate agent would recommend it to a couple from New Jersey or Connecticut!

I have learned a lot from living in a place so much different from the New York suburban subdivision where I grew up. The village where we live now is a place I imagine would be approved by Annie Proulx. But most people from away (meaning the "flatlanders" who inhabit the rest of America) tend to want something a little more like home when they move here or even when they visit. That is one reason why Stowe, perhaps the most famous tourist destination in the state, is the way that it is. Stowe is home to Mount Mansfield, the State's tallest mountain, and the most famous ski resort in Vermont. It has been a tourist destination even before skiing, because of the mountain. It has been combed and groomed to appeal to outsiders: lots of second home owners, retirees, what have you. As a result, unlike almost every other town in Northern Vermont, it has a large tax base. It's transitory and permanent population demand cultural opportunities and at least a couple of places to get ethnic food beyond Chinese. It has rich people who want high quality services, plenty of police and fire protection in Stowe.

I love to go there because it has places that sell coffee and don't also sell gas. It is easy on the eyes. I accept that it is faux Vermont. Fine. A little faux goes a long way to make life in a poor state, a state that is still either the most or one of the most rural states in America, more interesting. One of the things I like best about Stowe is the Stowe Rec Path. I have blogged about it before but when I got back there the other day I had my camera with me and so now you can see how nice it is - and how "Stowe" it is. Check out the signs that greet the visitor within 30 feet of the parking lot. It's positively Swiss. Can you tell that the town fathers are really worried about dogs or dog poop?(And who can blame them?) 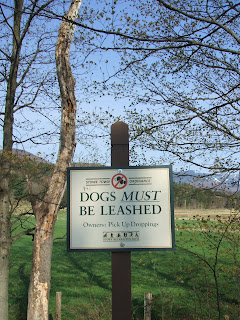 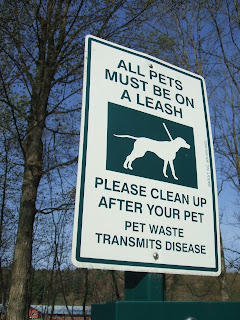 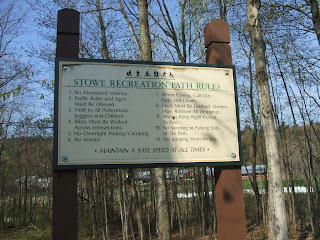 Newport, the Shire Town nearest to the Last House also has a bike path. It is gravel, not asphalt like Stowe, but it is gorgeous in its own way. It follows part of the shoreline of Lake Memphremagog, which is a beautiful lake. If you don't ask a native where it is, however, you would never know about it. I had lived here for years before I knew it existed and it's practically hidden. Also, when the rail line was converted to a bike trail, no one planned ahead for any parking. There is an office park at the head of the trail, but all the business owners have posted very unfriendly warnings: "no parking for bike path use!" The Stowe Rec path, by contrast, is very well marked and has several parking areas; it also has picnic areas, benches, and art installations along the route. Newport - well, someone put a picnic table in one place that seems to be available for public use. Your Stowe tax dollars at work.

Here are a few more pictures I took yesterday on my first Rec Path walk of the Spring. Next time I get to the Newport path I'll take some and give you a little more basis for comparison. 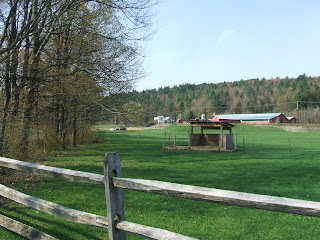 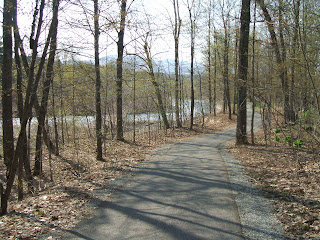 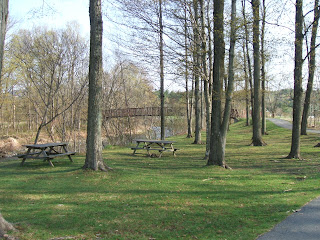 You handful of regular readers will note a few changes to the old Blog tonight. I like them. Somerset Maugham famously said "people ask for criticism but they only want praise." He was right. If you have some praise, leave me a comment. Otherwise, keep it to yourself.

Speaking of Dogs, Have I Mentioned England in this Post? No? OK. Hold On.

By way of a little postscript here, we went for a walk on our one morning in Bath during the England trip with our host. He goes on this walk every morning with his dog. He drops off the kids at their schools and then he and the dog go to a beautiful walking path on the outskirts of the city. He didn't bother with a leash at all. Bike riders, children going to school, other dogs, all much in evidence on this path. His dog went running over a soccer field next to the path that was marked with signs saying "Don't let your dog foul this field." (As near as I could tell, his dog didn't foul the field but it looked like just good luck). All the other dog owners we met had dogs off leash. The owners and the dogs greeted one another - the dogs making me nervous... Not under control, anything could happen! Of course I didn't say anything and it was clear to me that the only one who felt the least bit of anxiety about all these loose dogs was me. (Those Stowe signs had done their work). I suppose this is proof that the English really are a nation of dog lovers. 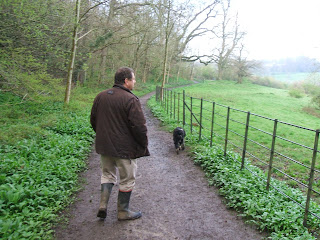 Here's a picture of our friend and his dog (note leashlessess) 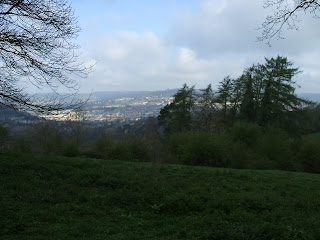 And a shot of the view he took us to see on this little hike.
Posted by Kim Velk at 6:48 AM 1 comment: