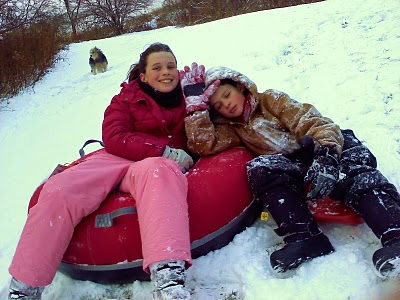 So, here's a picture of Shackleton and the Understudy fetchingly disporting themselves in the fields behind the Last House this PM. Sledding was Shack's idea and I jumped on it. (I wanted a Christmas card picture, so never mind that it's hunting season). A more honest portrait would have included Shack playing "Halo" on Xbox and the Understudy checking Facebook - but they look like crap in the light of liquid crystal displays... There may be a sledding video attached below here. (Blogger seems to be having trouble processing it). Don't worry about it if it's not there. You would not want to watch it unless you are a near blood relative, and even then you'll probably want to bail after the first ten seconds.

We had my Dad and Stepmother here for Thanksgiving. All very nice. We ate the usual stuff and watched endless news reports about people from the ROA (rest of America) storming the battlements of Target and WalMart etc. We shook our heads at them and congratulated ourselves for sitting in the sticks, pointedly not shopping. Well, to be honest, at about 4 PM yesterday a few of us ventured to downtown Newport, VT to the hardware store and bookshop. There were about half a dozen people shopping at the same time, so we coped OK. I thought about giving a couple of them a shove, just for good measure, but no one got close enough.

Even though I was deprived of the opportunity to circle for a parking spot or to compete for bargains, this little foray actually worked out great for us. My step mother presented us with an early Christmas present: a coffee maker/espresso machine to replace the one we got before the Flood and which recently seized fatally. (She had seen me pouring boiling water through a flopping Melitta filter into a small funnel, like the Tin Man's hat, for her breakfast coffee). She also treated us to a new shower hose and shower head. We don't have a proper shower here - just a tub with a handheld shower device affixed to the spout. I always forget to warn overnight visitors that there's a pin prick in the handle that sprays a piercing little stream of scalding water into the palm (and slightly to the west) of the bather... Whusband was polite, but I know he really doesn't want to replace the leaking shower head. (Don't ask).

I hope your holiday was happy.
Posted by Kim Velk at 5:13 PM 3 comments: