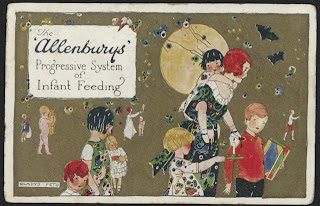 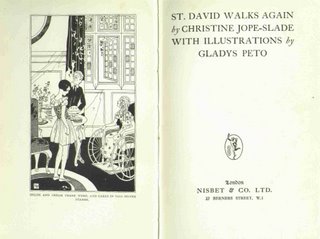 There is a famous line in a famous hymn by Isaac Watts: "Time like an ever rolling stream bears all its sons away" (That's the line, the hymn is "A Mighty Fortress is Our God.") It occurs to me often, though not a very fashionable thought, and certainly when I consider what has become of Gladys. (Leave it to me, with however many generations of dour northern ancestry, to find the gloomy side of collecting old pictures and story books).

Gladys was famous in her day with the kind of fame that I think has a modern day parallel with Isaak Mizrahi or (at least once upon a time) Terence Conran. She was a brand. Her name appeared in large letters above the titles of the books she illutrated and sometimes wrote. In Gladys's 1977 obituatary, her friend, "the Hon. Lady Fisher," notes that in the 1930s it was "the in thing to wear a Peto dress." I think, however, given her times, her intelligence, and an innate dignity that comes through, she recognized the vanity of this. In the aforementioned interview in the Empire Annual For Australian Girls, she talks about how she continued to attend high society events, though bored to tears by them, to keep up her sketching skills. (see my post on Gladys Peto Proto Professional Woamn).

Gladys made her reputation during World War I by drawing caricatures and banners for the society magazine, The Sketch. (I will post a few of those when I can. They are among her best work.) The Sketch was a kind of cross between Town & Country and People Magazine. Gossip, or gossipy columns, reviews of popular plays, dewey photographs of the gentry with news of engagements etc. (Any academic with an interest in cultural history might find several thesis topics in The Sketch.) She also gained fame early on by illustrating the works of our own (American) Louisa May Alcott.

Her own writings came later, in the twenties and thirties, and mostly accompanied Children's books. Many of these she wrote herself (Gladys Peto's Children's Annual for instance made one or more appearances. The scholarship here remains to be done). Among my favorite of her early works is a compilation of stories and poems illustrated by her and written by her and several other bright lights of Great Britain the the 1920s, The China Cow.

Among the contributors were the immortal Sewell Stokes, Christine Jope-Slade, Berta Ruck or C. Lindsay Emmerson (does that last name sound familiar?). While Virginia Woolf and H.G. Wells and other denizens of Gladys's world maintain a hold on our imaginations and some name recognition, the contributors to The China Cow have bubbled under that aforementioned ever-rolling stream. Berta Ruck was a famous novelist at the time The China Cow appeared. She wrote more than 100 books in her day and was married to another then famous writer, Oliver Onions.(Berta was also the brunt of a disparaging remark from Virginia Woolf in Mrs. Dalloway, and that is now one of her chief claims to fame). Christine Jope-Slade who wrote plays and screenplays during the 1920s and '30s including the unforgettable, The Mad Hatters and Britannia of Billingsgate . Sewell Stokes is an interesting figure. Knowing his association with Gladys I bought his memoirs, Personal Glimpses. In it, he confesses to having asked Gladys to marry him (he had contacted her about providing some artwork for his college (Cambridge somewhere) magazine. He beggared himself to take her to tea, commenting that she had the most beautiful hands in England. She politely declined his offer of marriage and he tried hard to forget her. A task made extremely difficult by the fact that Gladys Peto images stared down at him from every " 'bus and tube." (He referred specifically to the Allenbury's Food poster that appears in post card form on this blog.) Another aside, this is one of the really fun things about collecting, finding things like this. Stokes wrote many books, screenplays and plays, including a movie about Isadora Duncan. According to his memoirs (written when he was still a young man in the tone of a sarcastic undergraduate) Peto called him shortly after she refused him to tell him she was engaged. The man she accepted, Colonel C. Lindsay Emmerson, who, as noted, was also a contributor to The China Cow.

Next time I get an hour to myself, I'll tell you all more. I am sure there are legions of you out there panting to know more! (Did someone say "sarcastic undergraduate?")
Posted by Kim Velk at 7:22 AM No comments: